9 Best Sports/Games to Play While Drinking 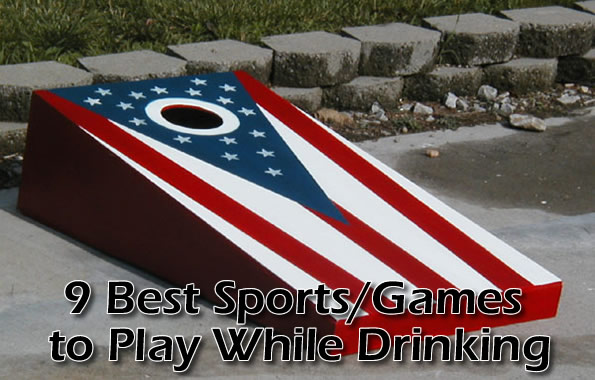 The criteria for a good drinking game are pretty intuitive. Games should be turn-based, require little to no exertion, and require little to no attention while waiting for your turn. Bonus points if the game requires little to no specific equipment or location. By those accounts, tennis is a really crappy game to play while drinking. And hockey is awful as well. 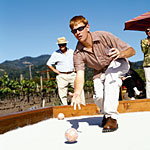 A very European game. And when you’re looking for mindless lazy games, you can always trust the Europeans. They gave us golf, after all. This game is almost TOO chill for drinking. There’s a reason that everyone who plays is is drinking those tiny espressos. Because it’s pretty damn boring. But if you are drunk enough, and you create a tournament, it’s a pretty great way to spend an afternoon. Also, when played with teams of two, it’s a pretty great way to get couples to fight with each other. Gold. 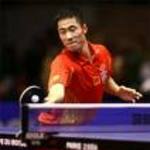 Ping pong is really hard to play with anything more than a minor buzz. It’s a game that involves constant attention, timing, dexterity, little balls, and tiny paddles. On paper it’s probably the worst game/sport to play while drinking. But one cannot rule out the sh*t talking factor. While other games require you essentially to play against yourself (pool, darts, horseshoes), ping pong requires you to face and react to your opponent, allowing, nay, encouraging, gloating, trash talk, and other intimidation factors. Make your friend feel like the bitch he truly is. Play some ping pong with him over a few chardonnays. 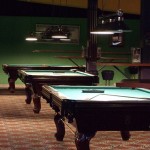 Widely available at bars, this game serves a very specific purpose. It allows two men to hang out with each other and drink without actually having to speak with one another. It also allows people to go to a bar at three in the afternoon under the guise of not just drinking. For instance, “Wanna shoot some pool?” means, “I’m bored. Let’s get loaded at a bar and pretend we’re doing something else.” It also moves fairly slowly, which means that you don’t have to remain too attentive. Also, no bad your opponent is, you can still enjoy yourself, unlike ping pong, where, if your friend sucks, you’re kinda effed. 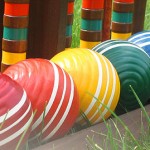 Good news: Croquet can be played most anywhere. Croquet is one of the few drinking games that gets your candy ass outside in the sunshine for an hour or two. Croquet allows you to mercilessly screw over your opponents by bumping their ball, then doing that foot-smash-hit thing that allows you to knock their ball off the lawn and down the street into traffic. It’s also slow paced enough that you can socialize without feeling like you’re tethered to the game. Because croquet is so blue-blood, you might want to consider drinking some snotty drinks like Kir Royales or gin gimlets. Also, quote Heathers early and often. If you don’t know what I’m talking about, for God’s sake, please see Heathers. 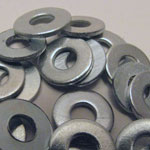 Are you too lazy for even horseshoes? Admit it. You are. Well, in typical American fashion, a less-labor-intensive derivative has been established. It’s called washers. I’m not sure there is a governing body for washers, but the rules are painfully simple. Go into your buddy’s front yard, insert a four-inch wide pvc pipe into the ground and clear it out, essentially making a golf hole. Then go 15-20 feet away and do it again. Get some tiny washers from a hardware store and try to toss them into the holes in the same fashion you would horseshoes. That’s pretty much that. Keep score. Or don’t. This isn’t really a “keepin’ score” type of game. It’s more a “try to stay vertical while you shotgun rum” type of game, which is pretty cool in its own right. 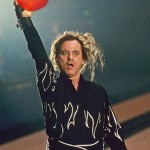 Perhaps the greatest drinking sport there is. The only downside is that you can’t play just anywhere, but rather must pop into a bowling alley, which I see as a benefit. Bowling alleys are strange havens, especially after a few drinks. The people at bowling alleys are generally about as weird as people in bus stations, which means you can get away with a lot of questionable behavior without getting called out. Bowling is social, and it’s also just physical enough that you’re able to fool yourself into thinking that it’s some sort of exercise. Also, you can spend the whole afternoon dropping lines from Kingpin, which is probably the greatest aspect of the whole affair. 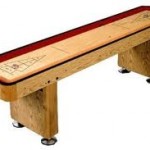 A bar game in the truest sense, this guy has teamwork, screwing over the competition, a learning curve (especially when you learn the intricacies of a certain table). You don’t even need to retrieve your pucks (stones?). Once you send them down there, the other team sends them back. Also, you can offer to play against strange girls, allowing you to pair up with one for the duration of the match and lay down your weak, weak game. Who knows? Even a broken clock is right twice a day. 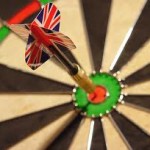 Darts actually lends itself to drinking more than it does sobriety. Except for the fact that you want to be careful when you’re chucking around shiny steel bikes around a crowded bar. Whatever. No one’s ever gotten hurt with an errant dart. Just kidding. I’m sure they have. I was baiting you. Please put your awesome dart accident stories in the comments. Anyway, many readers are probably familiar with the 3-5 beer window in which a person can reach their dart performance peak. Any fewer drinks and they’re too nervous. Any more and they’re not coordinated. So drink 3-5 beers, play some darts, then when you’ve hit the 5-beer threshold stop playing darts and wrestle your friends and go harass women. 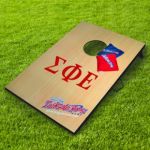 Also called “bags,” this game is about as simple as it gets. Land the beanbag on the bored for one point, or in the hole for three. First one to 15 or 21 or whatever wins. This game travels quite nicely and is a tailgating staple. There is a tiny amount of skill and strategy involved, so it’s a little more dynamic than horseshoes or washers. A healthy mix of sh*t-talking, fun, strategy, outdoorsy-ness (made that word up), and teamwork, this one tops my list. Best game to play over cocktails.