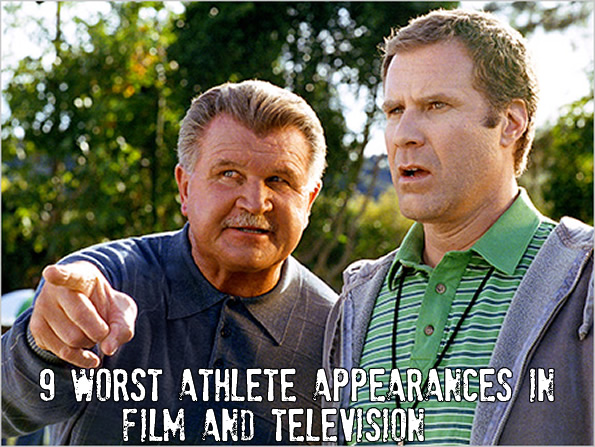 There are many, many, many horrible athlete cameos, stemming from the 1980’s, when athletes would show up on very special episodes to tell little kids not to smoke pot or start gambling. Which is ironic, because so many pro athletes love to smoke pot and gamble. Well, they also like to act, which isn’t always the best idea in the world. They should stay on the field in these instances and leave the acting to actors. It’s just crazy enough to work.

What’s the bad boy of tennis doing in this film? I haven’t the foggiest notion. It seems to be more suited to an “actor” than it does Mr. McEnroe, who doesn’t really have any relevance to the film, other than he loses his temper in a pretty unfunny scene in a pretty unfunny movie. In Sandler movies, sometimes the randomness pays off (Lee Trevino, Bob Barker, Billy Idol) and sometimes it doesn’t. See below as well.

LT’s self-deprecating turn in The Waterboy was supposed to come across as charming, but instead, seeing a (reformed?) crackhead tell a bunch of kids not to do crack doesn’t really work as a joke, and it brings the movie to a grinding halt in three short words. Not exactly the right tactic for a comeback of any type.

Shaq is likeable and fun, no doubt. But he has trouble…speaking. Not really on the “speaking” end, but on the “being understood” end. He’s a mumbler. And he’s gotten better, as this clip from Blue Chips demonstrates. I’m waiting for marbles to start stream out of Shaq’s mouth and falling to the floor. Spoiler alert: It never happens.

Howie Long wasn’t an athlete when he had this supporting role in Broken Arrow, but it was close enough to his retirement that I’m not inclined to split hairs. He had been wowing American with his advertising skills alongside Teri Hatcher for Radio Shack, which makes his shortcomings here all the more devastating. This might be a tough pill to swallow, but…he’s not a very good actor. He’s actually bad.

Of course, next to John Travolta in a cheesy action film, it’s hard to look THAT bad, but Mr. Long does a pretty good job of it. Thankfully, he’s moved to sports studios, where he’s made quite a name for himself. Keep it in the studio, Howie.

Mike Ditka has his moments. When he’s got a reputation for being such a hard-nosed, no-nonsense guy, it’s easy to get laughs by playing both to and against the stereotype. He had a great cameo on Saturday Night Live with “Da Bears” guys, but stretching a cameo into almost a starring role in Kicking and Screaming doesn’t really work. Who wants to see that much Ditka? Not even his wife, I’m guessing. The mustache is only funny for so long.

I’ve long held that Chris Bosh is one of the least charismatic people in sports. So why, when they have virtually every athlete at their fingertips, do the producers of Entourage pick Bosh to pop up? It’s not even funny on a randomness level. You want random, you go Brian Scalabrine. You want A-list, go Shaq or LeBron. You want to confuse people, get Chris Bosh. Entourage went the third route.

The X-Man got props in this Seattle-centric Cameron Crowe film. His role? He was what the protagonist (Campbell Scott) thought about when he didn’t want to climax too early during sex. So seeing Xavier directly a address a guy that’s thinking about him during sex is a little off-putting. Everyone knows you’re supposed to think about Troy Aikman. Right? Right? This cameo is also just said because it harkens back to the days when Seattle had an NBA team and OKC…didn’t.

2. Bob Golic – Saved by the Bell: The College Years

The athletes that must have the hardest time adapting to the big screen are surely NFL linemen. They just don’t have the sense of showmanship that the skill players have. Take for instance Bob Golic, who, for some reason, it was decided was the absolute best fit for this horrible, horrible show. He basically plays a grown-up Screech, which is every bit as awful as it sounds. Mercifully, the show was cancelled early, but Golic still haunts the dreams of aspiring actors everywhere.

I know that speaking ill of Chuck Norris will cause his beard to punch me or for him to impregnate me with his stare, but it has to be done. Dude isn’t a very good actor, even after many years of experience. No matter what his role, it seems as though he is on an after-school special doing a walk-on. Perhaps a silent Chuck Norris would work in these roles, but a talking one is just a little too stiff to take. Stiff like the boards that Norris can break…with his mind. Or something like that. Whatever.