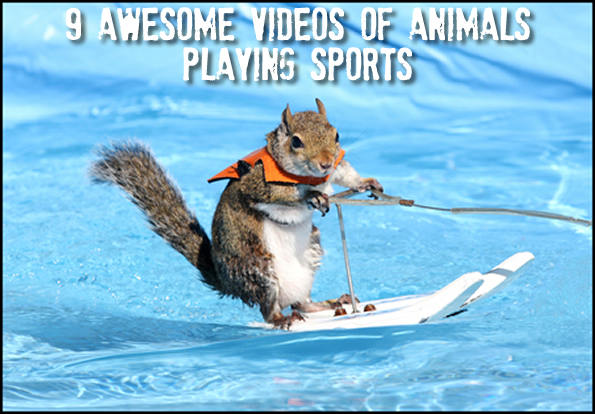 I’ll be the first one to admit that this daily piece is culturally biased. For almost a year now, I have been focusing almost exclusively on human athletes. Well, that stops now. I have overlooked a large segment of the sporting population, and with today’s piece, I would like to move the spotlight to some overlooked heroes of sports. Namely, the dogs, cats, squirrels, birds, hamsters, and other animals that can do everything that people can, just much, much cuter.

Kimo pops up at 1:00 on this video and proves that Border Collies don’t just tend to sheep. They are also, like, totally killer Frisbee dogs, man. I didn’t know that Frisbee dogs existed after like 1989 (I thought maybe they had gone extinct), but this is way more impressive than that Westminster Kennel Club stuff.

When you get “One Shining Moment” involved, it’s really not a fair fight. It could be a 20-second loop of me tying my shoes, and I could make this list. My favorite moment? At 1:50 two hamsters throw down a monster dunk, immediately followed by a yellow lab humping a basketball. Sure you can see the latter in an NBA game, but it’s not nearly as cute.

Please disregard all the efforts in this video to make it “cute.” They are obnoxious and dumb. However, what’s not obnoxious, nor dumb, is this 3 year-old Jack Russell’s ability to move with the ball like Pele. Or Freddy Adu. Or Ronaldo. Any good soccer player will do. This gal can move down the field balancing the ball on her head, which is something I wasn’t even able to do as an 11 year-old human. Man 0, Dog 1.

Tillman skateboards much better than I do, but that should comes as little surprise, as it has four legs and I only have one. Actually, I have two, but I wanted your sympathy right there. This dog has risen to fame thanks to an appearance on an iPhone commercial. However, we are quickly reminded that the athlete in question is a dog at the 20-second mark as it tries to swallow a skateboard wheel. High comedy.

Now this nothing THAT remarkable athletically about this cat. It balances on a surfboard, which should come as no surprise due to cats’ innate sense of balance, however, the cat’s owner “Janice,” seems determined to make the cat enjoy water, something cats naturally hate. Seeing as how I hate cats, watching a cat do something I know it hates makes me happy inside. Maybe she could teach it how to tend to birds next. If you’ve ever wanted to see a cat swim, this is your video.

4. The Fastest Swimming Dog Ever

I would call this animal the canine Michael Phelps, but this dog hasn’t done any obnoxious Subway ads, nor does it smoke but with its huge lings, so I’m inclined to give it a pass there and just call it a very, very fast swimmer. And a strong one, considering it pulls a 180 and swims back upstream for a spell. Lassie should be ashamed of herself after seeing this video.

This nameless whippet covers 100 yards in about 7 seconds, which makes me yearn for the dog to pull one of those little Usain Bolt chest bumps at the end of the race, but no dice. Even once the ground is covered and the record is set, it’s amazing to see the pup sprint around in circles, as though the 100 M dash was just a stroll.

(And yes, I’m sure there are faster greyhounds and race dogs out there, but seeing a dog move like this in a natural environment is way more impressive.)

Thanks, Anchorman! I’m amazed by this feat. Not so much by the squirrel, who stands on a fairly large plexiglass board that is just made to look like two small skis, but by the person who a) captured a squirrel, and b) decided that this squirrel was going to learn to waterski. Did the squirrel have any say in this whatsoever? Regardless, the end result is pimp as hell.

1. The Longest QB-WR Connection in Frisbee

Montana-Rice and Brady-Moss have nothing on this anonymous master and dog as they slaughter the distance record for Frisbee-tossing in Japan. Though I’m sure the dude has to have a pretty steady hand as he launches the disc, I’m pretty comfortable giving most of the credit to the dog on this one, as that little guy covers ground in a fashion that most sports fans haven’t seen since the days of Willie Gault. Impressive enough for the #1 spot on this list.