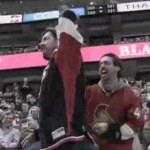 Despite sitting in last place in the Eastern Conference, plenty of Senators fans were in attendance to watch their team take on the Washington Capitals at the Scotiabank Place on Friday night, and when Rebecca Black’s “Friday” started playing on the arena speakers, two fans couldn’t resist the temptation to get up and celebrate the weekend in style.

Luckily the entire incident was captured on camera and displayed on the JumboTron for everyone to see.

On most nights this would be just about all the entertainment that Sens fans are treated to, but not on this night, as the home team came away with an unlikely 2-0 victory.