Oh mascots. You pretty much just appeal to little kids and the mentally handicapped, but every so often, you do something that’s very unbecoming (and normally a little mean) that makes us fall in love with you all over again. The more out of line, the better, as it’s a perfect linear relationship. Under the cover of a giant, hot, furry outfit, you can get away with some depraved examples. Enjoy.

Kind of mean, which is just code for “really funny.” This mascot raises the stakes by surprising and beating the hell out of a ref for a second. I feel bad for the ref, as it’s hard, if not impossible, to maintain composure and look cool after something like that. It’s hard enough to look cool as a ref in the first place.

8. Houston Rockets Mascot Scares the Crap out of Everyone

Probably the truest “prank” on this list, this looks like fodder for “America’s Funniest Home Videos.” Totally dumb, but still funny and wildly entertaining. If someone gets a coronary or a stroke, can they sue? I would think so. That mascot can be really surprising. I’m guessing the bear also taught a whole generation of Rockets fans to hate and fear mascots.

Oh yeah. This guy is just being a jerk. As some schlub watching YouTube, I think it’s very, very funny. If I was a fan or player on this team, I would not think it was so funny. He gets teed up twice, and keeps going. I would have killed him if I was playing ball on that court for the home team.

There’s not too much to explain here outside of the title. Did the mascot dude and the cheerleader have a friendly conversation once he ate her? Did he flirt with her? In my imagination, they went through all the stages of a serious relationship in the 40 seconds she was in the mascot costume with the mascot guy.

Is the umpire in on the joke or not? It’s really hard to tell. In my mind, for humor’s sake, he’s not in on the joke, and he’s very upset that he is being mocked. But why does he stay out there, stationary? Is he trying to maintain a quiet dignity? Cause it’s not working.

4. San Marcos Mascot Is a Mole! 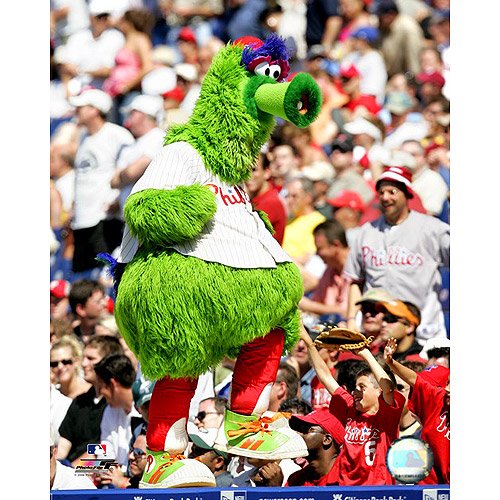 There isn’t any video of this, as best I can tell, but I remember it distinctly over 10 years later. The Phillies were playing the Braves in what I remember to be a playoff game and the Phanatic was on the road with the Phils in Atlanta. The Braves fans started that godawful Tomahawk Chop, and the Phanatic took to pretending to jerk off to the same rhythm as the Philies fans. The camera cut away almost instantly, and I couldn’t stop laughing.

I didn’t know that little boys qualified as “mascots” in the Premier League until I saw this video, but it’s pretty clear that they do after hearing the announcer refer to him as a mascot. What’s far more interesting though is what this boy does. He goes to shake a rival player’s hand, then pulls back and does the “combing the hair with your hand” thing. Kind of awesome. That kid is going to be president one day. President of England.

This isn’t so much a “prank” as one mascot just leveling another, but it’s absolutely hilarious in my book, so it gets the top spot. It’s not clever, it’s not nice, but boy is it something. Someone’s got pent up frustrations from not making the team. Nice form on that tackle, btw.