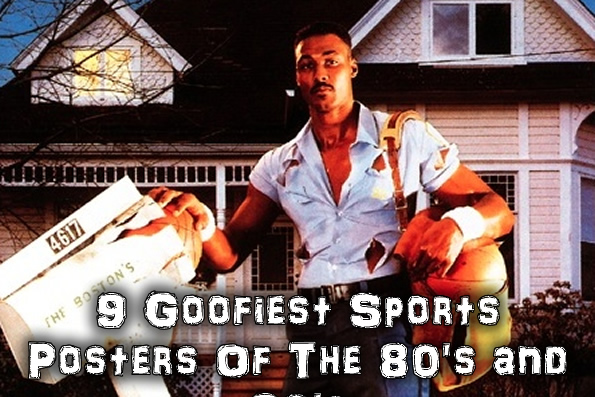 Simpler Times. That’s the only thing I can really say in a half-assed attempt to explain why such rich, famous athletes would get duded up like schmucks to personify puns made of their names. *Deep breath*

I don’t know why I feel compelled to explain their actions. The posters are hilarious, as it’s always a hoot when well-off people lose some dignity. Like A-Rod being fed popcorn like some sort of dumb toddler. Perhaps you’ll recognize some of these posters. I had Warren Moon hanging over my bed for a while. Not the person…his poster. In case that wasn’t clear. 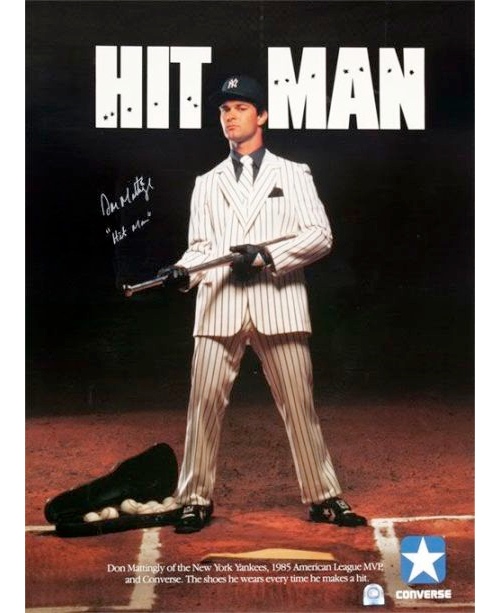 Don Mattingly with his mustache shaved off looks weird. This entry also kicks off an alarming trend of “costume designers that can’t differentiate between mafia clothing and ‘Guys and Dolls’ wardrobe rejects. I think Carlos the Jackal should have nothing to worry about if this guy is his competition. 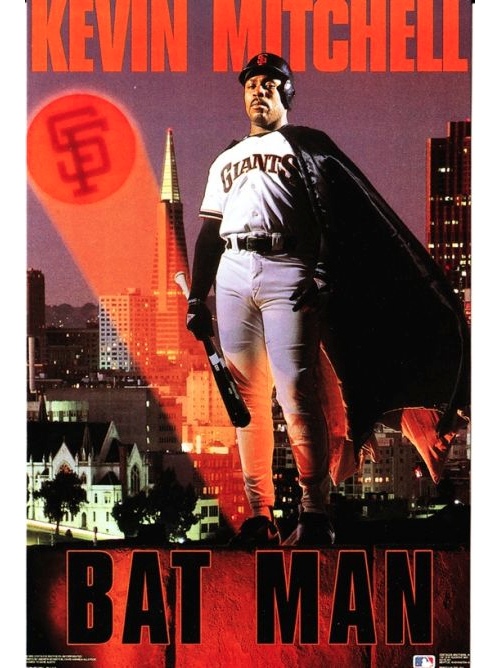 “Bat Man?” Oh-kay. I love it when an arbitrary nickname is tossed upon some arbitrary player. “Kevin Mitchell? Oh…uh….he’s the ‘bat’ man. Now take that information and please craft the most hackneyed ridiculous poster you can. Get out of my office!” Poster companies had a way of shoehorning nicknames and titles onto players with all the care and attention of a monkey at a dartboard. 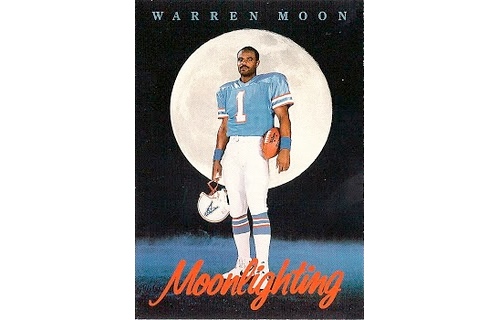 I have a soft spot for this poster, as Moon was my favorite NFL player and “Moonlighting” graced my wall until “Nevermind” replaced it. If I ever meet Warren Moon, I’m going to let him know that the poster that knocked him off my wall was one of a little baby with a little baby penis floating in a swimming pool. That’s an ego deflater.

Anyway…what the hell is “Moonlighting” about? That’s like the laziest pun there is. They could have at least gone with something like “Moon Man” or “Lunar Rover.” I kept this poster up even after they gave up 35 in the second half of the Bills Wild Card game. This poster sat over me while I killed two hamsters with my childish negligence. I deserved better. 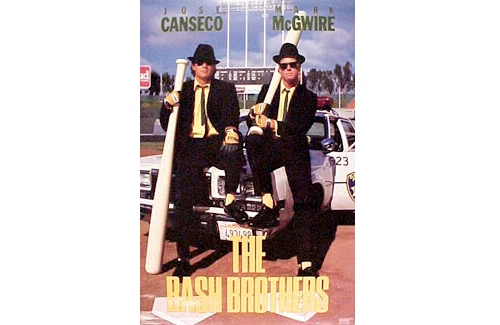 Ironically, the mafia stereotypes ring true, as these guys are both huge, untouchable criminals. I don’t know what else to say here, other than this reminds me of a time when these guys actually played a sport instead of writing tell-all books and lying under oath. Also, those huge bats should have been a red flag. They would have had to be juiced to wield those things. 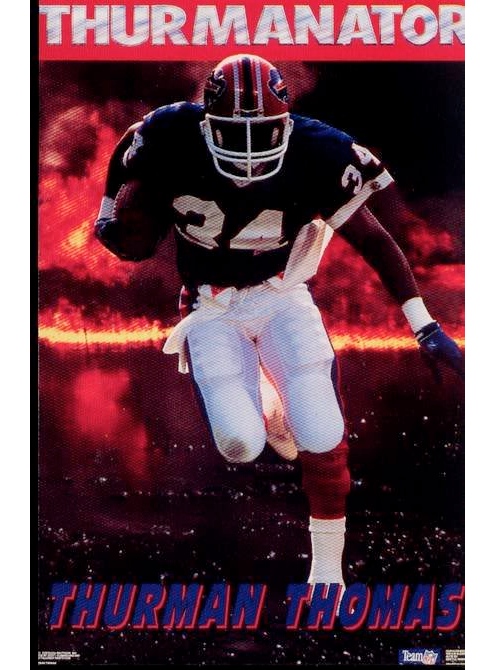 Is there a less-scary movie character than “The Thurmanator?” Once it was revealed that this guy couldn’t find his helmet during the Super Bowl, I think he lost the intimidation fact. Nonetheless, A+++++ for the visual effects here. How did he not get engulfed by those flames during that photo shoot? These poster makers would have a field day with Photoshop. 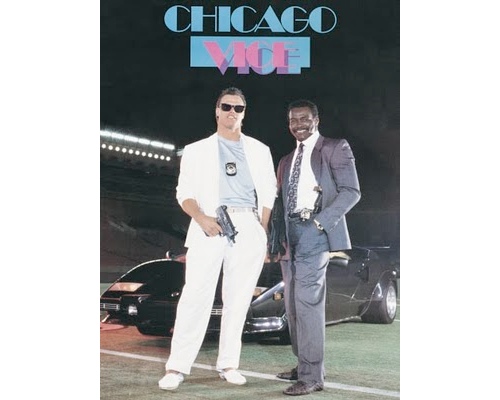 Jim McMahon and stupid marketing ideas go together like chocolate and peanut butter. There is nothing this guy wouldn’t sell. I bought a paintball gun that this guy endorsed in 1988. It never worked. Not once. I expect this crap from McMahon, but not from Payton. Walter was as distinguished as his mustache. Having him dress up like Tubbs from “Miami Vice” is just insulting. Granted it was his choice to do it, but I’m gonna fault McMahon for this one. And who gave him an uzi? 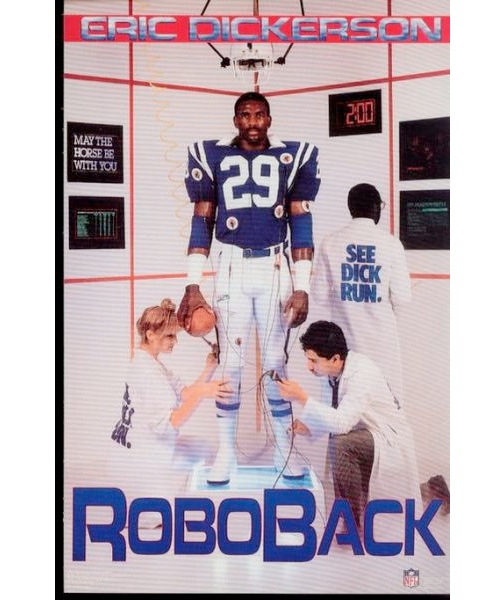 No one every called Dickerson “RoboBack.” Nobody called anyone “RoboBack” because it’s a horrible, uninspired nickname. Was this because he wore glasses? If that’s the case, then I’m going to start calling myself the bionic writer. I’m half-surprised there’s no cheesy Robocop quote like “Dead or alive, you’re blocking for me.” The only thing super human about Dickerson was his Jheri curl. Recognize. 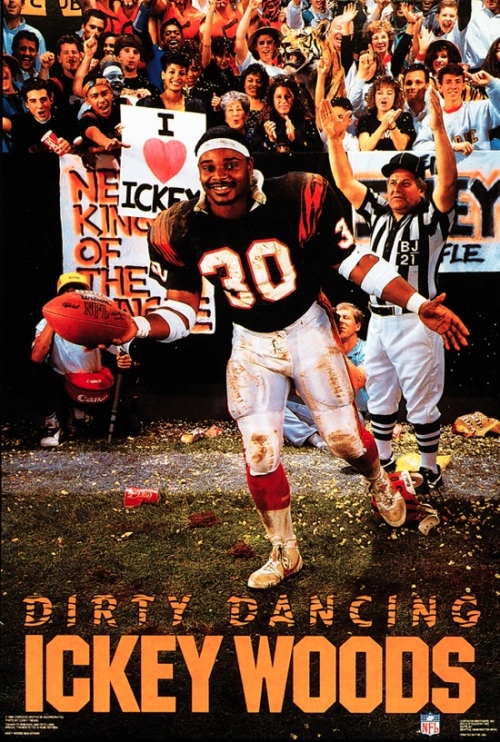 I don’t know if the Ickey shuffle was particularly “dirty dancing,” but when you’ve got a running back who is known for wobbling back and forth uneasily, I guess you have to make some sort of dancing reference, and I’m pretty sure that Dirty Dancing was stealing everyone’s heart around this time. Nobody puts Ickey in a corner. 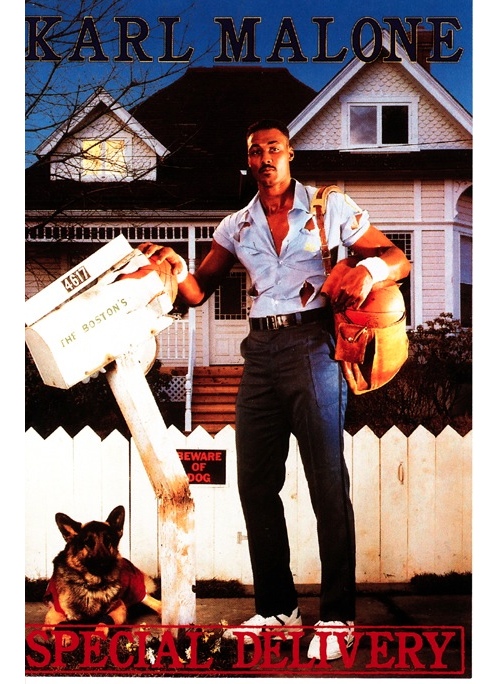 Hey! This one actually kind of makes sense! It’s his actual nickname, and he’s dressed up like a mailman. Of course, the do make that stupid “special delivery” pun, but I’m almost inclined to forgive that due the fact that this whole scenario is grounded (somewhat) in reality. Let’s walk away here and pretend that all these posters were tasteful and made sense. Just don’t look at the Kevin Mitchell one again.