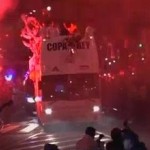 It has been 18 years since Real Madrid last won the Copa del Rey, but on Wednesday they would recapture the Spanish trophy with a 1-0 extra-time victory over archrivals Barcelona.  Cristiano Ronaldo’s header in the 103rd minute placed the cup back in the hands of Real Madrid, but it didn’t stay there for long, as defender Sergio Ramos dropped the 33-pound trophy from the top of the team bus during their post-game celebration through the streets of Madrid.

The right front wheel of the bus would proceed to run over the cup before finally coming to a halt, as workers attempted to gather the pieces of the trophy.  It was eventually taken back into the bus, but did not make another appearance during the celebration.

The cup will now undergo repairs before being placed in the team’s trophy case, alongside the other silverware won by Real Madrid over the years.

Here is a look at the Copa del Rey getting thrown under the bus.