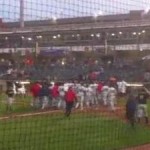 Bryce Harper, one of the most highly touted baseball prospects ever and the Washington Nationals 2010 first overall draft pick, has yet to play a game in the big leagues, but that hasn’t stopped him from making a few enemies at the pro level.

Among those enemies is West Virginia Power starting pitcher Tyler Waldron, who exchanged a few words with Harper after striking him out in the third inning of a minor league game last night.

After being called out on strikes, Harper stood at the plate and removed his gloves and helmet while jawing with Waldron before eventually following him back to the Power dugout.  That caused both benches to clear, but order was eventually restored before hostilities could escalate.

Harper also hit a home run off Waldron in the first inning, his fourth of the season.  He is currently batting .286 with a .554 slugging percentage and a .394 on base percentage.  If he continues to find success at the plate with the Hagerstown Suns, it may not be long before he is starting bench clearing brawls in the Majors as a member of the Nationals.