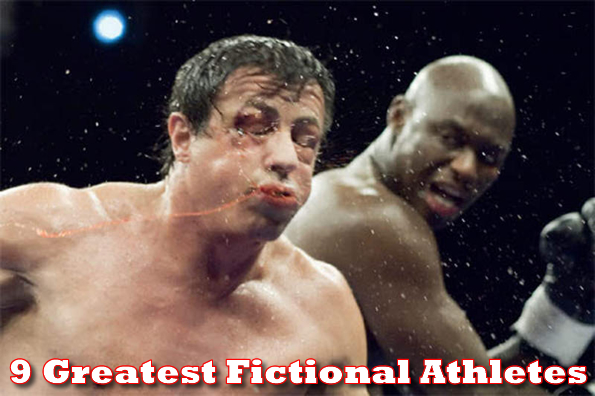 Real athletes are okay, I guess. But I don’t like to relegate myself to the world of non-fiction when selecting the greatest of all time. There are just too many great athletes that benefit from cuts, favorable editing, and many other tricks of the trade in order to rise above the realm of reality to become the best. Seeing some of these guys in action would be like seeing a Beatles/Nirvana double bill at your favorite club. In other words, really, really good. Disagree in the comments. I double-dog dare you.

While his short game originally left something to be desired, under the tutelage of Chubbs, Happy was able to round out his game and eventually obtained the whole Package. That said, his strength was and always will be his distance off the tee, which I conservatively have calculated (with a team of mathematicians from MIT) at 480 yards per drive.

Sometimes, it’s all just a function of finding your happy place, which may or may not involve midgets holding pitchers of beer. Move over Shooter, McGavin, there’s a new guard in town.

Despite not having the best coaching, Jimmy Chitwood was able to lead a remarkably small school to state championship simply by never, ever, ever missing a shot in the final game. I mean, he missed a few, but he had skills that no other high school player could dream of, save for Neon Boudeaux a little further down the list. However, unlike Neon, Chitwood’s game was refined. Whether or not he will be able to make the leap to college or possibly the NBA is uncertain, as there are some questions about his size and defensive abilities, but when the game is on the line, there is no one you’d rather have shooting.

Sorry, Ricky Bobby. Cole Trickle is the consummate NASCAR driver. Discipline issues exist, as he often ignores his crew chief, but The bottom line remains that Cole is a smart, calculating driver that remains a step ahead of the back on the Winston Cup circuit. His career was put in jeopardy after a very dangerous crash drove him into the arms of his doctor, but he was eventually able to put that incident behind him and learn how to pass high side in turns once again.

While Cole rules the roost for now, keep an eye out for Rusty Wheeler, a cocky young upstart who could give trickle a run for his money.

Rocky’s a pretty good boxer, despite dropping his fist championship fight. That said, he has some lackluster tendencies in most every fight. First of all, he often finds himself bloodied and bruised in early rounds, forcing him to make a miraculous comeback, often set to inspirational music. His tenuous grasp on the English language, coupled with a mumbly speaking voice will almost certainly limit any endorsement contracts.

However, he was able to singlehandedly crush communism. That really shouldn’t be overlooked when examining his legacy.

Scott Howard is a night-and-day basketball player, and you never know which version of him you are going to get. The dichotomy was lessened though, when late in the season, he found a way to harness his wolf powers while in human form.

Making his accomplishments all the more impressive is his lackluster supporting cast, which includes a power forward by the name of “Chubbs” who clocks in at about 5’8 and roughly 255 pounds.

Also, the fact that he’s an effing wolf could result in a scenario that makes the Artest melee look like a day at Disneyland.

Raw and uncoached, Neon Boudeaux exudes an explosive approach to the game. His power and strength simply cannot be matched a the college level. Of course Boudeaux is not without his drawbacks. Getting his entry into college was difficult, as he is functionally illiterate, and there are questions about whether he actually took the SAT himself or had someone sit the test for him. However, with Butch McRae bringing the ball up and dishing the rock, I would expect Boudeaux to be a one-and-out player, the likes of O.J. Mayo or Kevin Durant.

What happy Gilmore had in the long game, Ty Webb exhibits on the green. The man simply doesn’t miss a putt. Like another prominent golfer, though, there have been questions raised about Webb’s promiscuity off the course, as well as his level of dedication to the game. It seems that his skills reside in his god-given talent, which is enough for now, but if he were to face stiffer competition than that of Bushwood, it’s unknown how he would fare.

We’re taking a flyer here, as Adam banks is only 13 years old, but has demonstrated abilities not seen since you Wayne Gretzky scored over 300 goals in a junior season. Originally playing for the juggernaut Hawks squad, Banks found himself, due to gerrymandered district lines, only eligible to play for the upstart Ducks. Gordon Bombay’s unorthodox approach seemed to be a perfect fit for Banks, who sustained a wrist injury early mid-season, but returned to play in the championship game against his old team. Look for Banks to make the leap to a pro team in short order on his way to the NHL.

Despite a promising comeback by former wunderkind Roy Munson (who lost his hand in a freak ball-return accident), Big Ern demonstrated why he was the best in Reno, eking out a victory that solidified his stranglehold on the #1 spot. He has demonstrated ball control and spin techniques that no one else on the tour can touch, including being able to roll the ball forward, “pull the string,” then “punch the ball forward. It’s a real thing of beauty. He truly is the greatest athlete in the world. There is no room for discussion.