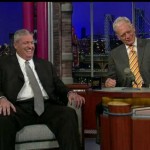 Okay, so perhaps the title is a little misleading.  Rex Ryan didn’t exactly talk about Brett Favre’s dong, but he sure did seem to get quite the laugh out of it when he was questioned about it by David Letterman during last night’s segment of “The Late Show.”

Some of the other topics that Dave and Rex covered were the lockout, the draft, Sal Alosi’s sideline interference play, and Ryan’s new book, titled “Play Like You Mean It.”

As for the topics they conveniently left out, that would undoubtedly include the feet of Rex’s wife.  I guess they ran out of time before getting into that discussion.