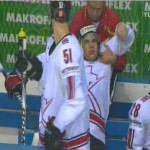 During a preliminary round game between Canada and Switzerland at the IIHF World Hockey Championships earlier today, Phaneuf leveled Moser with a clean check in the middle of the ice.  Moser appeared to be alright as he skated off the ice on his own power while play continued, but moments later as he was being attended to at the Swiss bench, he reportedly swallowed his tongue and fainted, causing the referee to halt play and call for the stretcher.

The scene was a rather scary one on the Swiss bench, but surprisingly enough, Moser was able to skate off the ice on his own power and eventually returned for the third period.

Much like Moser, his Swiss teammates would put forth a spirited effort, but in the end it wasn’t enough as Canada would go on to win the game in overtime, 4-3.

Here is a look at Phaneuf’s hit, as well as its aftermath.