9 of the Most Charitable Athletes of All Time 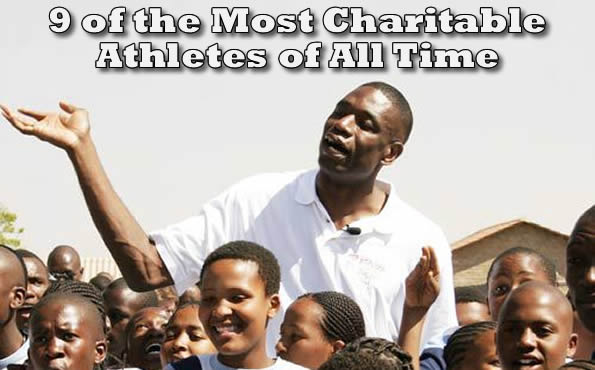 Professional athletes worked hard to get where they are, and they continue to work hard day in and day out to stay on top of their game. However, the guy who picks up my garbage works pretty damn hard, too. Same goes for the dude who drives the bus down my street and the lady who brings my mail. But they don’t get paid millions of dollars a year. Now, I’m not saying professional athletes shouldn’t get paid a lot. I’m just saying that, even with all their hard work, they are still pretty lucky they were born with natural ability and provided the opportunity to develop it. And while today’s TMZ culture prefers to focus on the less virtuous activities of our sports celebrities, there are also a great many who know how lucky they are and give back to society. Instead of spending all their free time relaxing on tropical islands sipping Mai Tais, they go around visiting sick children and donating money to inner city schools. So let’s take a moment to shine the spotlight on good guys for once, instead of the dopes getting arrested for shooting people in night clubs (usually members of the Cincinnati Bengals). To that end, here’s 9 of the most charitable professional athletes of all time. 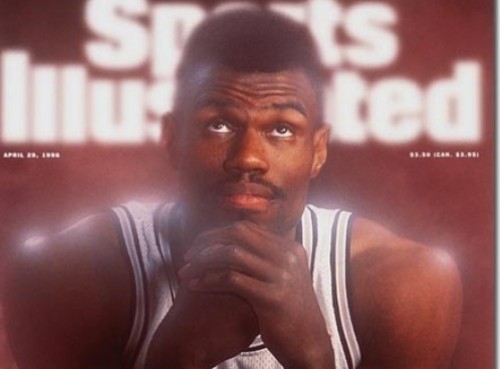 He was known simply as “The Admiral” during his days in the NBA winning championships for the San Antonia Spurs. But in addition to being one of the greatest centers in basketball history, David Robinson is also a seriously generous dude. In 1997, Robinson donated an unprecedented $5 million to found a college prep academy in an economically challenged San Antonia neighborhood. But he didn’t stop at $5 million. In fact, to date, David Robinson and his wife have donated over $11 million to Carver Academy. And it’s not even named after him. However, the NBA’s community service award is. 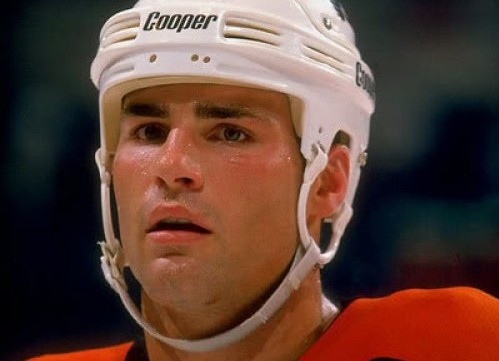 In November 2007, on the day he announced his official retirement, former NHL all-star and MVP Eric Lindros also announced that he would be making a $5 million dollar donation to the London Health Sciences Centre in London, Ontario. Lindros was born at the hospital, and over the course of his career had numerous procedures performed there. Now, it may seem strange that Lindros’s $5 million gift ranks higher than David Robinson’s $11 million gift. But what you have to understand is this: over the course of his career, David Robinson earned twice as much as Eric Lindros. In other words, for a hockey player, $5 million is pretty freakin charitable. 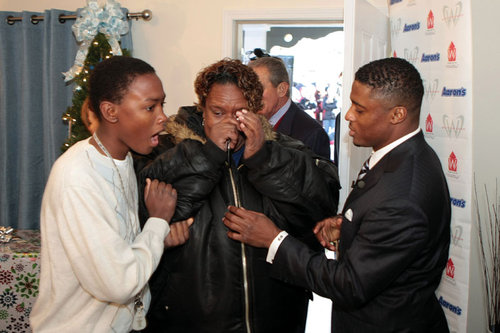 It’s not clear exactly how much money Warrick Dunn has donated over the years, but that (undoubtedly huge) number isn’t important. The number that is important is 100. That’s the number of single parent families the former Tampa Bay Buccaneer has helped out by making a down payment on a home. His aim, with his Homes for the Holidays program, is to help other single parents provide what his mother—a police officer killed while working as a security guard to make extra money—was never able to provide: their very own home. Talk about a direct impact in your community. 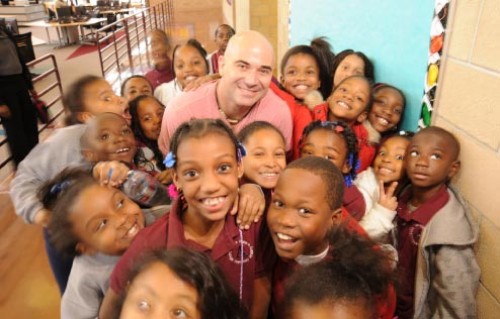 Tennis great Andre Agassi didn’t have a classy country club upbringing. His Armenian-Assyrian father was a bit of a taskmaster who once forced the 9-year-old tennis prodigy to play a match against football legend Jim Brown for $10,000 (later reduced to $500 after Agassi won the first two sets 6-3). This probably explains why he went on to be quite a rebellious young man whose tennis career almost ended before it began. Today, he wants to make sure other kids get the same second chances he got. So in 2001, in his home town of Las Vegas, Agassi founded a tuition-free charter school for at-risk youth called the Andre Agassi Preparatory Academy. Since 2007 alone Agassi has donated over $3,000,000. 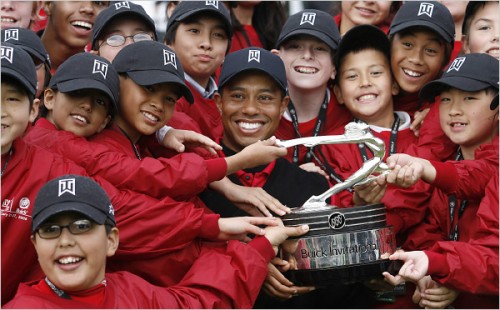 The last couple of years have been pretty rough (insert golf joke here) for Tiger Woods. His public image has become a little tarnished, to say the least. So you might assume that Tiger is on this list simply because he donated a truckload of cash as a pathetic public relations ploy. But I’m here to tell you, no matter what you think of his sexual misdeeds, the guys is legit when it comes to charity. He donated $9.5 million in 2007 and another $1.35 million in 2008 to the Earl D. Woods Sr. Scholarship Fund and the Tiger Woods Learning Center, both of which help underserved kids get to college. 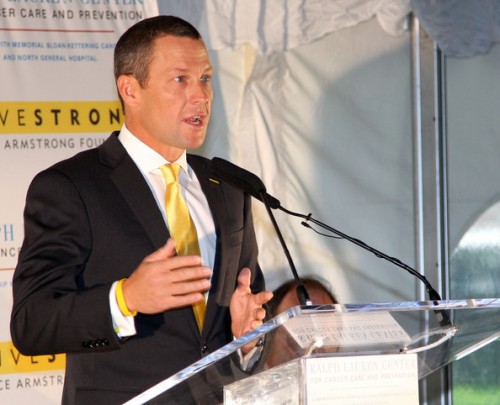 Lance Armstrong has done so many amazing things. He beat testicular cancer. He won the Tour de France seven times in a row. He made Americans pay attention to the Tour de France. He got everyone and their uncle to wear goofy yellow bracelets. And, last but not least, amidst all these other things, he started one of the most successful charitable foundations in recent memory. In addition to giving speeches and needling other rich people to donate money for cancer research, Armstrong himself pledged to donate $5,000,000 over ten years back in 2008, putting his money where his mouth is. 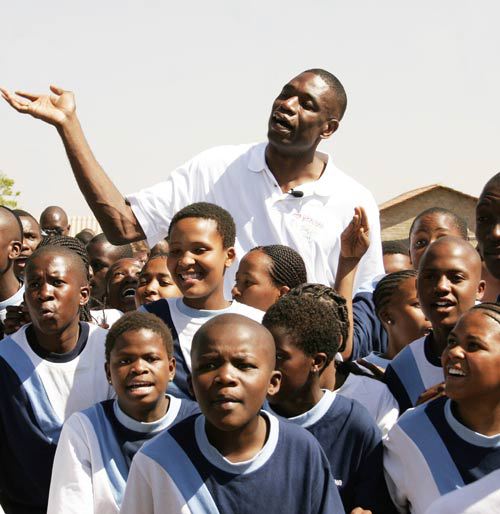 He used to be known mostly for his trademark “no, no, no” finger wag after blocking shots, but now former NBA Defensive Player of the Year Dikembe Mutombo is better known for his amazing dedication to charity. In 1997 he founded the Dikembe Mutombo Foundation to improve the lives of people in his native Democratic Republic of Congo. SInce 2001 he has donated at least $15 million dollars to build a hospital in his hometown of Kinshasa. That’s putting your enormous salary to good use. 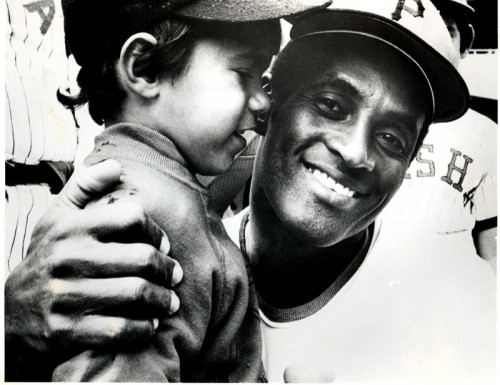 The top two names on this list hail from an age when professional athletes were not bazillionaires. So being “charitable” back then meant more than just giving money. It meant giving of yourself, and using your celebrity status to draw attention to the plight of others. Coming in at #2, therefore, is one of the greatest baseball players and one of the most important philanthropists of all time: the Pittsburgh Pirates’ Roberto Clemente. Clemente made $125,000 in 1970. Today, with inflation, that would be a little let than a million bucks. He wasn’t a brand in and of himself like the Lebrons and TOs we have today. But, in addition to being a kind of Latino Jackie Robinson, making Latin American players mainstream in Major League Baseball, Clemente worked tirelessly to bring money, food, and other desperately needed goods to poor people in his native Puerto Rico, as well as elsewhere in Latin America. And if he wasn’t delivering goods, he was holding baseball clinics for children. Roberto Clemente died at the age of 37. He was bringing food and supplies to help victims of a terrible earthquake in Nicaragua when his plane crashed. Though shocking and tragic, his death was fitting. Today, Major League Baseball’s humanitarian award is named the Roberto Clemente award. 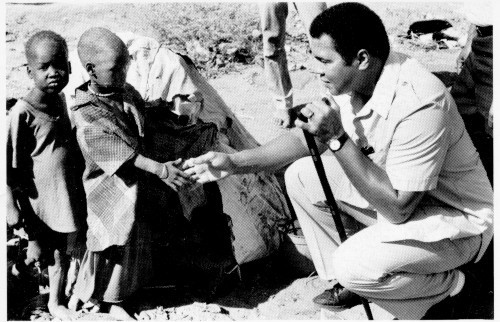 Muhammad Ali’s charitable legacy is not measured in dollar signs and decimals, but by the countless stories of his willingness to bring joy to others. As President Barack Obama put it, “We admire the man who has never stopped using his celebrity for good — the man who helped secure the release of 14 American hostages from Iraq in 1990; who journeyed to South Africa upon Nelson Mandela’s release from prison; who has traveled to Afghanistan to help struggling schools as a United Nations Messenger of Peace; and who routinely visits sick children and children with disabilities around the world, giving them the pleasure of his presence and the inspiration of his example.” Muhammad Ali is the first, the original charitable athlete. And he’s been at it for 50 years now.