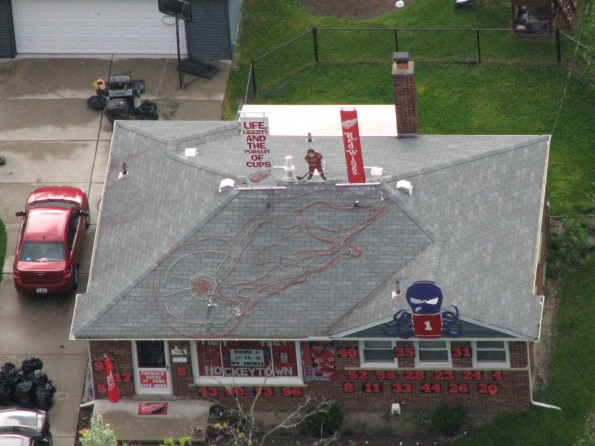 At Michael Tyler’s home in Livonia, Michigan, NHL playoff time is a lot like Christmas time.  With the hometown Detroit Red Wings making an appearance in each of the past 20 post-seasons, April has always been a time to celebrate for this die-hard fan.  And much like Christians celebrate Christmas by decorating their houses with lights, snowmen, and other decorations, Red Wings fans like Michael celebrate the Playoffs by decorating their house with octopi, Stanley Cups, and the numbers of each of the players on the current Red Wings team.

This year is no different for Michael’s home, which is located on Farmington Road, north of West Chicago.  According to him, the planning and set-up usually begins about a month prior to the start of the playoffs, but with the Wings usually finding themselves secured in a playoff spot by then, he rarely has to worry about doing all that work for nothing.

And what do the people in the neighborhood think?  They love it, of course!

“A lot of people honk. A lot of people drive by and stop and take pictures. We’ve got people that will even come up and talk to us… just full of excitement of the playoff time. It’s a great, great feeling,” Tyler said.

One week ago it appeared as though Michael would have to begin taking down the decorations earlier than he had hoped, as the Wings found themselves trailing the San Jose Sharks in their second-round best-of-seven series 3-0, but the Wings have since stormed back to tie the series at 3-3.  Game 7 is set for tonight in San Jose.  It will be interesting to see if Michael will get to keep his decorations up for at least one more round. 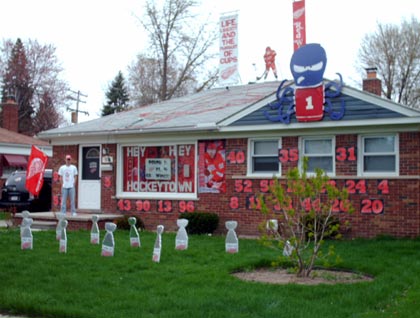