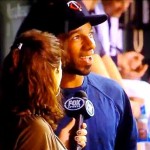 Being a member of the Minnesota Twins throughout his five-year Major League Baseball career, second baseman Alexi Casilla hasn’t had to deal with many rain delays, as the Twins have spent most of those seasons playing within the weather-friendly (or at least we thought) confines of the Metrodome.

And as far as hail storm delays go, this 26-year-old from the Dominican didn’t even know what hail was until last night, when the game between the Twins and the Tigers at Target Field had to be delayed for over an hour as giant balls of hail fell from the Minnesota sky.

So how did Casilla describe the “big ice coming out of the sky”?  One word.  Unbelievable.