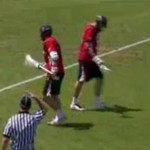 Our second great lacrosse highlight may be better than out first!

While the “Hail Mary” lacrosse goal from a high school game last week was awfully impressive, it probably had more to do with luck than skill.  As for the hidden ball trick performed by the Maryland Terrapins during an NCAA Tournament lacrosse game against the University of North Carolina Tarheels, it had everything to do with skill and deceptive game-planning.

The seventh-ranked Terps led 8-5 with just over one minute remaining in the third quarter, when Brian Farrell and Grant Catalino crossed paths just outside the offensive zone.  Farrell, who had the ball, appeared to flip it to Catalino.  However, he would end up snagging it just before it landed in Catalino’s stick.  With all the Tarheel players now focused on Catalino, Farrell was able to sling a pass over to teammate Drew Snider, who buried the ball past the unsuspecting North Carolina goaltender.

That play likely demoralized the Tarheels, as the Terps would eventually run away with a 13-6 victory over their ACC rivals.  Here is another look at lacrosse’s version of the hidden ball trick, along with an analysis from coach John Tillman.