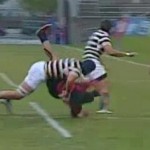 One of college’s lesser known National Championship Tournaments has been taking place over the past few weeks, as men’s rugby teams from across the country compete until only one team is left standing.  Going into last weekend four teams remained in the tournament, including the California Golden Bears and the Utah Utes.  These two teams squared off in Glendale, Colorado on Saturday in a semi-final match that saw the Bears cruise to an easy 62-14 victory.

As for the Utes, their strong season (7-2) came to a crushing end in more than one way.  In addition to being battered on the scoreboard during their 48-point defeat, they were also steamrolled on the field, as was evident from this hit by the Bears’ 8-man Danny Barrett on the Utes’ scrumhalf.

And for those of you who think that anything goes in the game of rugby, think again.  Barrett was assessed a yellow card and sent to the sin bin for ten minutes for what the officials deemed to be a late hit.  Check it out below.