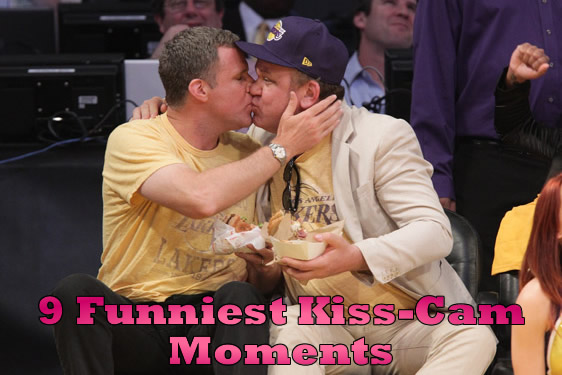 The Kiss-Cam might be the single best innovation of the live sports experience in the past 25 years…or at least since the dot races. No other spectacle provides such opportunity for humiliation, lust, comedy, and humiliation again. I’m sure when that camera focuses on you and yours, the adrenaline starts going and that little voice in your head says, coolly but firmly, “Life comes down to a series of moments. This is one of them.”

Here are a few of those moments that didn’t go quite as planned. Sadly, there aren’t as many abject humiliations here, but there is an instance of a dorky guy dry humping his gal, and another of a man picking a beer over a woman.

Soooooooooo: Life comes down to a series of moments. These are some of them.

9. Will Ferrell and John C. Reilly

It should be of little surprise that these guys found their way into each other’s arms during a Laker game. They’ve been in too many films together to be just friends. You have to love the people you work with. Why do you think Scorcese works with DiCaprio so often?

The man operating this camera is going to hell. And I’m going to send him there. Seriously. There is nothing funny about what happens here. Which, in turn, makes it really, really funny. In my mind, the girls ended up kissing (at least kissing) for another 45 minutes or so.

I think this guy might be harboring a secret fetish for public displays of affection. Who gets this excited to kiss their wife or girlfriend? Or maybe it’s something more lewd. In order to make every Kiss-Cam encounter as awkward as possible, I like to think that every couple are brother and sister.

6. Aggie Gets Rejected, Then Gets A Pity Peck

This isn’t a Kiss-Cam per se, but it’s a camera at a sporting event trying to kiss a girl, so let’s not split hairs. I enjoy this immensely only because it’s an Aggie. She’s having none of it, then he gets visibly upset, but not angry. Like a toddler that has been denied a second candy bar in the checkout line. The kiss he finally does get is the most humiliating aspect of the whole affair.

If that dude was a Longhorn, we would be reaching climax with two girls by the end of the clip.

5. Kids Do the Darndest Things

Really don’t want to ruin this one. Suffice it to say that this young lady is not to be trifled with. I think she will grow up to be Uma Thurman in “Kill Bill.” I think she’s wearing a yellow leather motorcycle suit under her Osh Kosh B’Gosh.

I wish these guys all the best, but this thing feels a little flat. The guy proposes to her, and she responds as though he just asked her if she wants another beer. “Yeah. Sure. Sounds good.” Let this be a lesson: perhaps a little more pageantry isn’t such a bad thing.

Also, something about proposing to a girl while she’s wearing a hockey jersey just doesn’t sit well with me.

3. Victoria and Torrie Wilson in the WWE

This is probably the sexiest moment in the history of the WWE, so needless to say, they ruin it by padding the moment with a picture of a dog and tons of video of dudes conquering their homophobia to take broing out to the next level. All in all, a pretty quintessentially WWE experience.

They didn’t want Dwyane to get jealous. The Heat have had a very tricky dynamic since they acquired so much talent last year. Sexual tension has been running at an all-time high. If they were all to just get a hotel room at the Viceroy and sleep with each other, they would four-peat. Guaranteed. Phil Jackson would DEMAND it if he was calling the shots for the Heat.

If this wasn’t scripted, this guy is the luckiest dude in the world, as he has clearly been planning this moment for years. This is his Woodstock. And to be fair, he kind of kills it. The passion he shares with that cold, foamy beer is the type of passion most couples only dreamed of. Meanwhile, the GF looks as though she’s forced to watch someone key her car. Amazing. I think that guy and that beer are going to be very happy together.