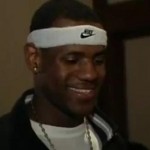 Times certainly have changed.  Only eight years ago we were watching a humble LeBron James take part in a simple interview prior to the 2003 NBA Draft, talking about the prospects of playing for his hometown Cleveland Cavaliers, and refusing to promise any championships.

Fast forward eight years later and we have “The Decision,” the Miami Heat pre-season parade, and LeBron’s promise of “not one, not two, not three, not four, not five, not six, not seven (championships).”

Keep this up LeBron and your prediction will be right.  It wont be one, two, or even ten championships for you and the Miami Heat.  It will be zero.