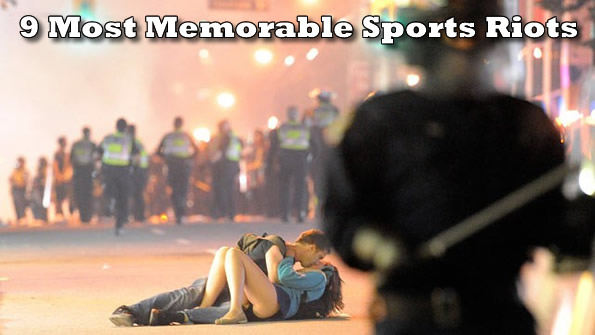 In light of the stupid Vancouver riots that took place earlier this week, we decided to investigate some of the most memorable riots in history, seeing how fans (and players) can react so violently and dangerously to both winning and losing. While none of these actions are forgivable, some were certainly foreseeable (see entry number one). So put on your riot gear and let’s have a look at some jubilant and angry fans breaking sh*t.

Unsurprisingly, this won’t be the only Detroit entry on the list. Euphoria quickly shifted to anarchy as Tigers fans celebrated their victory by burning trash (and cars). Police on horseback were powerless to do anything to quell the fervor. Even the police in squad cars were helpless, as more than one was flipped. It’s one thing to flip a regular car on the street. However, to flip a police car, you’re letting everyone know that the inmates are running the asylum. This outburst also may carry with it the dubious distinction of being the first “victory riot” in the States. So…yay?

While we’re on the subject of Detroit, let’s go with this iconic outburst in 2004. A fight broke out between the Indiana Pacers and hometown Detroit Pistons with less than a minute left in a November regular season game. While noted crazy person Ron Artest was laying on the scorer’s table for reasons unknown, a fan chucked a Diet Coke at him, causing him to run into the stands and punch…the wrong guy. Five players were charged with assault and sentenced to community service. Five fans were banned for life from the Palace after facing criminal charges.

This wasn’t the bloodiest riot (not even close), but it was one of the only times the invisible wall between player and fan was broken down, changing the course of interaction from that point forward.

Riddick Bowe’s entourage wanted to demonstrate to Andrew Golota that it is NOT ok to repeatedly punch your opponent in the testicles in a boxing match. After the match was called and Golota disqualified in the seventh round, Bowe’s entourage rushed into the ring, pummeling Golota with a two-way radio, and beat up Golota’s 72 year-old trainer. Classy.

They then turned their attention to the spectators and staff, injuring several before finally being forced out of the venue by police. Again, not the bloodiest riot, but among the most haunting with the image of a 72 year-old man on a stretcher, unable to be removed from the building while the participants inside the ring turn their attention to the crow.

Here’s one that DOES rank among the bloodiest of all time. During a 2007 match between Nueva Chicago and Tigre, the fans decided to demonstrate their support, as soccer fans often do, buy chucking rocks at each other and beating each other with pipes. (Where you find rocks in a stadium is beyond me. Perhaps it was “free rock night?”) Anyway, it was just your run-of-the-mill soccer rioting until a penalty in injury time led protesting fans to jump onto the field, effectively ending the game before the kick could be taken. 41 people were injured and one was killed in one of the bloodiest riots in sports history.

The benchmark for all American sports riots seems to be the regular riots that occur in downtown LA when the Lakers take the trophy. The first one of note happened in 2000, but the events of 2010 showed that nothing has really changed and no lessons have been learned as fans went wild even with an ENORMOUS riot police presence anticipating the anarchy. Once police started to hold their ground, they were met with full flying soda cans, which they responded to with tear gas and rubber bullets. Fun times.

10 people were injured and 50 were arrested.

Canadian fans, often known for their manners, know how to effin’ riot. Sure, they’ll get fired up about the occasional Guns n’ Roses concert, but nothing brings out their dark side like the Stanley Cup, for obvious reasons. And 1993 showed that fans can be just as dangerous in victory as in defeat. After the Canadiens won the Cup, fans started looting and assaulting on St. Catherine Street, destroying not one, not two, but 47 police cars (!). 168 people were injured and damage was in the millions. Just imagine if they had won.

The road to hell is paved with good intentions.

In what was supposed to be a fun event, White Sox fans turned out in droves to donate their disco albums to be blown up on the field. By some accounts, there were 90,000 people in and around the stadium which held only 52,000. Authorities had expected around 12,000, so they were ill-equipped to handle what was about to go down.

After the first game of a double=header, the first demolition of the albums left a hole in the field and a fire burning. Unsurprisingly, this riled up the fans enough to take to the field. Police in riot gear eventually quelled the crowd, but not before the second game was forfeited and six were injured and 39 arrested. 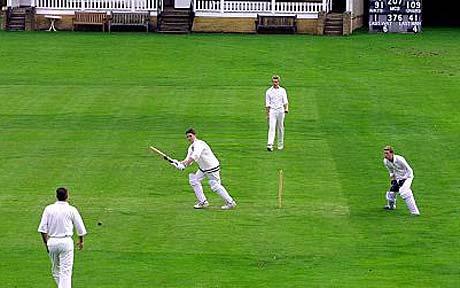 It should be no surprise that Aussies make this list by raising hell, but the fact that they did it way back in 1879 might be. After “not loving” a call made in favor of the visiting English team against the home New South Wales team, the fans rushed the pitch to share with the official (also a Brit) their disapproval. And then some. 2,000 fans took to assaulting the official mercilessly, some say at the behest of angry bettors, and some say due to pent-up frustrations from the effects of colonization. Newspapers declared the events a source of national humiliation and the English team cancelled the rest of their games in Australia, understandably.

Let’s end this list with a big “duh.” Thinking that discounted beer would get fans out to the Cleveland Municipal Stadium, Indians officials offered a ten-cent beer promotion where fans got 8 oz. cups of beer for a dime. Well, wouldn’t you know it? Some of them got really, really drunk. Fans took to the field with knives, chains, and their firsts, pursuing Texas manager Billy Martin after it appeared he had gone after an aggressive fan. As the fans closed in on the opposing Texas Rangers, the Cleveland manager, Ken Aspromonte, ordered his players to grab bats and protect the visiting team. A nice show of solidarity in a very ugly situation.

With all the zombie films and TV shows now, it’s hard not to imagine this playing out like a “Day of the Dead” film in which the Rangers are holed up in their locker room while drunk, brainless fans try to move in.

At least they didn’t do it in conjunction with souvenir bat night.