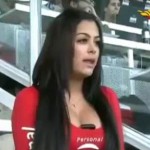 While one busty blonde babe was busy flaunting her breasts for the fans and their cameras during Paraguay’s Group B match against Brazil at the Copa America, her predecessor, Larissa Riquelme, was nervously watching her country’s squad as they attempted to hold onto a 2-1 lead late in the match.  Unfortunately for Larissa, she would have to settle for the 2-2 draw, as Fred’s goal in the 89th minute earned Brazil a crucial point and kept their hopes of advancing alive.

And for those of you who were wondering, Larissa is still using the same cell phone holder, however, it appears as though she has traded in her Nokia for a Blackberry.  I guess you can fit any type of phone between those beautiful breasts of hers.