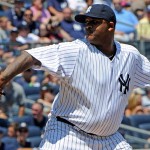 Every team in Major League Baseball wants to head into the All-Star break on a winning note.  The Yankees were looking to just that against their division rivals, the Tampa Bay Rays.  It would not be an easy task, as the Rays sent All-Star pitchers James Shields to the mound, but luckily for the Yankees, they had an All-Star pitcher of their own starting this game.

Shields was great for the Rays, allowing only four hits and no earned runs over eight innings.  Unfortunately, he did allow one unearned run, as Robinson Cano reached home plate thanks to a single and two throwing errors.  And that one run was all the Yankees needed, as C.C. Sabathia earned the complete-game shutout, allowing only four hits against while striking out nine during the 1-0 victory.

With the win, the Yankees enter the All-Star break only one game back of the Boston Red Sox for first in the AL East.  As for Sabathia, the win was his Major League leading 13th of the season and it earned him the “Stat Line of the Night” for Sunday, July 10, 2011.