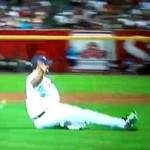 Despite risking injury, Jose Bautista should be applauded for his diving catch in the right field corner during last night’s Mid-Summer Classic.  Fans pay big bucks to see the best players in baseball give it their all at the All-Star Game, so the players should feel as though they owe it to them to give their best effort.

However, what the players don’t owe the fans is unnecessary sprinting and sliding towards the mound from pitchers during relief appearances, but that didn’t seem to stop Heath Bell from doing it.

Pitchers barely ever have to run, so just the sprint from the bullpen towards the mound could have resulted in a pulled groin or strained hamstring for the Padres’ reliever.  As for the slide, there is always the fear of something going wrong when a 6’3″, 260 pound man goes barreling into the ground like that.

Luckily, Bell avoided injury and did his part by recording the final out of the eighth inning for the National League.  Here is another look at his dramatic entrance.