9 Historic Sports Sites That Should Never Be Torn Down 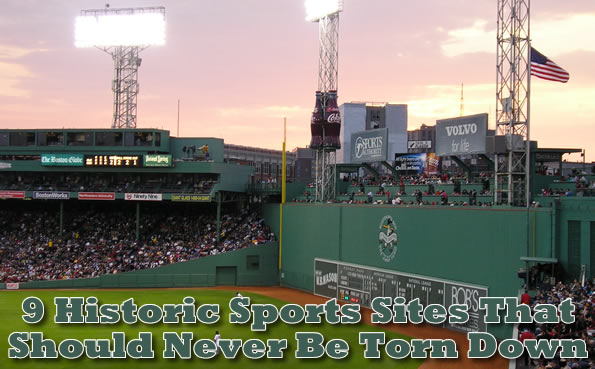 Yesterday, we did a list of 9 old stadiums that just have to go. Today, we have for you, the companion to that list: 9 historic sports sites that should never be torn down. These are those special atmospheric places where sports history was made, places which have come to embody the essence of the sports played within their walls. Some are universally known; others are more obscure. Some are venues for professional sports; others host amateur sports. But everyone of them is totally awesome and worthy of some recognition. 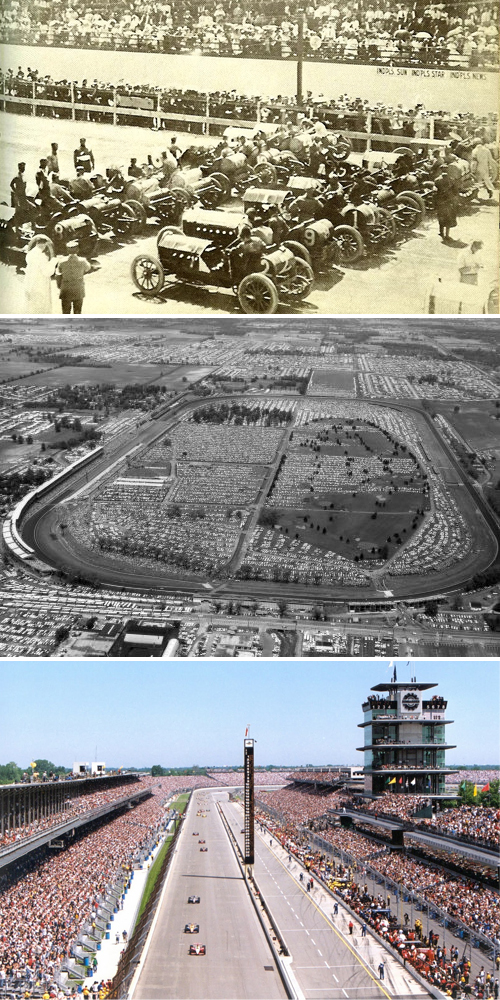 Built in 1909, the Indianapolis Motor Speedway was the brainchild of businessman Carl G. Fisher. It was the first proper auto racing tack built in North America, and thus was integral to the development of both consumer automobiles (because, until then, car companies didn’t have a suitable place for test runs) and the sport of auto racing. Of course, the IMS is also home to the most famous automobile race in the world, the Indianapolis 500. Today, with permanent seating for 257,000 spectators, plus infield seating that raises the capacity to about 400,000, the Indianapolis Motor Speedway is the highest-capacity sporting facility the world has ever seen. 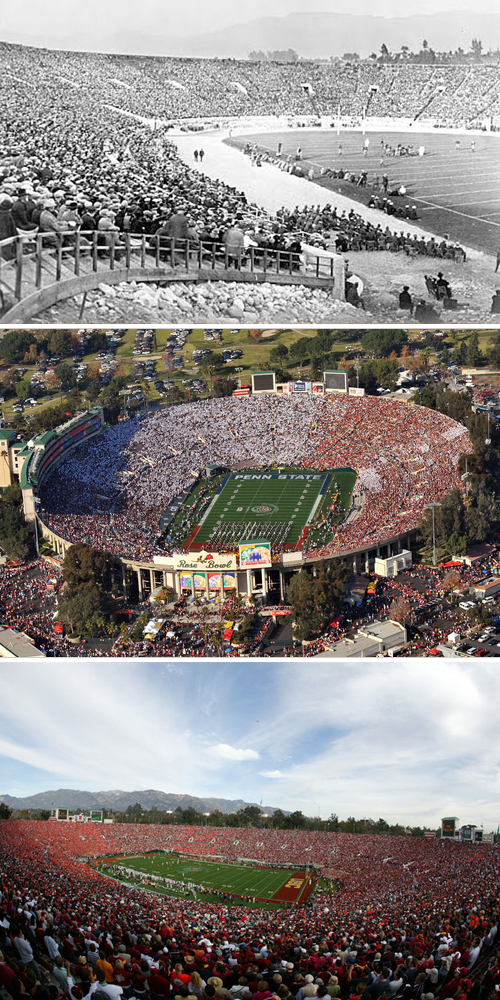 This beautifully simple shrine to American sport was completed in 1922, and the first Rose Bowl game was played there on January 1, 1923. Since then, the stadium has hosted a variety of concerts, numerous college football national championship games, five Super Bowls, two Summer Olympics (1932 and 1984), and both the Men’s and Women’s FIFA World Cup Finals (1994 and 1999). The venue’s all-time attendance record was set on January 1, 1973, when 106,860 people watched USC beat Ohio State 42-17. America has an official “National Cathedral”; if it had an official “National Stadium,” it would probably be the Rose Bowl. 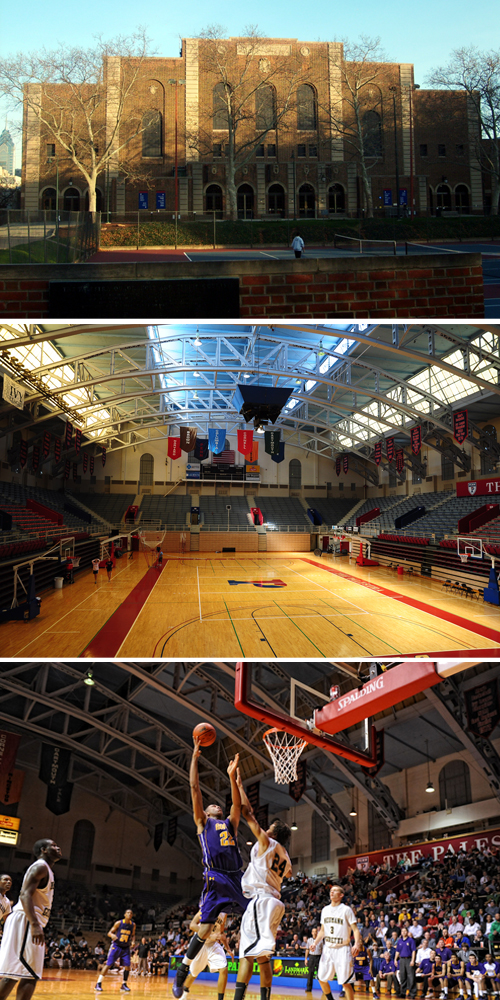 A lot of people would probably want to include Duke University’s Cameron Indoor Stadium on this list. But the next two sites paved the way for places like Cameron. The University of Pennsylvania’s Palestra, for example, is called “The Cathedral of Basketball.” It opened on January 1, 1927, and at the time was one of the largest arenas in the world, seating about 10,000. Over the years, the Palestra became famous for its stately architecture and wonderful atmosphere. And of course it’s also seen some excellent ball. Every year, it hosts games between the Philadelphia Big 5—Penn, La Salle, Saint Joseph’s, Temple, and Villanova. In 2007, ESPN Classic aired a one-hour documentary called The Palestra: Cathedral of Basketball. 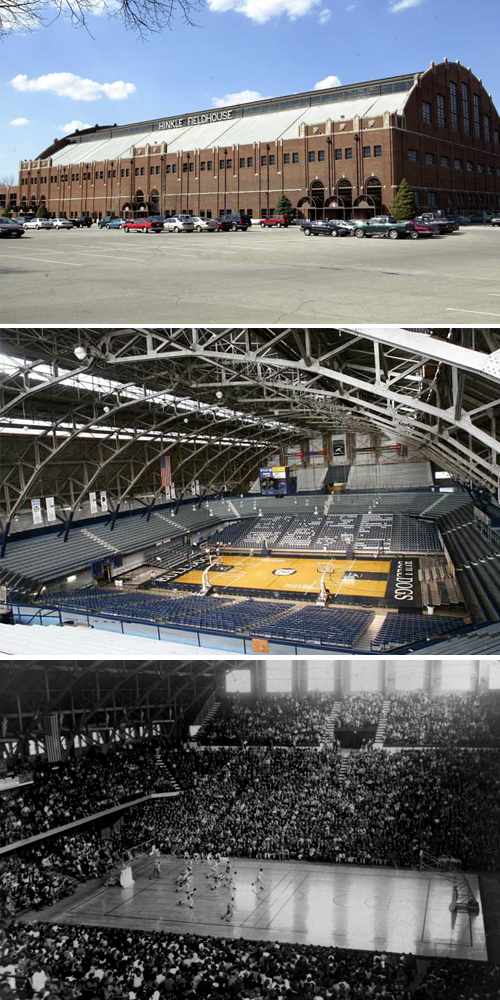 Springfield, MA, may be the “birthplace of basketball,” but the sport’s mythical, spiritual home is Indiana. This is due in large part to the legendary events that took place in Butler University’s 10,000-seat Hinkle Fieldhouse (opened 1928). I am talking of course about the Cinderella victory of tiny Milan High School in the 1954 Indiana state basketball championships. You’re probably familiar with the story, since it was immortalized in perhaps the greatest sports film of all time, Hoosiers. 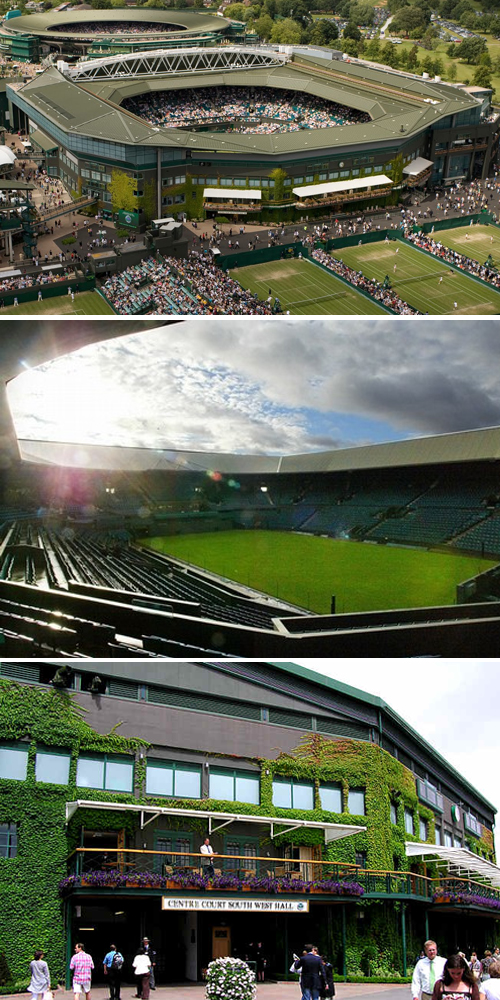 Wimbledon is the world’s oldest and most prestigious tennis tournament, and it has a venue befitting its stature. The 15,000 seat Wimbledon Centre Court was originally built in 1922, and despite undergoing several renovations over the years—especially after Nazis bombed the hell out of it during WWII—it has always managed to maintain it’s stately atmosphere and almost theater-like feel. That’s why Centre Court is and always has been the sport’s greatest stage, and a place of pilgrimage for fans around the world. 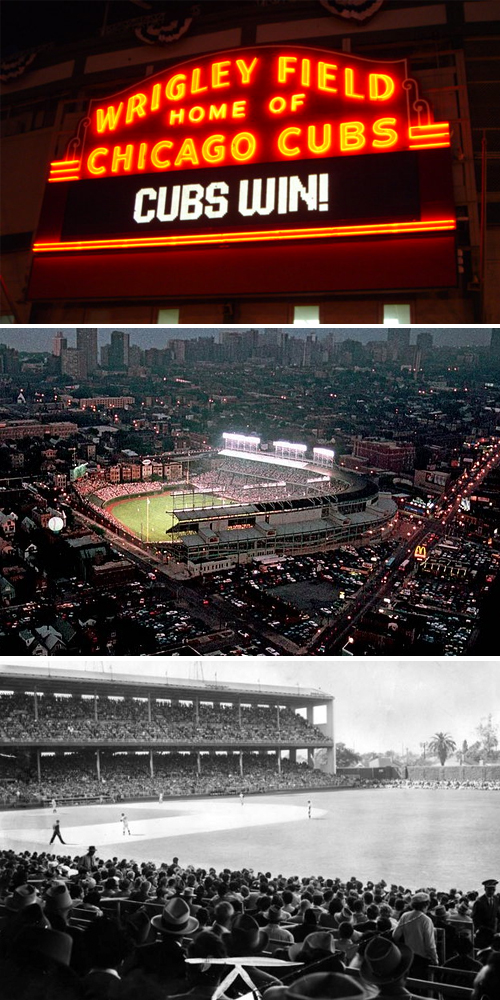 Wrigley Field opened in 1914 and became the home of the Chicago Cubs in 1916. In its heyday, people would have laughed at you if you called it one of baseball’s most beautiful ballparks. Babe Ruth called it “a dump” when he and the Yankees first played there during the 1932 World Series. However, after all those ugly cookie-cutter stadiums began popping up in the 1960s and 70s, when Wrigley was one of the only “old-fashioned” stadiums left, people started warming up to the rickety old place. All of a sudden the dangerous ivy-covered brick wall in the outfield, the cave-like concourses, the obstructed views, and the urinal troughs in the men’s rooms all became “charming.” It’s a paradox, really. Today, Wrigley Field is a terrible place to play and watch baseball by any measurable standard—which is precisely why it is an absolutely fantastic place to play and watch baseball. 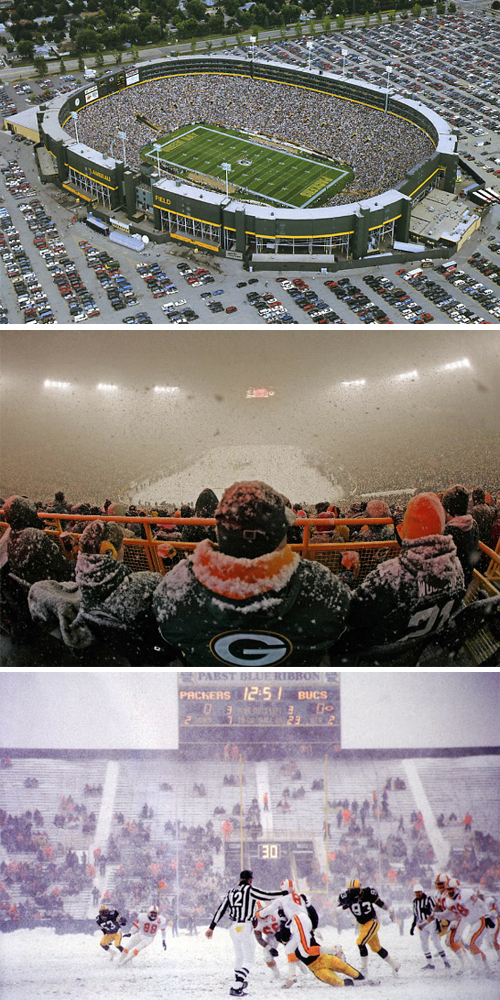 No other professional sports franchise in North America has a greater connection to its community than the Green Bay Packers. That’s because the team is owned by a corporation—Green Bay Packers, Inc.—in which every single citizen of Green Bay, WI, is a shareholder. And Lambeau Field is their boardroom. Built in 1957 and named after the team’s founder, Curly Lambeau, the stadium seats 73,128 people, which is about 75% of the population of the entire city. You know the stadium you are walking into is a special place when its street (Lombardi Avenue) and the NFL’s championship trophy (The Lombardi Trophy) are named after the home team’s most legendary figure (Vince Lombardi). 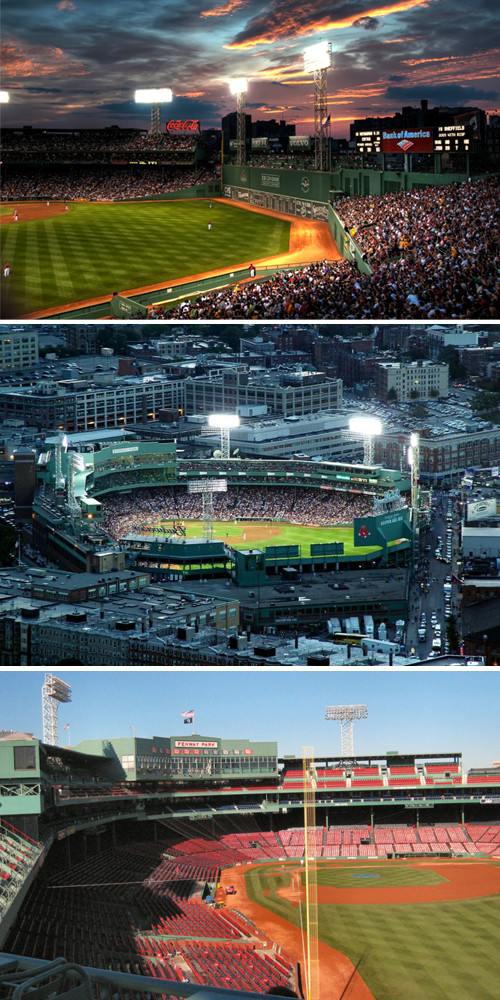 Fenway is not only the oldest ball park in Major League Baseball; it is the oldest venue currently used by any professional sports team in North America. It’s been home to the Boston Red Sox since April 20, 1912. Like other classic ball parks of the period, Fenway’s odd asymmetrical dimensions were determined by the asymmetrical city block on which the stadium built. They didn’t build the world famous “green monster” for kicks; they had to have a huge wall out in left field if the ball park was to play fair. Today, as with Chicago’s Wrigley Field, the charm of Fenway park lies in its conspicuous un-modernity. 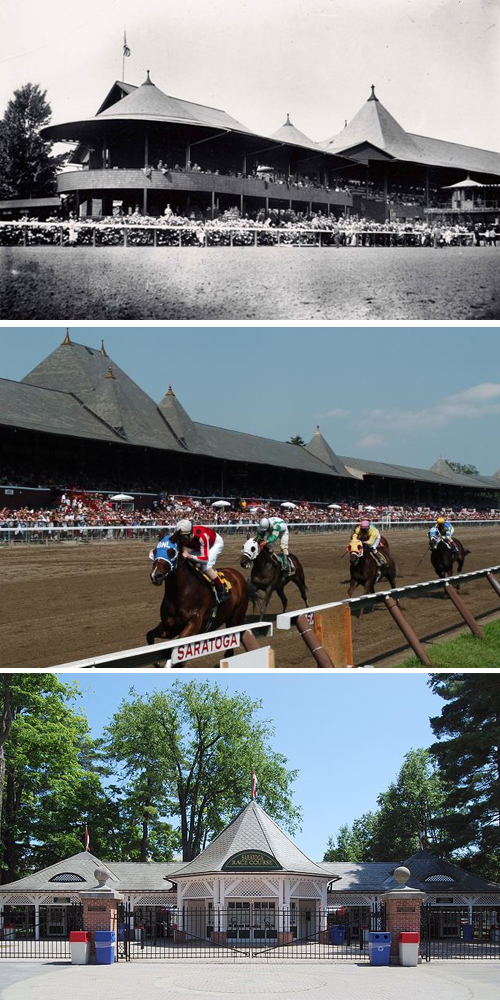 Churchill Downs may get all the attention because it is home to horse racing’s most famous event, the Kentucky Derby; however, the grandstands at Saratoga Race Course in Saratoga Springs, NY, are more beautiful. More importantly, the place opened on August 3, 1863. That makes it the oldest organized sporting venue of any kind in the United States. And although it does not host any of the Triple Crown races, Saratoga is home to 16 other top grade races throughout the year. So if you’re into sports history, put this place at the top of your list of places to visit.