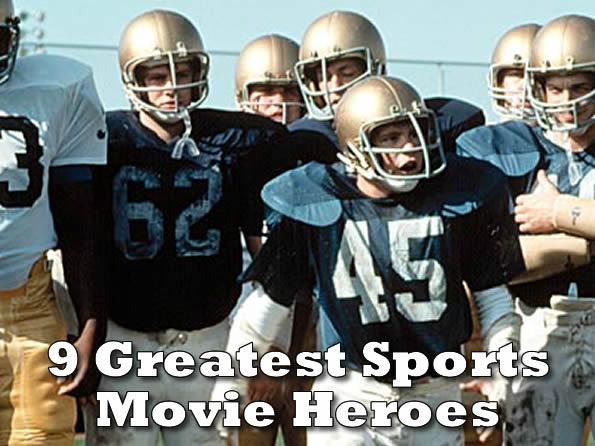 Last week we brought you a list of the most sinister sports movie villains. So obviously, we had to come back this week and balance things out with a list of the greatest sports movie heroes. As you would expect, it’s a list of nobodies, underdogs, long-shots, and has-beens who fought through adversity and came out on top. Are all of these stories—even the “true” ones—completely true to life? No, not exactly. Instead, these movie heroes are more like Monet paintings: they aren’t photorealistic depictions, buy they capture the essence of the subject. And that’s what you want in a movie, anyway. So without further ado, here are the 9 greatest sports movie heroes of all time.

Sure, Charleston Chiefs player-coach Reggie Dunlop (played by the legendary Paul Newman) may have been a washed up liar and manipulator. Among other things, in order to motivate his players, he starts a false rumor that the Chiefs are going to be relocated to Florida. But his lies and manipulations help transform the Charleston Chiefs from perennial minor league hockey losers into bonafide minor league hockey champions—with a championship parade and everything! Of course, in leading his team to (minor league) glory, Reggie also performs an essential service that so many sports movie heroes provide: he gives the lovable losers on his team something more to look forward to in life than a steady job at the auto plant. Ditto for the Charleston Chiefs fans. 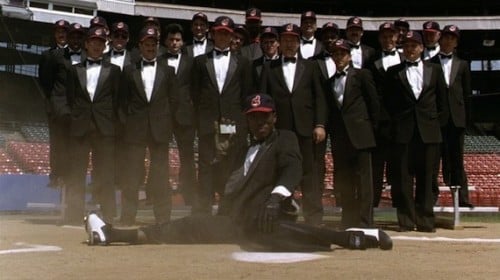 Major League may not have been a critic’s favorite when it came out in 1989, but that hasn’t stopped the film from becoming a fan favorite. Every time someone comes out with a new list of “Best Sports Films,” Major League inches closer and closer to the top. And this is no doubt due to the lovability of the film’s heroic protagonist: the entire Cleveland Indians baseball team. Like the film itself, nobody really expected all that much of them, but they believed in themselves and achieved the impossible. It’s the wildest dream of every long-suffering sports fan. And if you think the whole thing is silly, don’t tell that to fans of the 2011 Pittsburg Pirates. Every single one of them is hoping their team will become the real life fictional Cleveland Indians of Major League.

Now, I’m sure some of you might be thinking, “uh, if anyone from The Karate Kid is one of the greatest sports movie heroes of all time, wouldn’t it be the karate kid?” To that I say, let’s take a look at the facts. When the movie begins, poor Daniel is utterly lost and despondent. He’s an east coast kid in southern California—a veritable fish out of water—being mercilessly targeted by a remarkably well-organized and single-minded gang of black-belt bullies. The kid just has no idea what to do. Then Daniel meets Mr. Miyagi (played by the late great Pat Morita), who takes him under his wing and teaches him about courage, honor, friendship, and self-respect. Also, he teaches him superior Okinawan karate so he can kick the bullies’ asses. In short, there could be no Karate Kid without Mr. Miyagi. Therefore, he is the film’s greatest hero. 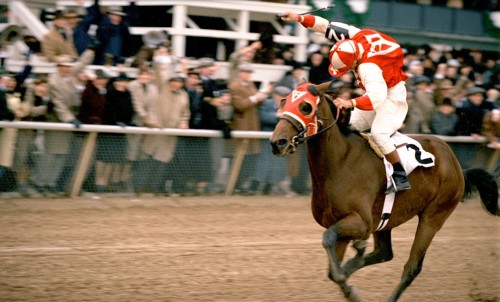 During the Great Depression, the world desperately needed heroes to distract everyone from their plight and remind them that there is always hope. It just so happened that one of the great heroes from that era was a horse named Seabiscuit. In the 2003 film of the same name, we see how this small horse—from whom nothing great was expected—nevertheless overcomes various obstacles and injuries to become one of the greatest racing champions of all time. Sure, maybe in the end Seabiscuit was just a horse. But in the movie and in real life, this horse embodied courage and perseverance, giving hope to down-on-their-luck human beings all over the world. 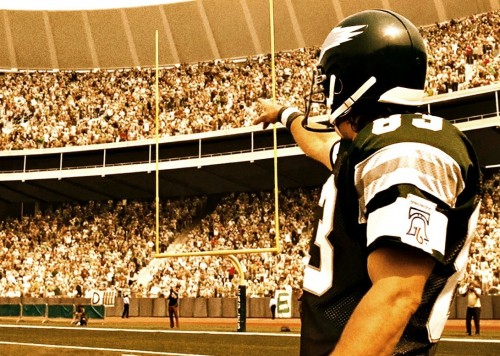 Vince Papale (played by Mark Wahlberg) is a 30-year-old bartender in a blue-collar Philadelphia neighborhood whose residents are fighting to stay afloat through touch economic times. When coach Dick Vermeil of the Philadelphia Eagles (played by Greg Kinnear) announces that the Eagles will hold open tryouts for the football team, Papale decides to give it a shot after some encouragement from his best friend. Of course he miraculously makes the team, and in doing so inspires not only his struggling neighbors, friends, and family, but the entire city of philadelphia. It’s a fantastic feel-good story, and one that just happens to be (mostly) true. Also, it’s a pretty great football flick. 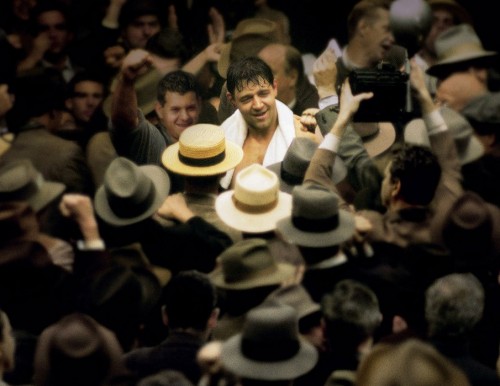 You would expect a movie called Cinderella Man to have a pretty awesome hero, wouldn’t you? Well, James Braddock (played by Russell Crowe) certainly doesn’t disappoint. He’s a washed up former boxer living in near-poverty who just wants to live honestly and provide for his family. Through grit and determination, the Great Depression-era pugilist makes a remarkable comeback and eventually becomes the most unlikely boxing champ in the history of the sport—not to mention an allegorical figure for the entire nation as it struggles to make an improbably comeback of its own.

Okay, now this list of great sports movie hero’s is moving into obvious territory. So, coming in at #3 is lovable little Daniel “Rudy” Ruettiger (played by Sean Astin) from 1993’s Rudy. Of course, you all know the story: five-feet nothin’, hundred and nothin’, Rudy nevertheless wants nothing more than to play football for the Notre Dame Fighting Irish. And though the odds of him doing so are astronomical, through hard work and heroic perseverance, Rudy eventually makes the team. There is probably no better film for a young athlete to watch before trying out for a team, and for a young athlete who has actually made the team there is certainly no better hero to emulate.

Rocky (played by the inimitable Sylvester Stallone) gets a prominent spot on this list of great sports heroes because he is the embodiment of a revised, modern version of American Dream—a hard-working everyman whose dedication and integrity may not yield worldly glory, but do earn happiness and self-satisfaction. Sure, technically The Italian Stallion loses the big bout against Apollo Creed. But as his famous call for Adrian at the end of the film indicates, Rocky realizes he is a winner at the far more important game of life. Awwwe.

“Do you believe in Miracles? YES!”

Those are the words everyone has come to associate with the 1980 U.S. Men’s National Hockey Team, which pulled off one of the greatest upsets in the history of organized sport when they beat the U.S.S.R. in the 1980 Winter Olympics. The story is poignantly told in the 2004 film Miracle, which explains how this single victory by an amateur hockey team picked a weary nation up off the ground and dusted it off. What’s more heroic than that?