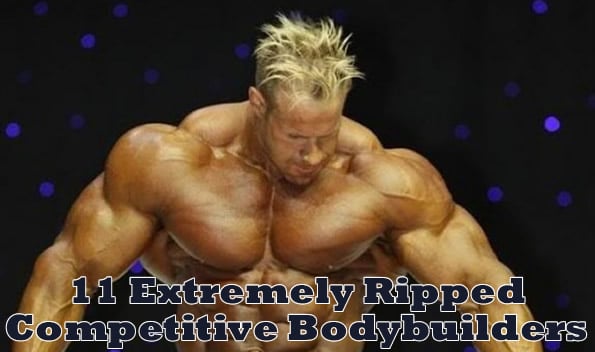 UPDATE: You’ve had three years to get off the couch and get that soft, doughy body into shape. Have you finally done it? No?? What’s wrong with you!? Maybe you need a little bit more motivation, so we’re adding a couple of bonus extremely ripped competitive bodybuilders that will haunt your nightmares, shouting at you to get off your ass and pump some more iron. Or any iron at all, really. You’re never going to make it as a competitive bodybuilder if there’s no iron getting pumped, will be their point.

Bust out the speedos and body grease, folks. It’s time to get pumped about bodybuilding, because the 2011 Mr. Olympia competition is coming up in about a month. Mr. Olympia, of course, is the premier event in the world of pro bodybuilding—the event that made 7-time champion Arnold Schwarzenegger a household name back in the 1970s. So there is no better time get acquainted with the stars of the sport. To that end, here’s a list of 11 insanely ripped dudes from the world of pro bodybuilding who will be in contention next month for the Mr. Olympia title. Read on, friends, and feel very, very weak.

I’m going to call this bonus entry “No. 40,” as per the little number tag underneath his massive abdominal muscles. He might be a world-famous bodybuilder for all I know, but his name, his hopes, and his dreams aren’t really in my sphere of knowledge. Well, OK, I could take a guess as to his dreams: They probably have to do with getting as ripped as possible.

“Babyman” might seem like an odd nickname for a competitive bodybuilder, but Bubba Shelton earned that moniker the hard way by being pretty damn close to an actual baby. He was five when the above video was made, when would make him about seven or eight years old now, and even more likely to kick your ass. 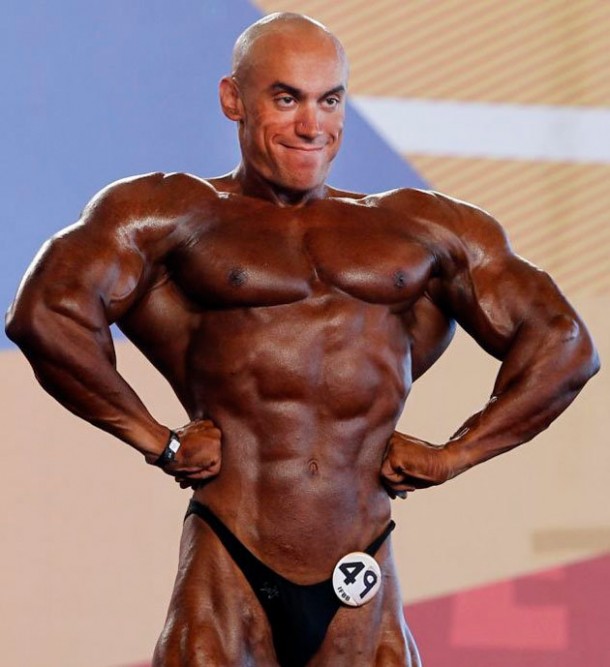 I don’t know this guy’s name or his stats, I just know that he’s a ripped competitive bodybuilder, he had a tanning mishap and he looks hilarious, so I’m putting him on this list. His purpose in this context is to remind you to always tan evenly, lest you end up looking like a bad Photoshop gag come to horrifying life. 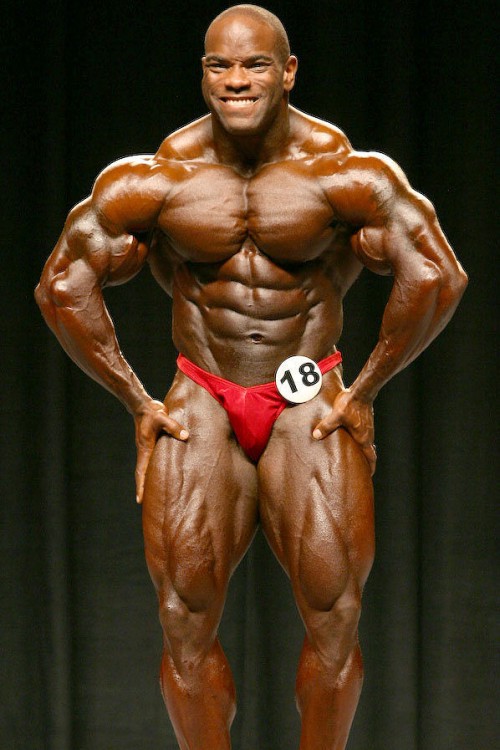 Johnnie Otis Jackson became an IFBB (International Federation of BodyBuilders) professional bodybuilder back in 2002, and today the 40-year-old New Jersey native is still going strong. He placed 7th in the 2011 Arnold Classic bodybuilding competition, which is the second most important competition after Mr. Olympia. 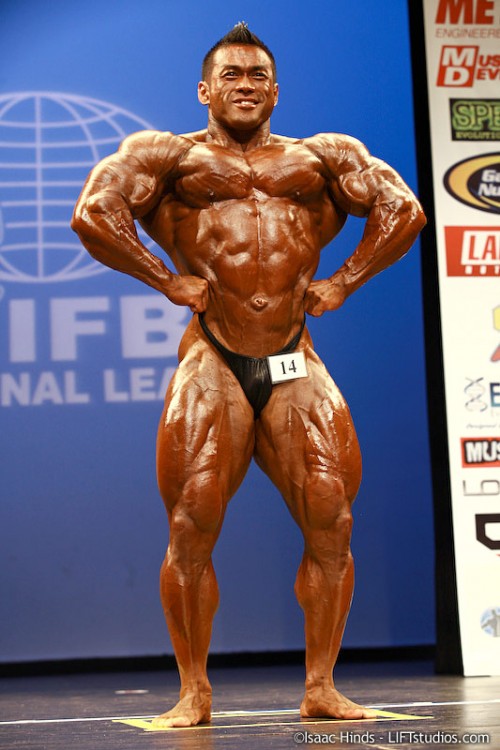 This 38-year-old IFBB pro made history in 2007 when he became the first ever Japanese competitor to qualify for and compete in Mr. Olympia and the Arnold Classic. From there Yamagishi continued to improve, cracking the top 10 at the 2009 Mr. Olympia and finishing 2nd in a couple other pro events that year. 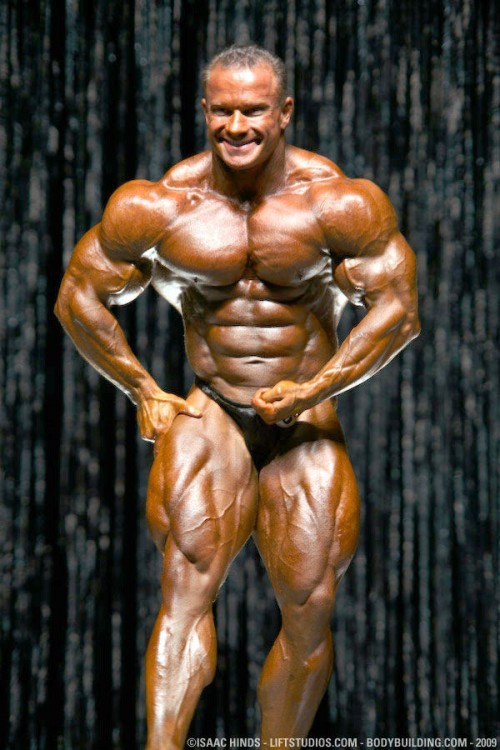 Ronny Rockel was just a 143-pound 17-year-old living in East Germany when the Berlin Wall came down in 1989. Shortly thereafter, Rockel saw the Schwarzenegger film Conan the Barbarian and decided he wanted to look like that. Today the 39-year-old is an accomplished IFBB pro, with one of the all-time great pro athlete names. He’s competed regularly in the big championships for the last decade, finishing as high as 6th in Mr. Olympia, 6th in the Arnold Classic, and 2nd in this year’s New York Pro.

Height: 5’6”
Competition Weight: 235 lb
Off-Season Weight: 250 lb
Miscellaneous Stat: had to build his first weight set because there weren’t any gyms in East Germany in 1989 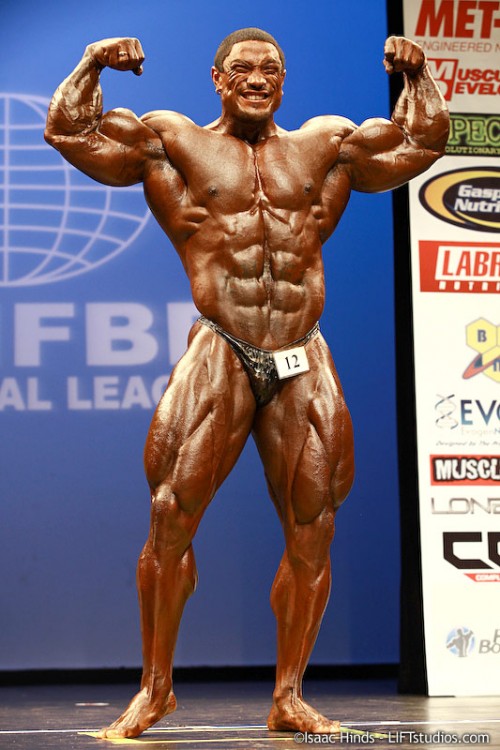 Roelly Winklaar, a 34-year-old Dutch Antilles native, is still relatively new on the pro bodybuilding scene, but he’s already made quite a splash. He placed 7th in his first IFBB Arnold Classic back in 2010, then went on to win his first IFBB New York Pro Championships later that year. Definitely keep an eye on this guy. 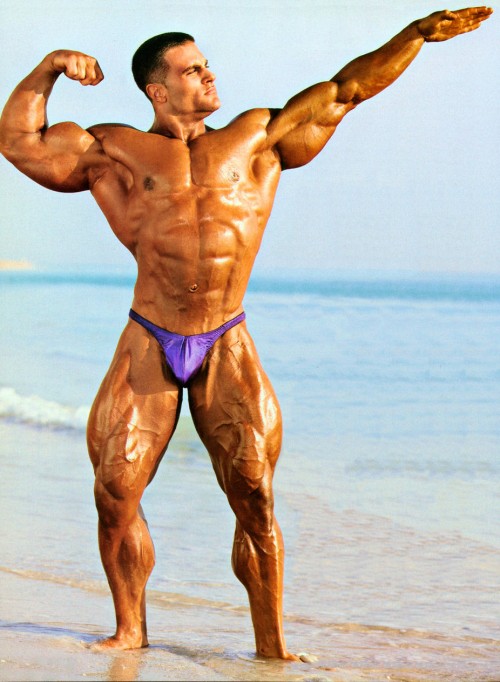 At 29-year-old and 5’11”, Evan Centopani is younger and taller than most of the established bodybuilding stars on this list. He won the New York Pro back in 2009 and finished 4th in this year’s Arnold Classic. With that kind of success at a young age, it looks like he’ll be a force to reckon with over the next 10 years or so.

Height: 5’11”
Competition Weight: 240 lb
Off-Season Weight: 270 lb
Miscellaneous Stat: he was “the fat kid” until he got hooked on pumping iron after his first year of high school 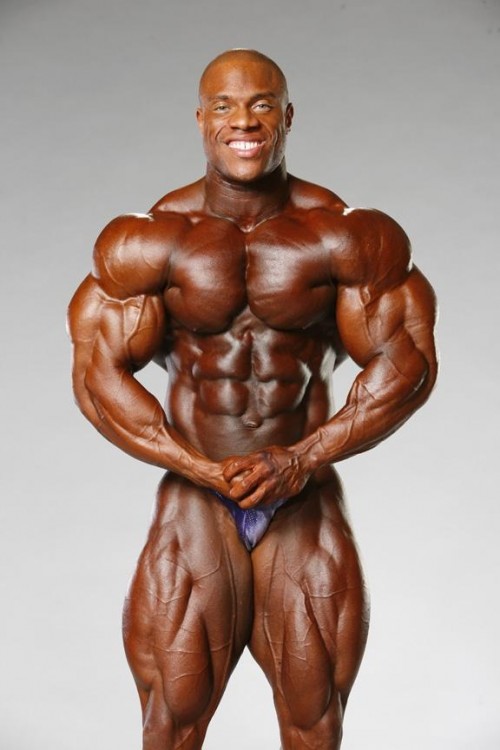 Phil Heath is just hitting his prime at thirty-one years of age, but that’s not to say he hasn’t already tasted success. He won the New York Pro on his first try in 2006. Since then, he’s finished 2nd in the Arnold Classic twice and 2nd in Mr. Olympia once, just last year. If his results were just a little more consistent, he’d probably be higher up on this list. Still, he’s always a threat at any competition. 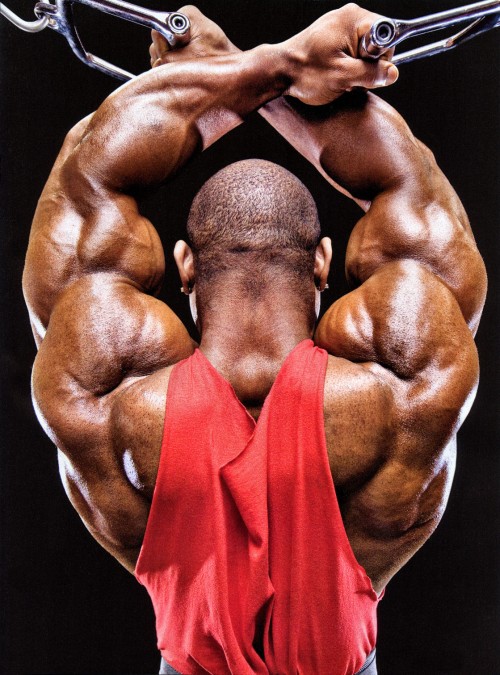 Dexter “The Blade” Jackson has been around for a pretty long time. He has been a competitive bodybuilder since 1992, and he made his pro debut back 1999. His greatest success, however, has only come more recently. In 2008 the then 38-year-old became only the second man to win both the Arnold Classic and Mr. Olympia in the same year. 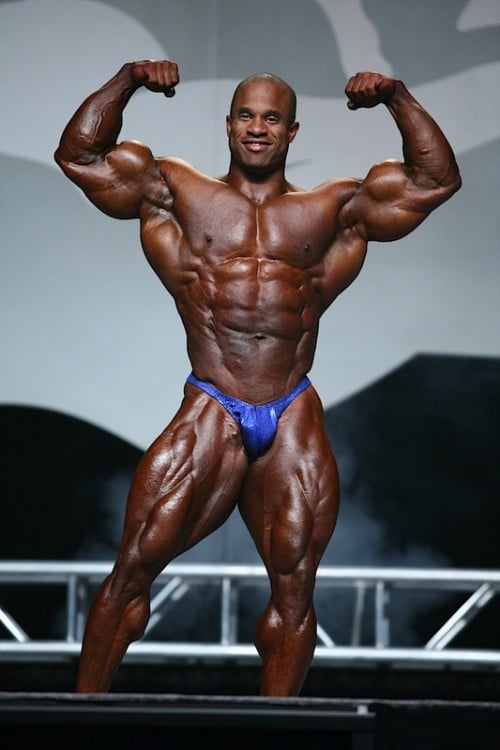 No, in case you couldn’t tell, this is not that Victor Martinez (the guy who plays first base and catcher for the Detroit tigers). This is the Victor Martinez who became only the second ever IFBB pro bodybuilder from the Dominican Republic, then went on to have a stupendous career that includes a win at the Arnold Classic (2007) and 2 top-three finishes at Mr. Olympia. 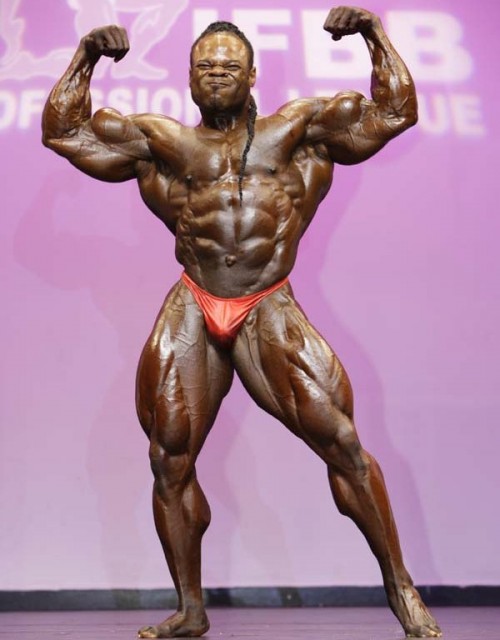 It’s hard to know what to expect from 36-year-old Brooklyn native Kai Greene at any given competition. He won the Arnold Classic in 2009 and 2010, then didn’t compete in 2011. He finished 4th in Mr. Olympia in 2009, then underperformed in Mr. Olympia 2010 and finished 7th. So, you just never know. He could finish anywhere from 10th to 1st at this year’s Mr. Olympia.

Height: 5’8”
Competition Weight: 250 lb
Off-Season Weight: 280 lb
Miscellaneous Stat: has an artistic side, and claims: “I utilized my own physique to gain a greater understanding of space and movement, creating works of art that became increasingly detailed and complex over time.” 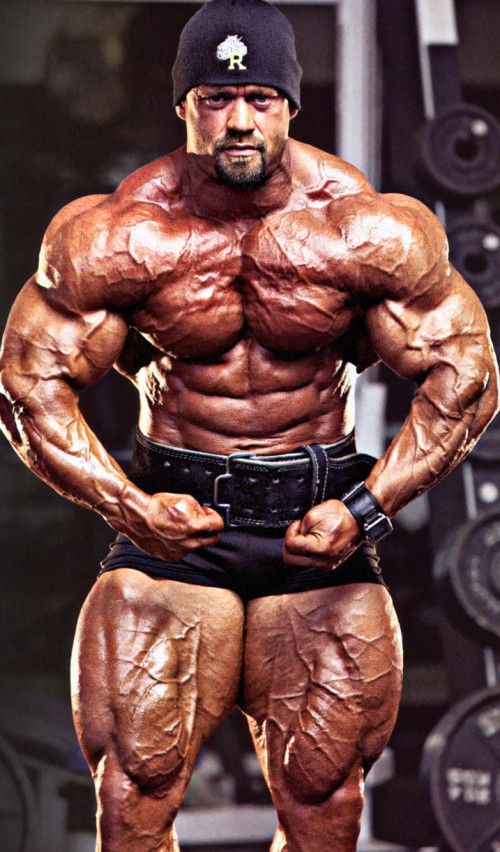 Branch Warren? Trunk Warren is more like it. I mean, the guy’s nickname is Quadrasaurus Flex. Anyway, at the age of 36, Branch here is currently experiencing his best run as a IFBB pro bodybuilder. In 2009 he finished 3rd and 2nd in the Arnold Classic and Mr. Olympia respectively. In 2010 he finished 2nd and 3rd. This year, he finally won the Arnold Classic, and appears set to challenge Jay Cutler for ultimate bodybuilding supremacy at Mr. Olympia in September. 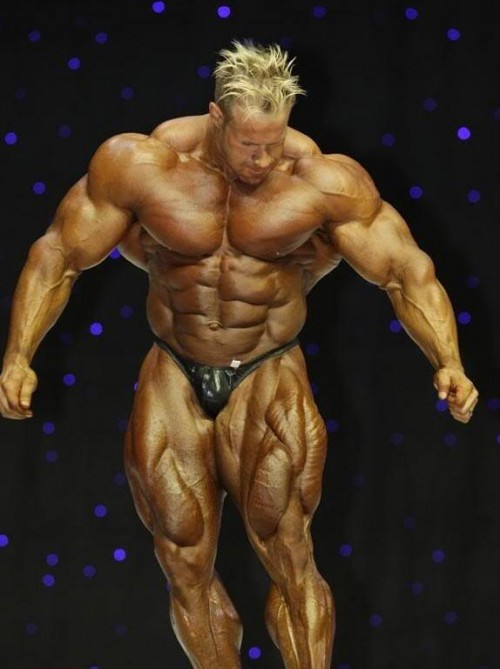 Unlike the Jay Cutler who is the quarterback for the Chicago Bears, this guy has had nothing but success over the last decade. What kind of success? He’s won four of the last five Mr. Olympia competitions (2006, 2007, 2009, 2010), and in the past he’s won three Arnold Classics (2002-2004). Before his string of Mr. Olympia victories, he placed 2nd behind the previous champion (Ronnie Coleman) four times. After somehow losing the 2008 Mr. Olympia title to Dexter Jackson, Cutler became only the third person to ever regain his Mr. Olympia title (the others being Arnold Schwarzenegger and Franco Columbu), and the only person to regain is from the guy who took it in the first place.