Is Hitting 3 Backwards Half-Court Shots In A Row A World Record? (Video) 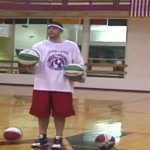 While searching through the archives at GuinessWorldRecords.com, I came across some rather odd records, like “the longest distance keeping a table lifted with teeth,” “the fastest time to blow up a balloon with the eye,” and “the longest winning streak on Street Fighter IV.”  One record I couldn’t manage to find, however, was “the most consecutive no-look half-court basketball shots made.”

Strangely enough, this dude, who goes by the name of Jason “White Shadow” Gibbons, claims to hold that record after hitting three consecutive no-look half-court shots.  His record can be found on RecordSetter.com, although I can’t help but question the legitimacy of both the website and the record in general.

So what do you think?  Does this dude have the record for most no-look half-court shots in a row?  Do you believe that no one has ever hit four in a row?  Not even Dude Perfect?  Take a look below and judge for yourself.