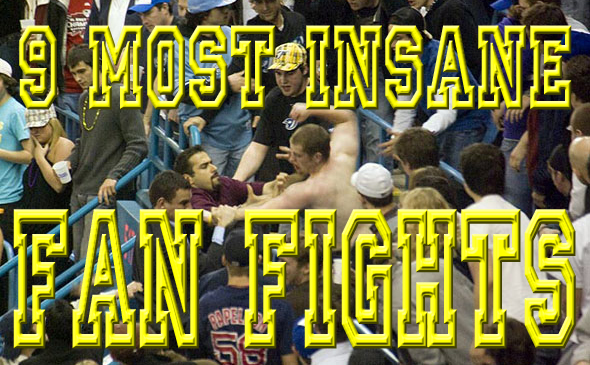 Over the weekend there were several nasty incidents of fan violence in the world of sports. Maybe you read about them on this website? Anyway, while the stuff that happened this weekend was on the extreme end of the spectrum, acts of violence among fans attending sporting events are nothing new. In fact, such incidents seem to be on the rise—almost like brawling itself is becoming one of the main attractions. So we thought it might be interesting to make a list running through some of the more notable instances of fan fights in recent years. For the most part, the fights on this list will be fan-on-fan skirmishes; however, there may be one or two exceptions. Check out the list and let us know if we left out any particularly infamous fan fights.

This fight is pretty wild, even for a soccer game. First, a fight between a couple of fans appears to spill out onto or very near the playing field. Then it moves back up into the stands, expands to include about 20 people, and climaxes with one guy throwing a metal drum at another guy, knocking the latter out. So, yeah, like I said, pretty nuts even for soccer.

This one is bizarre. From what I can tell, the problem here seems to be just one inebriated gentleman antagonizing the crowd, cheerleader guy, a camera man, and the security guard. Yes, I said the security guard—singular. (I’m guessing brawls are rare at Japanese baseball games.) Eventually, the surrounding fans get fed up with the drunkard and take matters into their own hands. The drunk guy in the white t-shirt is getting pummeled before the security guard (still singular) and a guy in a blue shirt come to his aid. Then the jackass gets back up there and starts antagonizing people again. Weird, right?

Now here’s a baseball brawl that makes sense to me. I mean, I don’t know why all these people are fighting (did alcohol play a role?), but the way it plays out—with a whole team of security guards intervening—strikes me as far more logical than the incident in #8. On a side note, you know it’s a good brawl if one or more people ends up shirtless (see around 2:29).

Apparently, what we have here is a couple of over-served fans at a Vancouver Canucks game deciding to make like the pros and engage in some fisticuffs. Take a good look, folks, because this is probably the only time you’ll ever see anyone in a Sedin jersey throwing punches. The guy on the left probably felt really great about himself afterward; however, I would be remiss not to point out that he had a clear tactical advantage—i.e., higher ground—over the other pugilist.

Yeah, I know this one just happened on Saturday. But it’s a pretty intense fight, and part of what is surely one of the most violent games in NFL history. If you look carefully, you’ll see why some reports are saying many of the brawls at the August 20 preseason game had more to do with gang allegiance than team allegiance. This is not simply at Raiders fans vs. 49ers fans situation.

4. Grown men steal hockey stick from little girl, then fight over it

Remember this gem from the 2009-2010 NHL season? It ranks high on this list not so much because of the extreme violence (as far as fan fights go, it’s somewhat tame) but because the whole thing was over a hockey stick poor Scott Niedermayer was trying to give to a little girl. I mean, who steals a hockey stick from a little girl? Oh, that’s right, a giant douche. 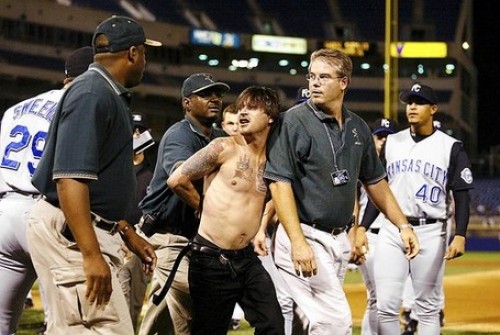 Okay, technically this is not fan-on-fan violence, here, but it was too good not to list at #3. During the 2002 MLB season, two drunk (or high, or stupid, or all of the above) shirtless dudes—a father and his son, no less—leapt over the fence and onto the field at U.S. Cellular Field in Chicago and attacked Kansas City Royals coach Tom Gamboa. The 34-year-old William Ligue Jr. and his 15-year-old son claimed their attack was provoked by something the Royals coach said. But unless it was, “I’ll give you a million dollars to jump on this field and attack me,” it’s hard to feel to sorry for these guys.

2. Chinese soccer fan karate kicks guy in the back

This fan attack is just downright cold. I don’t care what the guy in the brown shirt said to the guy in the blue shirt. You just do not kick a dude in the back and knock him down an entire bank of bleachers, face-first. Still, perhaps the most interesting part of this video is the way the guy sitting to the left of the victim doesn’t really seem phased by the violence.

Philadelphia sports fans aren’t exactly known for their gentle warmheartedness, but this instance of fan violence absolutely takes the cake. Hell, even the other Philly fans in the stands at Citizen’s Bank Park probably stopped throwing batteries at opposing players and threw them at this guy. Why? Because he intentionally vomited on an off-duty cop and his 11-year-old daughter. Mathew Clemmens: the worst human being (non-murderer category) ever?