Close Call: Little League Pitcher Saved From Line Drive By The Bill Of His Cap (Video) 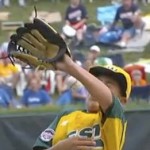 I always figured the purpose of the baseball cap was to keep the sun out of your eyes. Well, it turns out that, for one tough kid playing in the Little League World Series, the baseball cap is also an extremely important piece of safety equipment.

Braydon Salzman is a pitcher for Huntington Beach, California. In a game Friday against the team from Cumberland, Rhode Island, Salzman was nearly hit in the forehead by a line drive off the (explosive aluminum) bat of a youngster named Ryan McCormick. What saved Salzman? The bill of his cap.

Check out the amazing video. In slow motion, you can see the ball hit the bill of the cap, which then crumbles up as it absorbs the blow:

I’m sure it didn’t feel so good when that cardboard-like bill smacked up against the kid’s forehead, but the ball sure would have felt a hell of a lot worse.

I guess we’ll file this one under “close calls.”