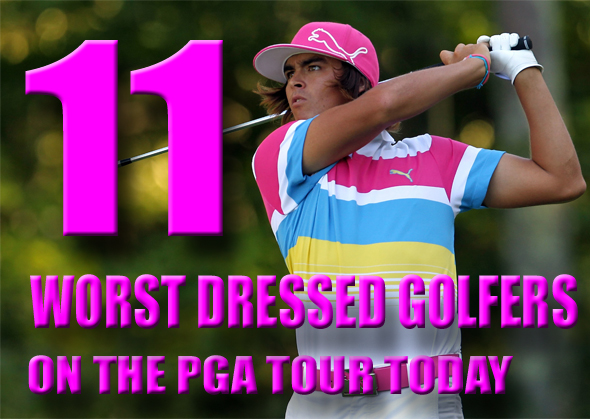 Perhaps no other professional sporting organization allows for its participants* to express themselves through their attire as much as the PGA Tour. More often than not, athletes are limited by official uniforms or the need to wear as little as possible in order to compete (as with swimming, for example). But golfers are lucky. They get to wear shoes, pants, hats, shirts, vests, sweaters, jackets, gloves, and sunglasses—a vast array of options that a player can mix and match to find the exact combination that expresses their inner being.

Unfortunately, when it comes to style, some golfers got it, others don’t. Today we’re going to take a look at the golfers whose attire would benefit from from a little constructive criticism. So without further ado, behold: the 11 Worst Dressed Golfers on the PGA Tour.

*Sue me, but I just can’t bring myself to call pro golfers “athletes.” It feels…weird. 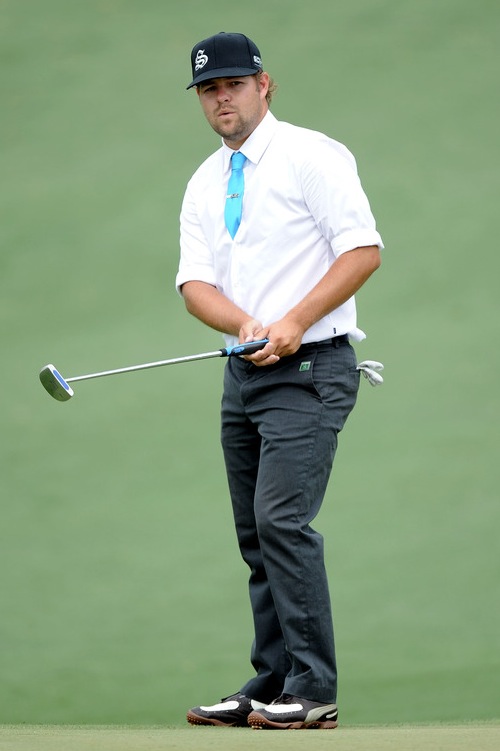 The outfit you see Ryan sporting here would be totally appropriate if he were attending a professional skateboarders awards banquet. In my opinion, I don’t think it really works on the golf course. Of course, in this 2009 photo, Ryan is just trying to promote his own golf equipment company, Scratch Golf. I guess the idea was to make golf “cool” so more hip youngsters would give it a try. Little did they realize that what mainly keeps hip youngsters away from golf are $45 greens fees, not the sport’s image. Plus, that hat is stupid. 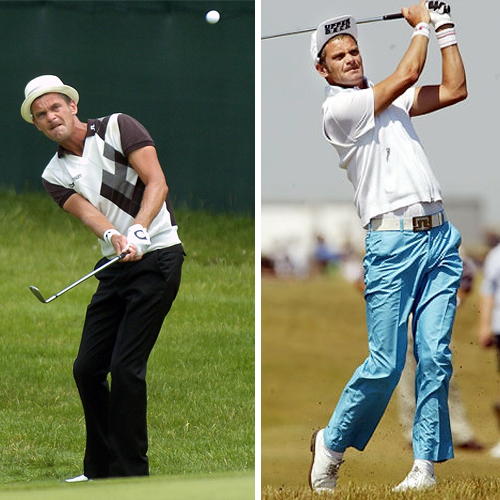 This wacky Swede is a tough nut to crack. Back in the day, Jesper Parnevik was consistently one of the worst dressed golfers on the PGA tour—a feat accomplished by rocking the ball-cap-with-up-turned-bill look (right photo). Shockingly, these days, every once in a while, Jesper shows up for a tour event looking damn good (left photo)—like the (much older) Justin Timberlake of golf. I ended up putting him on the “worst dressed” list because, well, that’s how most people remember him.

Okay, Tom Purtzer’s shirt, though not particularly fashionable, isn’t that bad for a guy his age. It’s a typical dad shirt. What really cements his status as one of pro golf’s worst dressers are pants like these. Oh, and that ridiculous belt, which is like the kind that was popular among boys at my elementary school circa 1992. He must really take care of that thing, rubbing it with mink oil and polishing the buckle once a week, because I don’t think you can buy a belt like that anymore. Except maybe at some hipster thrift shop, but from the looks of it there’s not an ironic bone in Mr. Purtzer’s body, so I doubt that’s where he got it. 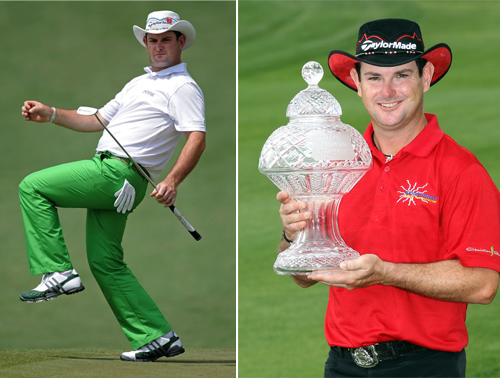 Rory Sabbatini is perhaps best-known for a perceived “feud” with Tiger Woods. In 2007, he made several comments to the effect of, “Tiger is slipping,” about which the press and fans gave him a hard time. I suspect people wouldn’t have made as big a deal of it if he were not from South Africa. The unfortunately thing, however, is that all this phony controversy has distracted the golfing world from the real issue: his ridiculous golf attire. Those hats? God. Aweful. Period. Now, I actually kind of like the green and white outfit on the left (minus the hat), but the red and black outfit with big belt buckle? Better suited for the rodeo than the back nine. 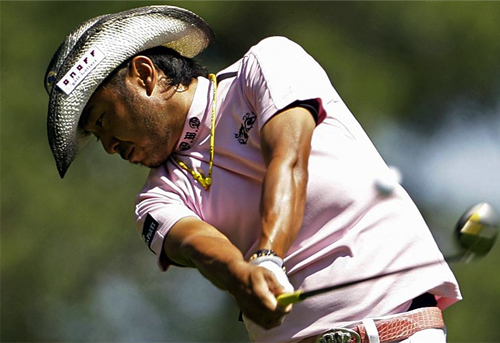 Hey, nice work Shingo. You found a hat that’s stupider than Rory Sabbatini’s. Not an easy task. Also, love the short-sleeved mock turtleneck and alligator skin belt. Plus, baby pink? Definitely your color. With ensembles like these, it’s no wonder you’ve finished as high as 4th at both the Masters and PGA Championship. 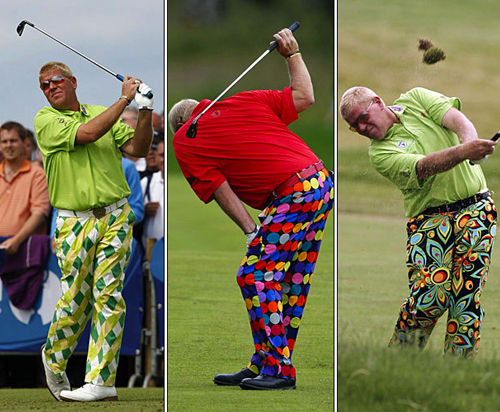 I think John Daly buys his pants wherever Don Cherry buys his coats. Which is a good thing, because what would the PGS Tour be without the closest thing we’ve ever had to a real Happy Gilmore? (Boring. Boring is the answer I was looking for.) 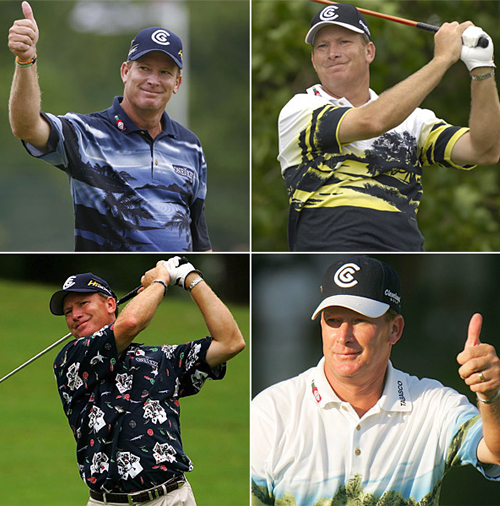 Some Woody’s are cool (like Harrelson, or Guthrie). Some aren’t. Woody Austin fits into the latter category. The shirts he wears are some of the most gaudy monstrosities you will see at a pro golf tournament. And dude, chill with the tropical theme. I know you’re from Tampa, but come on. You don’t see dudes from Edmonton wearing shirts with igloos and polar bears. 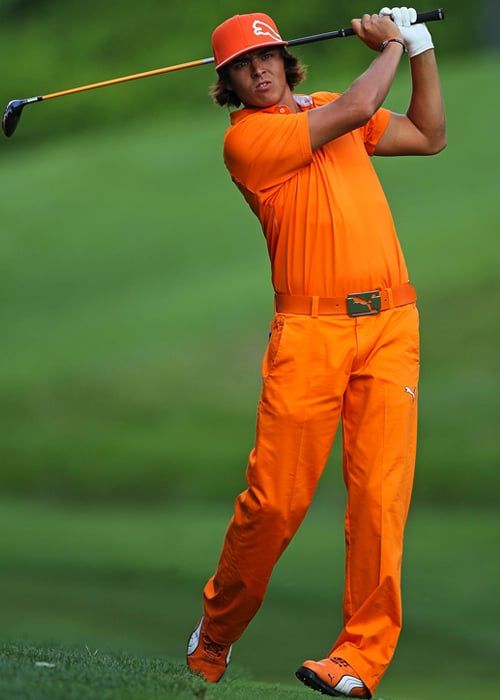 In case you couldn’t tell, 22-year-old Rickie Fowler is one of the youngest pros on the tour. Hopefully this is not a sign of where things are headed. I mean, I like that he has Puma for a sponsor. That’s much better than something lame, like TaylorMade. But he needs to chill with the head-to-toe neon. Not cut it out altogether, just scale it back. Also, he must—absolutely must—lose the Justin Bieber hair cut. He’s young, but he’s not that young. It’s just embarrassing. 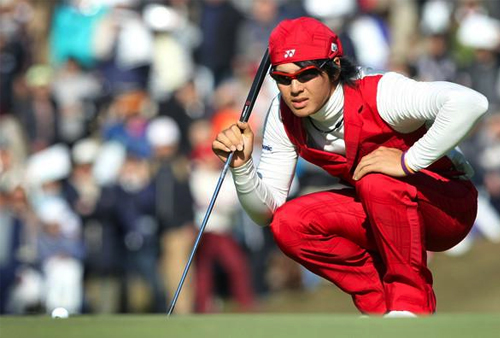 Red pants—check. Red cabbie hat, backwards—check. Red vest—check. White long-sleeved turtleneck—check. Yes, I’d say Ryo Ishikawa has all the ingredients for one of the worst individual outfits in the history of pro sports. I think the order would be the 1976 White Sox unis with the shorts, then the Vancouver Canucks “V” jersey from the 1980s, then this beauty from Ryo Ishikawa. Simply aweful. On the other hand, when the tournament is over, Ryo can head straight to the local discoteque for a swinging good time. 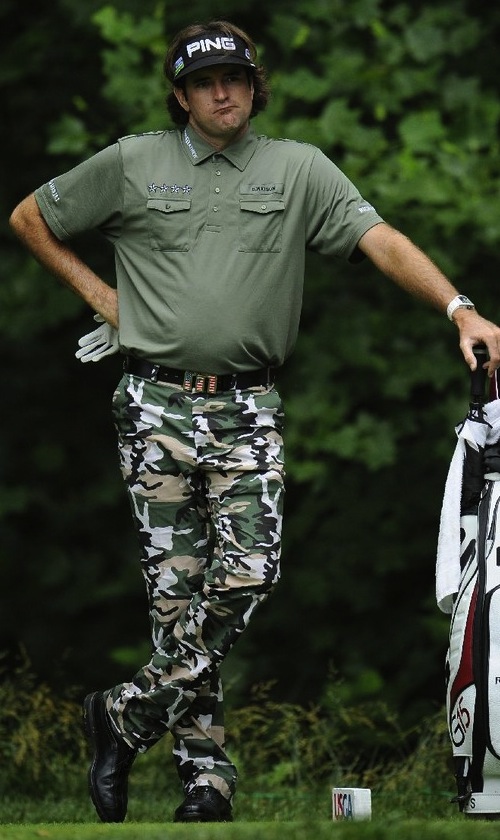 You gotta wonder if Bubba has a 12-gauge in his golf bag so he can shoot him some ducks while waiting for his partner to tee off. Otherwise, why the silly getup? Still, I must give Bubba credit for going all-out with this ensemble. He didn’t just wear these pants with a normal golf shirt and shoes. He got himself a nice military polo complete with general stars and name tag, plus black military boot-looking golf shoes. So at least he was fully committed to this fashion statement. 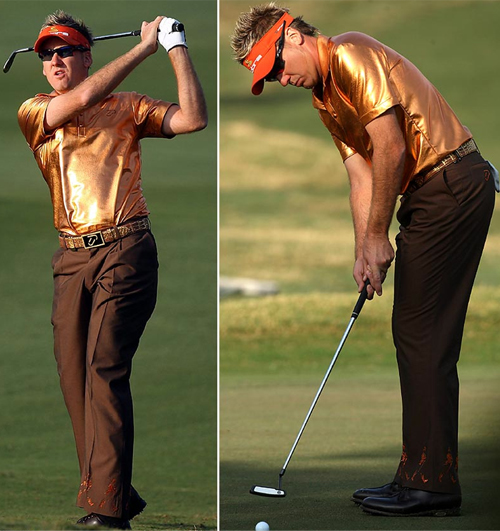 Ian Poulter is from merry old England. So why does he look like a skeezy Vegas hotel and nightclub owner named Jimmy “Shakes” Bondarelli from 1973? He really is the worst dressed golfer on the PGA Tour, isn’t he?