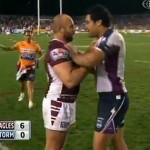 I love baseball, but when teams brawl there’s hardly ever a solid punch to be seen. So MLB players could learn a thing or two about brawling from Australia’s top rugby league, the Telstra Premiership. Hell, even NHL players could probably pick up a few pointers by watching this super heavyweight battle between Glenn Stewart’s Manly-Warringah Sea Eagles and Adam Blair’s Melbourne Storm.

It all starts when a Sea Eagles player gets an elbow to the chin while making a tackle of a Storm player. I’m not really sure why he would take offense to it, given that he’s playing one of the most violent sports on the planet, but he does, and some pushing and shoving breaks out.

Well, in that initial pushing and shoving, you can see Melbourne’s Adam Blair sock somebody in the pile of people with a pretty good uppercut. This probably has something to do with the one-on-one fight that breaks out minutes later between Blair and Stewart.

Watch these two beasts have at it for yourself:

Normally pro sports leagues frown on such violent outbreaks. But after that whole Joel Monaghan “dog sex” scandal a little while back, pro rugby could use this kind of publicity.