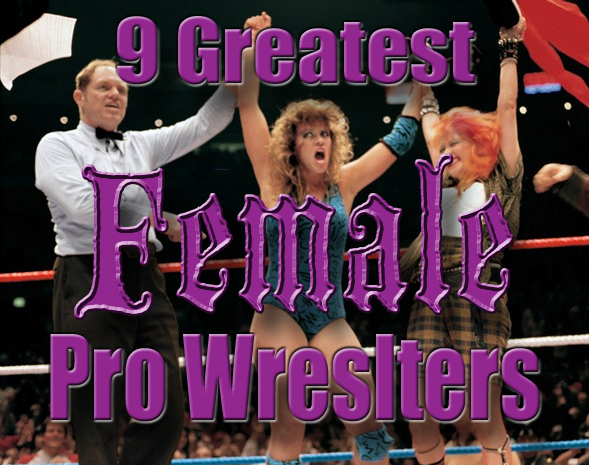 Most of the time, as with most sports, the world of pro wrestling is dominated by men. However, every once in a while, a female wrestler comes along who is so captivating that she takes the wrestling world by storm—I’m talking women who not only dominate other women in the ring, but who quite often can hold their own against the men as well. But despite the fact that the wrestling world is occasionally conquered by women (and despite the fact that it is about 10 times more entertaining when this is the case), for some reason there is still not enough attention paid to the contribution women have made to the history of the sport. So I thought I would put together a list of the 9 greatest female competitors in the history of professional wrestling. Read, watch, learn, and enjoy. Oh, and if you disagree with the order of the list, or if you think I left anyone out, leave a comment and let me know.

Because the career of Melina Perez is still ongoing, I couldn’t place her any higher than #9. Of course, it’s not like cracking the all-time top-10 is some kind of slight or anything. As of August 2011, it appears that Melina’s run with the WWE is either over or on hold, as her contract with the world’s top pro wrestling promoter was terminated. However, I’m betting the Mexican-American Diva makes a return at some point, and that they write up a scenario in which she gets another crack at a title. If that is the case, then she could move higher up on this list of all-time greats. We’ll have to wait and see.

Chyna’s career in the WWE may have been somewhat short (1997-2001) compared to other wrestlers on this list, but she was a pretty big deal. And not just because she was the most brawny model in Playboy history, either. No, Chyna was amazing because she competed full-time against men, and did quite well. She was the first women to participate in the Royal Rumble, the first to qualify for the King of the Ring, and the first to ever be considered the number one contender for the WWE Championship. Of course, she also held the WWE Women’s Championship for a time.

With a ring name like Awesome Kong, Kia Stevens has to be on this list. Without this bad-ass women, TNA’s Knockout probably would have failed miserably. Instead, Kong and Knockout became true wrestling attractions—so much so that Kong made the move to WWE in 2010. Her arrival in the WWE was very hotly anticipated, as indicated by the series of commercials the WWE released foreshadowing her arrival. Unfortunately, she didn’t compete very long before she announced she would be taking a pregnancy leave. Still, I’d be wary of her return if I were a WWE Diva, because Kong can bring the pain.

Maybe you thought the modern WWE came up with the idea of sexualizing female pro wrestling. Well, watch this clip from 1955 and think again.

June Byers, active in the 1940s and 1950s, was probably the second or third true star of women’s pro wrestling. After reigning champ Mildred Burke (#3 below) had a falling out with her husband Billy Wolfe (a major promoter for the National Wrestling Alliance) and left the pro circuit in 1953, the vacuum was filled by Byers. Then, when Burke finally returned to wrestling, she and Byers had one of the most famous “shoot” matches—i.e., one that went off-script and became truly competative—in the history of pro wrestling. In a controversial decision, June Byers was declared the winner, and she retained her championship title until she retired in 1956. The real-life animosity between Burke and Byers probably had something to do with the fact that, despite being the daughter-in-law of Billy Wolfe, it was believed Byers was having an affair with him. Yikes. You can’t write that kind of drama, can you?

(At this point, I should give an honorable mention to Mae Young, another early star of female pro wrestling. If this were a list of great pioneers of women’s wrestling, she’d be at the top. However, Mae was always second-fiddle to other wrestlers during her heyday.)

If you can get get past the schmaltzy Peter Gabriel music in this clip, what you’ve got is an absolutely insane wrestlin’ move. Sure, it ended in a scary injury for Lita—whiplash—but taking those kinds of insane risks is often what makes the best the best. And Lita is one of the all-time great female wrestlers. Not only was she the WWE Women’s Champ 4 times, but she also had one of the most insane story arcs in the history of pro wrestling. She went from good girl to bad girl, from man to man, and was even supposedly pregnant by the great Kane—only to suffer a miscarriage in the freaking ring, on live television. That’s easily one of the most daring plot twists the WWE has ever tried.

Wendi Richter was greatest female wrestler of the 1980s, and one of the few to achieve real mainstream pop-icon status. In a stroke of pure genius, in 1984 the WWF formed a partnership with MTV and Cyndi Lauper (the Lady GaGa of the early 80s) to create a series of hugely popular crossover promotions called “Rock ‘n’ Wrestling.” It was during one of these promotions—“The Brawl to End it All”—that Wendi Richter, with Cyndi Lauper in her corner, finally became the women’s WWF Champion, ending the legendary 28 year reign of The Fabulous Moolah. The match was the most-watched event in MTV history to that point. It dramatically improved the image WWF and made Richter a household name.

Mildred Burke was probably the first big star of women’s pro wrestling. She dominated the sport from the 1930s until the 1950s. And if she hadn’t gotten fed up with her slimy philandering husband, Billy Wolfe—who was the sport’s top promoter—she probably would have maintained her title for at least 5 years longer than she did. As it was, her husband pretty much made sure she lost her title when she left him. Fortunately, this turn of events didn’t tarnish her legacy as one of the greatest female wrestlers of all time.

When Canadian beauty Trish Stratus rose to fame in the early 2000s, she was the first real female wrestling superstar in a pretty long time. Sure, there was Chyna, but to the public she was a bit more of a novelty. Stratus was the real deal—beloved, desired, respected, and then, like all wrestling stars, hated. She won 7 WWE Women’s Championships (the most in WWE history), a WWE Hardcore Championship, was named WWE Babe of the Year 3 times, and was proclaimed the “Diva of the Decade.”

All you need to know about the late great “Fabulous Moolah” (real name Mary Ellison) is that she was recognized as the undisputed women’s pro wrestling champ for 28 consecutive years from 1956 to 1984. She truly is the link between the past and the present. Oh, and she briefly reclaimed her title in 1999 at the age of 76, becoming the oldest woman to hold the Championship. Given that pro wrestling outcomes are predetermined, the fact that they made her champ at that age is one serious sign of respect. How could she not be considered the greatest of all time?