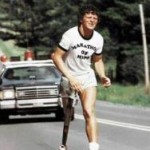 It was on this day in 1980 that Terry Fox ended his Marathon of Hope.  Fox was forced to cut his run short due to his health problems.

Terry Fox embarked on a cross-country run of Canada, despite having his right leg amputated a few years earlier after he was diagnosed with osteosarcoma.  Fox’s main objective for his journey was to raise money for cancer research, but also to raise awareness for those unfamiliar with the disease.  After 143 days and 5,373 kilometres, Terry ended his quest as his cancer had spread throughout his body, which ultimately led to his death.  Although he was gone, Fox’s determination and courage is carried on through The Annual Terry Fox Run.

The first annual Terry Fox Run was held in 1981 and has since grown into a worldwide phenomenon.  Every year millions of participants in over 60 countries get involved for the largest one-day fundraiser for cancer research.  To date, over $500 million has been raised from the Terry Fox Run.

Here is a clip of Terry Fox running.