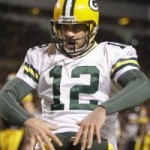 Thanks to 28 touchdown passes and four touchdown runs, football fans everywhere were able to become awfully familiar with Aaron Rodgers’ “championship belt” touchdown celebration.  By the time he was lifting the Lombardi Trophy following a 31-25 victory over the Pittsburgh Steelers at Super Bowl XLV, everyone knew the meaning behind the two-handed gesture that the Packers quarterback was often seen making just above his crotch area.  However, when A-Rod first broke out the celebration, not everyone was on the same page as him, including Packers head coach Mike McCarthy.

According to McCarthy, Rodgers first broke out the celebration in practice, at which time he believe it had some sort of sexual connotation behind it.  After realizing what Rodgers hands were being wrapped around an imaginary belt, and not an imaginary woman, the Super Bowl MVP was free to flaunt his belt whenever and wherever he wished.

Here is a look at McCarthy and Rodgers discussing the championship belt celebration on The NFL Network’s America’s Game.