9 Reasons Why You Should Follow The 2011 Rugby World Cup 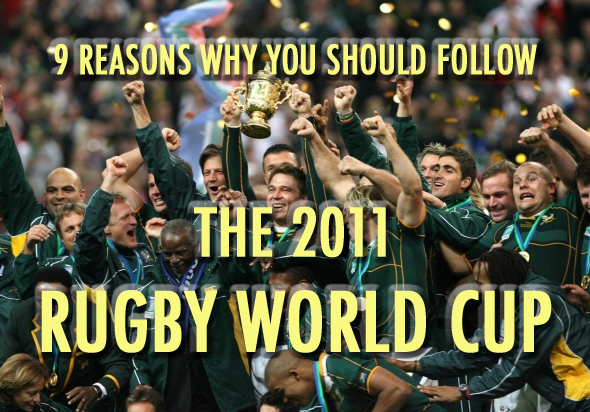 The Rugby World Cup kicked off this past Friday in New Zealand with the kind of elaborate spectacle we have come to expect from major world sporting events (you know—music, dancing, pyrotechnics, colonial nations trying to placate their guilt by paying homage to indigenous cultures). While we here at Total Pro Sports have already given you one really good reason to keep an eye on the Rugby World Cup (highlight reel-machine Brian Habana), the month-long event has so much more to offer. So here is a list of 9 other reasons you should follow the 2011 Rugby World Cup. Yes, I know the NFL just got underway but, come one, if this list doesn’t at least pique your curiosity, you’re probably not a real sports fan. (Too harsh? Oh well, that’s what the comments sections is for—setting me straight.) 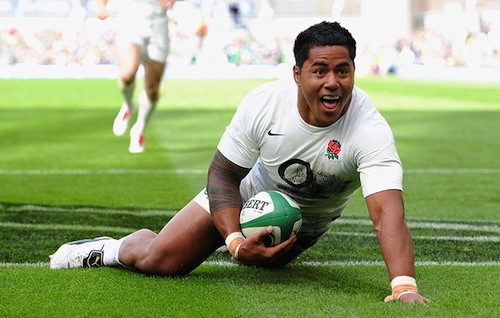 You probably already know that rugby players are tough as nails and deliver bone-crushing hit after bone-crushing hit, but do you also know how ridiculously talented they are? (If you followed by suggestion and clicked on the link above, then yes, you do.) There are a ton of amazing players you can watch over the next month and a half who are worth the price of admission (or additional fees you may incur from your cable provider).

Among them is the bad-ass dude pictured here, Manu Tuilagi, a 20-year-old center back for the English squad who is almost as fast as he is powerful. You may also want to keep your eyes peeled for scrum-half back Will Genia of Australia (supposedly a tactical genius); fly-half back Dan Carter of New Zealand (a point-scoring machine); scrum-half back Fourie du Preez of South Africa (another tactical wizard); and center back Brian O’Driscoll of Ireland (who has scored a record 44 tries in 113 international matches).

New Zealand’s team is called “The All Blacks.” Sounds racist to North American ears, but the name simply refers to their traditional uniforms, which are (you guessed it) have black shoes, socks, shorts, and shirts.

The Australian rugby team is nicknamed the Wallabies after the famous species of marsupial found on their home continent.

Sadly, the American squad is not named after their country’s local marsupials, though “The Fighting Possums” has a nice ring to it. Instead, the USA rugby team is called the Eagles, for obvious reasons.

Then there is the team from South Africa, lovingly called the Springboks. While those of us in the Western hemisphere may think a springbok is a seasonal offering from a microbrewery, zoology fans know that the springbok is a variety of gazelle. (No, I don’t know why they aren’t just called the Gazelles.)

What about the French, you ask? Well, they’re too cool for a silly nickname. They are known simply as “Les Bleus” (French for “The Blues.”) Lame, right? 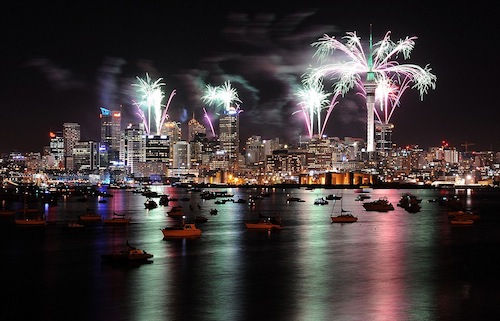 The quadrennial tournament is the 3rd-biggest sporting event in the world after the Olympics and the (Soccer) World Cup. The 2007 tournament had a cumulative TV audience of 4.2 billion for the 48 matches, or an average of 87.5 million viewers per match. To give you some perspective, the most-watched Monday Night Football game of all time had about 30 million viewers, while the average 2010 World Cup game had about 125 million viewers. So, yeah, the Rugby World Cup is pretty big. 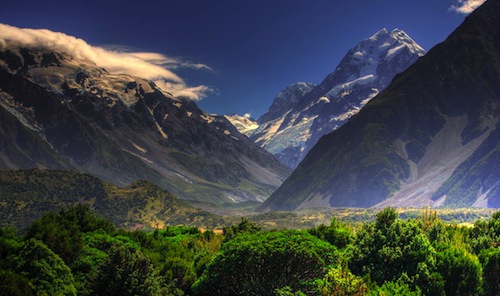 The first ever Rugby World Cup took place in Australia and New Zealand in 1987. This year it finally returns to New Zealand, but this time they don’t have to share it with the Aussies. I wonder if this has something to do with the fact that New Zealand’s stature as a tourist destination has increased over the last decade thanks to Peter Jackson filming his entire Lord of the Rings trilogy there?

In any case, for rugby novices in North America, there is a real advantage to the games taking place on the other side of the globe and, therefore, in the middle of the night. And that advantage is this: if you do try to watch the games, you’ll be so delirious that you won’t mind it if you don’t completely understand the rules. 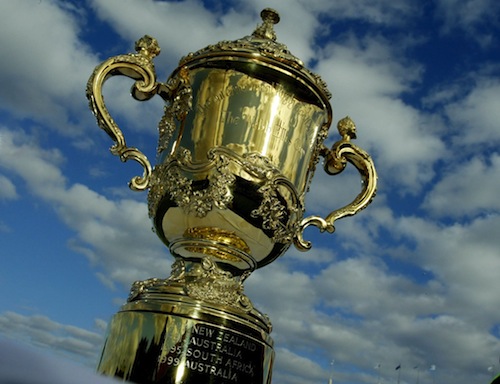 According to legend, the game of rugby was born in 1823 when a young man named Webb Ellis illegally caught the ball during a game of football, then decided to run with it to the other end of the field. It’s a cute story, but almost certainly untrue. Nevertheless, there is a statue of Webb Ellis in front of the Rugby School (the English boarding school where the game evolved from regular English football), and the trophy presented to the winner of the Rugby World Cup is called the Webb Ellis Cup. Hey, everybody needs their myths, right?

4. Rugby is kind of a combination of soccer and American football 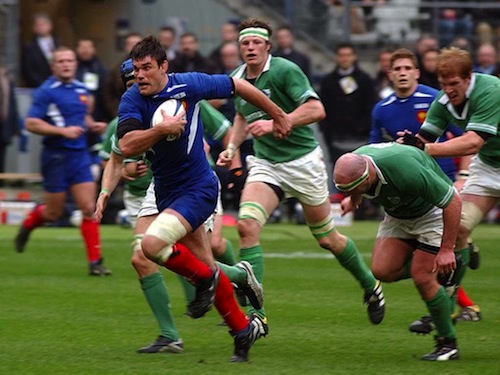 Soccer and American football have a shared past, and rugby is the missing link. Like American football, the ball is carried, thrown and kicked, and the goal is to either get it to the end zone or through the uprights. Oh, and there’s tackling—beautiful, vicious, glorious tackling. However, like soccer, the game flows more freely, with players running all over the field in all directions looking for a hole in which to move the ball forward.

Watch this amazing play to see the similarities for yourself. 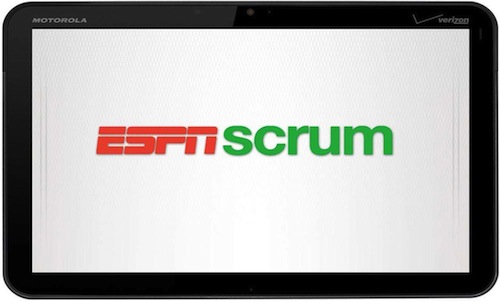 There’s probably no easier way to follow the 2011 RWC than on your smartphone. The event’s governing body, the International Rugby Board, has its own app for Android devices as well as iPhones. If that app doesn’t ring your bell, Fox Sports has their own RWC app, so you might want to give that a try.

And if apps aren’t your thing, did you know ESPN has a website dedicated entirely to Rugby? Well, they do. It’s called “ESPN Scrum,” it’s quite thorough, and there is a dedicated mobile version. Coincidentally, ESPN also has websites dedicated specifically to soccer, Formula 1 racing and, most surprising of all, cricket. Who knew their “Worldwide Leader In Sports” moniker is kind of accurate?

It’s just a shame ESPN is so lame.

2. Morgan Freeman made a movie about it 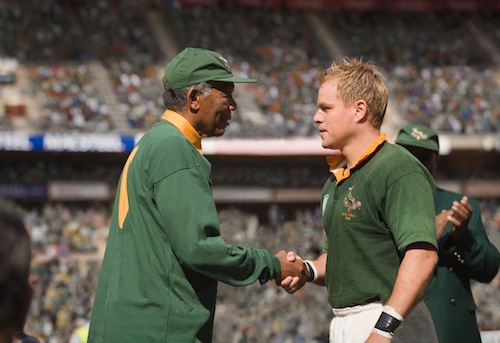 (In all seriousness, though, it is a pretty good film and would definitely help give you a sense of how big the RWC is in certain parts of the world.)

1. New Zealand is the favorite and USA is the underdog 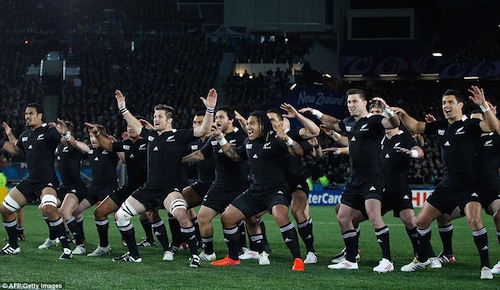 In the rest of the world’s major sporting events, New Zealand may be minnows, but in rugby they are giants. And that is awesome, if you ask me.