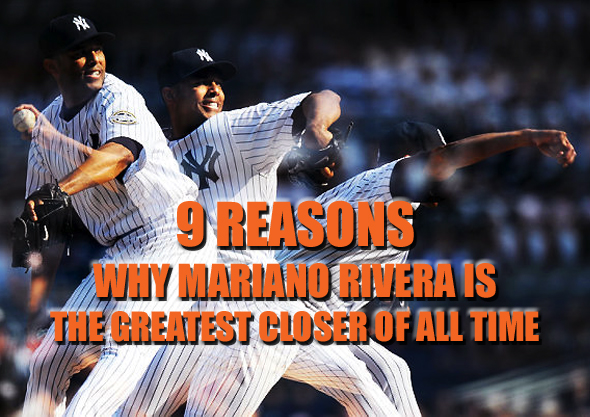 Any day now, 41-year-old New York Yankees closer Mariano Rivera is going to break the all-time saves record. Now, personally, I don’t think the “save” should be as big a deal as it is. One guy gets a “save” after coming on in the bottom of the eight with the bases loaded, nobody out, and his team up by just one run. Another guy gets a “save” after starting the 9th with nobody on, a three-run lead, and the 6-7-8 hitters up. In the record books, they’re both just “saves,” which is kind of stupid, isn’t it?

Still, you absolutely cannot deny the greatness of Mariano. He is one of the best pitchers in the history of baseball. So if a goofy stat like the “save” helps people understand how incredible he is, then I guess it can’t be all bad. But just to round things out a bit, here are 9 more reasons (in addition to his soon-to-be 602 career saves) why Mariano Rivera is the greatest closer of all time. 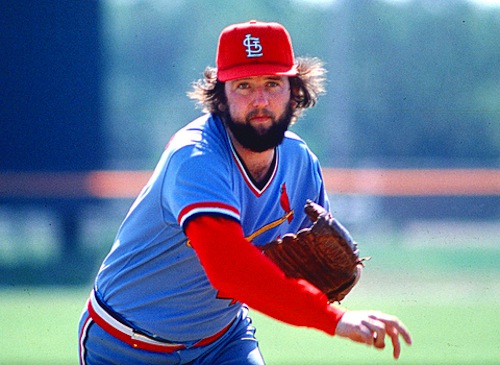 The role of the closer has changed a lot over the years. Greats like Rollie Fingers and Bruce Sutter in the late 70s and early 80s would regularly work more than one inning to get the “save.” But by the early 90s, for whatever reason, managers started reserving their closers for only the last three outs.

Mariano Rivera came along in the era of the three-out save. So some might be tempted to say he’s not as great as those guys who had to work longer for the save. But Mariano has shown, when given the opportunity, he can be just as deadly over two innings as he is for one. Since 1994, Rivera has 116 saves of more than 3 outs. The next closest guy, Keith Foulke, has only 55, and the reigning (soon to be former) career saves leader, Trevor Hoffman, had only 52.

The lesson: don’t let the wussy era in which Rivera pitched fool you. The man is a stud. 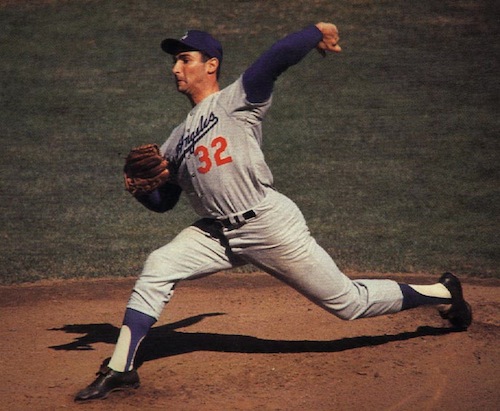 The strikeouts-to-walk ratio is important because it’s a measure of a pitchers ability that is completely independent of what his fielding teammates do behind him. It measures how much better he is at taking opportunities away than giving freebies to batters. 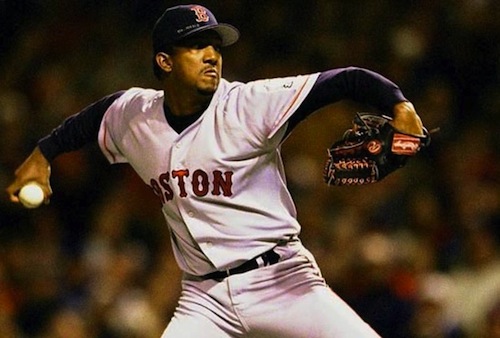 WHIP stands for walks and hits per inning pitcher. Like strikeout-to-walk ratio, it’s another way to measures a pitcher’s stinginess. A number less than 1 is excellent, because it means a pitcher allows less than 1 base runner per inning. Without base runners, teams don’t score runs, so it should be obvious that a really low WHIP is desirable.

Mariano’s WHIP of .999 is the second-lowest in the history of baseball. Three of the other guys in the top 5 were born before 1900. The guy at #5 is Pedro Martinez. 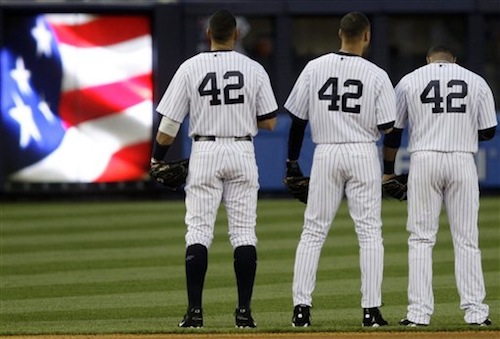 Major League Baseball retired Jackie Robinson’s number back in 1997, meaning no one is ever allowed to wear #42 again. No one except for Mariano Rivera. Since he was already wearing #42, MLB let him keep it. But do you think they would have made that exception for just anyone? (Answer: hell no.) 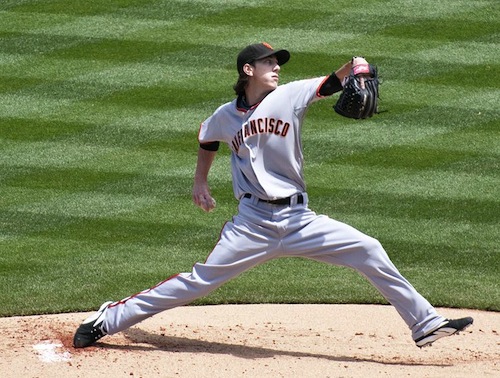 Mariano’s career earned run average of 2.22 puts him at #13 all time among pitchers with more than 1,000 innings pitched. And this includes his very first year in 1995, when he was a starter with an ERA of 5.51. Obviously, ERA doesn’t mean quite the same thing for relievers that it does for starters, but this is still nuts. There is only 1 other active pitcher in the top 200! That would be Tim Lincecum, who is #155. So while Mariano doesn’t face the exact same challenges a starter faces, the fact is the guy just has not given up many runs over his 17-year career. 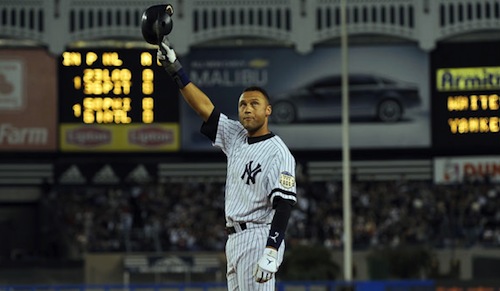 I know most people give the credit for this achievement to a little-known Yankees shortstop by the name of Derek Jeter, but I agree with Sports Illustrated scribe Joe Posnanski that the Yankees’ return to glory in the mid-90s could not have happened without Mariano. In 1996, Marino was the dominant set-up guy for Yankees closer John Wetteland, which meant games were locked down when the Yankees had a lead after the 6th inning. Could they have won the Series without that kind of dominance? Obviously, Rivera became the closer after Wetteland, and was just as dominant in that role. Jeter was huge in the 90s, but he didn’t demoralize opponents the way Rivera did. Even in his best years, Jeter made outs in 66% of hit ABs, but Mariano was the most predictable force in baseball. 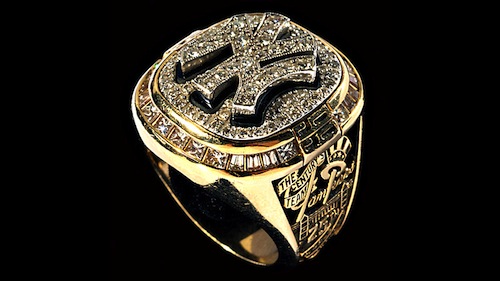 The Yankees didn’t win 5 World Series just because they had Mariano Rivera. No single player can make a team win. (If they could, the Cardinals would win every year, wouldn’t they?) But, you can’t deny that “5x World Series Champion” looks good on a resumé. Success in the regular season is one thing, but success in the post-season? Well… 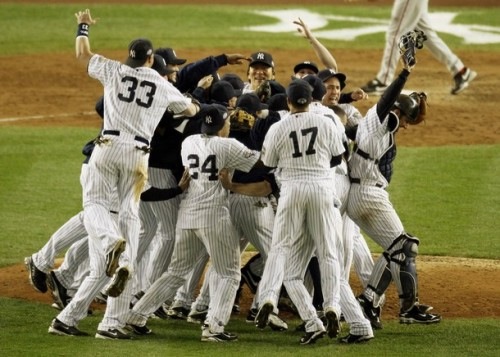 Remember before when I was talking about one-inning saves versus saves of more than one inning, and how Rivera shouldn’t be penalized just because he played in the era of wussy, three-out saves? Well, here’s a stat that further supports my argument: 31 of Mariano’s 42 post-season saves were more than one inning.

In short, when everything is on the line, Yankees managers (Joe Torre and Joe Girardi) threw convention out the window and put the game in Mariano’s hands. And he came through. In baseball, it is really, really hard to measure a player’s ability to come through “in the clutch.” With Rivera, it’s actually kind of easy. Which is amazing. 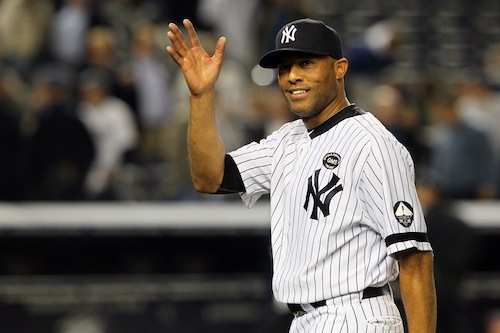 With all these stats, it’s clear that Mariano Rivera is an all-time great pitcher. But what makes him a legend is the fact that he did all of this with one pitch.

I am talking, of course, about Rivera’s cut fastball. He throws it 90% of the time. But even though hitters know it’s coming, they can’t hit it.

Jim Thome, who just recently hit his 600th home run, has said Rivera’s cutter is the greatest pitch in the history of the game. How could anyone make a case against that?