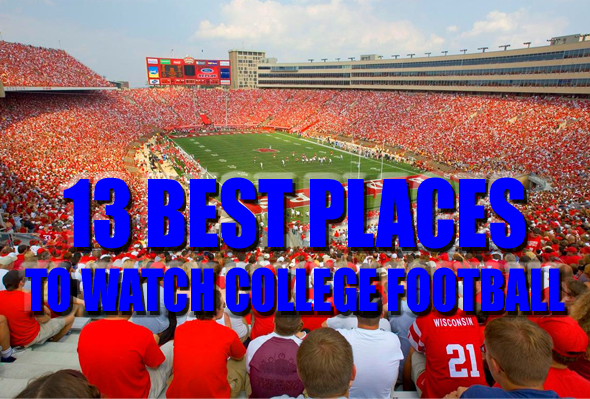 Any fan of football has to admit that, if you want to understand the soul or essence of the sport, you’ve got to start with college football. Don’t get me wrong, I love the NFL. They obviously have the better on-field product and, frankly, I’m really an NFL guy at heart. But when it comes to “intangibles” like passion, rivalries, and atmosphere, there can be no doubt that the NCAA is king.

Don’t believe me? Just think about venues for a moment. How many NFL stadiums would we say are so “hallowed” as to be worthy of a pilgrimage? If you answered “one” you’d be correct. Green Bay’s Lambeau Field is the only stadium in pro football imbued with a sense of tradition and greatness.

College football, on the other hand? When I sat down to make this list of the 13 best places to watch a college football game, I couldn’t believe how many incredible places wouldn’t be making the list. Texas A&M’s Kyle Field? Not on the list. Georgia’s Sanford Stadium? Nope, not quite. Oklahoma, Clemson, Auburn, Ole Miss and the freakin Rose Bowl? Unbelievably, none of them made it. You may think this sounds crazy, but that’s how many awesome football shrines there are in the NCAA.

So without further ado (ado sucks, and there’s already been too much of it), here are the 13 best places to watch college football. 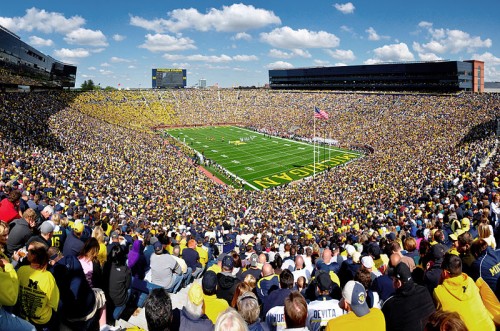 Michigan Stadium was built in 1927 and originally had a capacity of 72,000. Since then, this historic venue has expanded to hold 109,901, making it the largest capacity stadium in the United States. (I knew there had to be a reason this place is known simply as “The Big House.”) I’ve heard some people say that the “buzz” in The Big House isn’t what you would expect from a place filled with so many people and so much history. Still, I couldn’t leave the biggest venue in American sports (and home to one of the most storied college football teams) off this list. 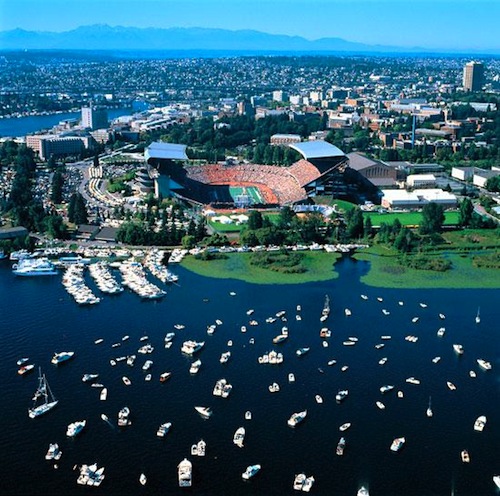 I think because they’re in the Pacific Northwest, I tend to forget that the Washington Huskies are one of college football’s great programs. They’ve won 15 Pac-10 championships, 7 Rose Bowls, and 4 National Championships (all between 1960 and 1991). So, this is a college team with some pedigree, and they’ve got the historic stadium to match. Husky Stadium opened in 1920 and was originally one of the great old bowl-style venues. They’ve since added on to the original structure to increase the capacity from 58,000 to 72,500. The fans? They’re pretty awesome, too. The average attendance at Husky Stadium in 2008 was 68,000. The team went 0-12 that year. Also, did I mention that this is one of the few stadiums in college football where people tailgate right outside on boats? Yeah, they call it “sailgating,” and it’s ridiculously awesome. 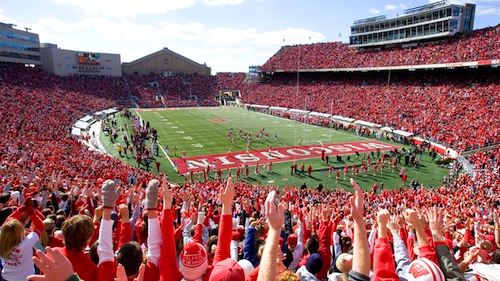 You want history? How about this: the Wisconsin Badgers’ home field is named Camp Randall Stadium because it was built on the site of a Civil War training camp. It became the grounds for Badgers football in 1895 and the site of a permanent structure in 1917. Since then, the University of Wisconsin has build additions to the stadium here and there such that the capacity now stands at a massive 80,321. Today, this place is one of the most lively venues in college football thanks in large part to the Wisconsin Marching Band’s raucous post-game party known as “The Fifth Quarter.” 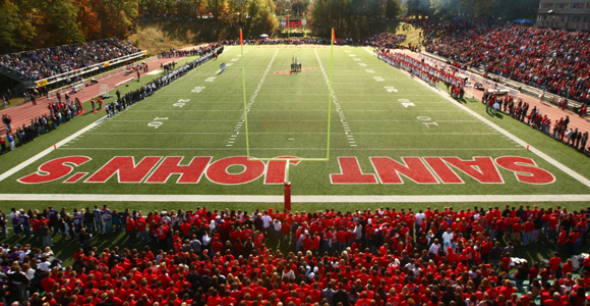 Okay, I know you internet people are probably scratching your heads (or perhaps screaming obscenities) at this pick, but please hear me out. College football is more that the big name schools. There are tons of small colleges playing Division III football whose fans are just as rabid as those at a BCS school. And among these Division III football madhouses, St. John’s University is like Penn State. Their coach, John Gagliardi, is the winningest college football coach of all time (480-131-11) and is one of only three active coaches in the College Football Hall of Fame. The others? Chris Ault of the Nevanda Wolf Pack and a little nobody named Joe Paterno of the Penn State Nittany Lions. The St. John’s University Johnnies play football in Clemens Stadium, also known as “the Natural Bowl” because it’s built in a natural amphitheater enveloped by pristine Minnesota pines. On game days, the quaint venue fills with about 10,000 fans and the smell of fresh baked “Johnny Bread” (baked weekly since 1895 by the Benedictine monks who run the school). In other words, this place is what you would get if Kevin Kostner made a Field of Dreams about football. Okay, now that you’ve heard me out, you may resume yelling obscenities. Source 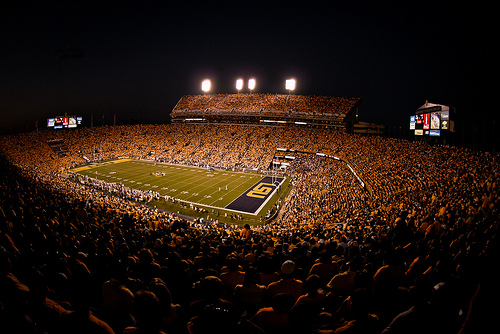 Any place nicknamed “Death Valley” has to be pretty nuts, right? LSU’s Tiger Stadium is on this list because there are few louder, wilder, or more intimidating venues in college football. Apparently, after you attend a game in Death Valley your ears ring like you were at a rock concert. Part of the reason for all the insanity must surely be the fact that the Tigers play mostly night games—meaning their fans have extra tailgating time to get all liquored up. Also, they really love their football down there in the bayou. 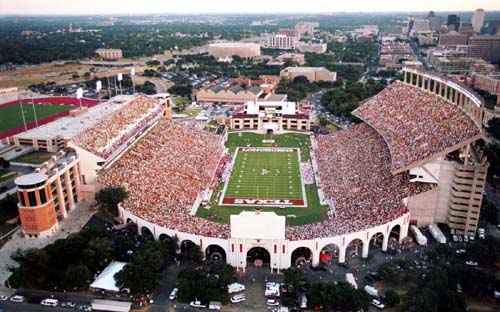 To be honest, there could probably be four or five Texas schools on this list. But for the sake of maintaining diversity, I went with just one: the home of the Texas Longhorns. They say everything is bigger in Texas, and their passion for football is certainly no exception. Everything you encounter at this stadium has a distinctly Lone Star feel, from the outfits worn by the marching band to the ritual unfurling of the largest Texas flag in the world. 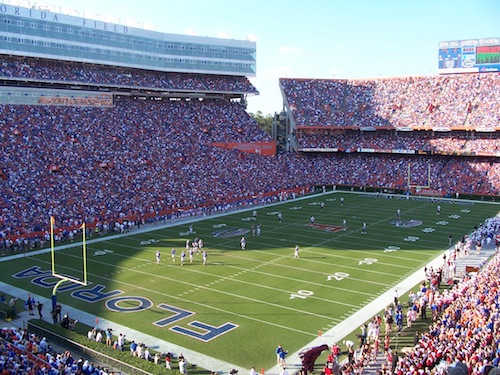 Officially named Ben Griffin Stadium, they call it The Swamp because, there, it’s always the gators who dominate. Of course, Florida being a member of the SEC, the passion of the fans needs little explication. So I’ll say only this: they’ve sold out every game for the last 30 years. As for the environs, as you can see from this picture, this place is probably the most intimate 88,548 seat stadium on the planet. With rabid fans practically right on top of them, it’s no wonder opposing teams fair so poorly here. 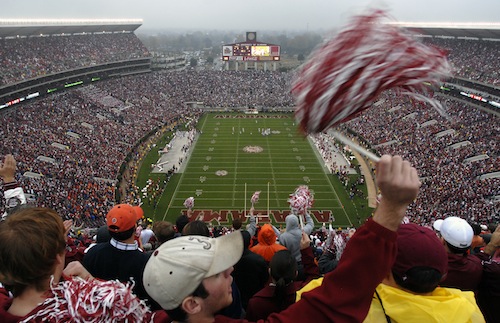 Opened in 1929, this stadium was originally just “Denny Stadium.” In 1975, however, the Alabama state legislature decided the stadium should also honor legendary Crimson Tide coach (winner of 6 national championships) Paul “Bear” Bryant. So now it’s the Bryant-Denny Stadium. Of course, the fact that the state government concerns itself with honoring football coaches ought to tell you something about the importance of football in Tuscaloosa, Alabama. Today, the stadium seats 101,821 people (every single one of whom puts the “fan” in “fanatic”), but is only the second-biggest stadium in the SEC. 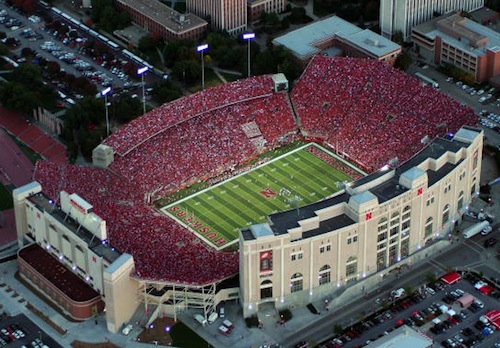 The Nebraska Cornhuskers have one of richest traditions in college football. Their Memorial Stadium opened back in 1923 and is named to honor Nebraskans who have served the nation in times of war. Classy, right? On game days, the stadium is subjected to a deluge of 80,000 fervent Nebraskans dressed entirely in red. They call this, strangely enough, the “Sea of Red.” Of course, all this sounds amazing, but good luck getting tickets. They’ve sold out every game since 1962. (Yes, that’s a record.) 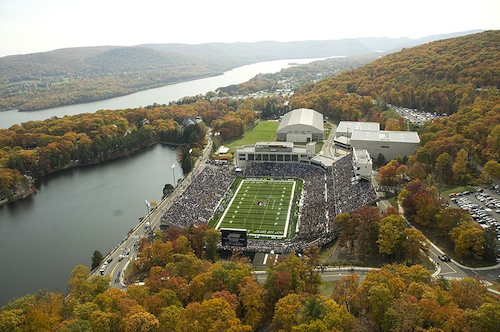 Army’s Michie Stadium is a hell of a lot smaller than most of the places we’ve seen so far. But it’s old, gorgeous, and overflowing with tradition, which is why it comes in at #4 on this list. This 38,000-set gem was built in 1924, designed to overlook the Hudson River and West Point’s picturesque neogothic campus. Combine this with about 4,000 men and women in sharp uniforms, and you’ve got yourself one hell of a place to watch college football. 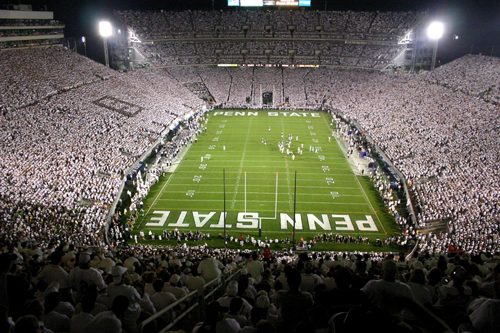 Beaver Stadium, opened in 1960, is the second-largest stadium in North America (after Michigan’s Big House) with a capacity of 106,572. But it’s not just a shrine to one of the nations greatest college football programs. It’s also a shrine to living legend, football idol, and one of the greatest coaches (of anything) ever: Joe Paterno. When he comes out before the game to great the student section, you’d think it was Santa Clause greeting a pack of sugared up 6-year-olds—that’s how big a deal JoePa is. Sadly, Joe aint gonna be around forever. Hopefully this place will still be magical after he’s gone. 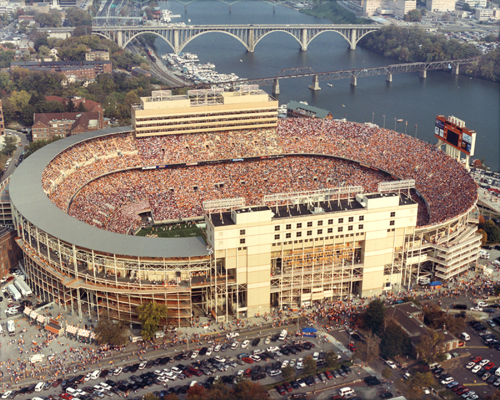 Opened originally in 1921, this 102,455-seat stadium located on the banks of the Tennessee River has one of the most picturesque locations in college football. And it’s not just home to a football team, but to one of the grandest football “experiences” anywhere. At least, that’s according to both the Sporting News and Sports Illustrated. Hey, if a stadium is an experience unto itself, that’s pretty good, right? Also, like Husky Stadium, people tailgate on boats outside Neyland Stadium, which (as I’ve said already) is ridiculously awesome. 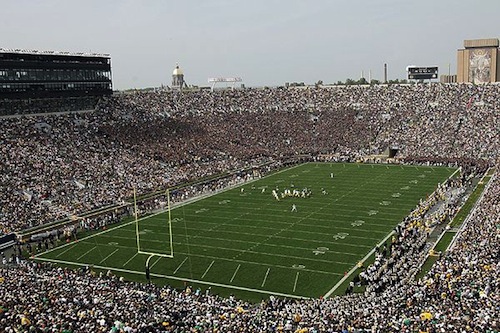 Let me make one thing perfectly clear: I am not a fan of Notre Dame. The Fighting Irish have been irrelevant for 20 damn years but people still act like they matter, and that bugs the crap out of me. That being said, Notre Dame used to be the greatest program in the country, and was perhaps the first college football team to have a truly national fan base. On top of that, they’re stadium was, is, and I suspect will continue to be absolutely beautiful. I have only walked around the outside of this place, but I’ve heard people say that this stadium is the Fenway of college football. From what I’ve seen, that sounds about right. Thus, I feel I have no other choice but admit that Notre Dame Stadium is probably the best place to watch college football.