11 Biggest Badasses In The History Of The Rugby World Cup 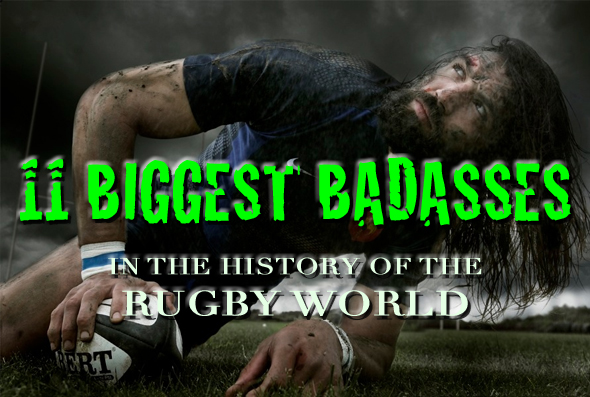 Originally, I thought I’d bring you a list of the greatest upsets in Rugby World Cup history for today. But as the group stage of the 2011 tournament draws to a close, the fact that the opening round matches have yielded precisely zero upsets thus far really took the wind out of those sails. Maybe the knockout stage will produce some surprises, but for now the topic of RWC upsets is dead to me. So I’ve decided to tack off in a different direction and do a list of something every world cup has in spades: badass dudes.

Now, they call these guys “hardmen” in Rugby circles. Basically, they’re the enforcer types you absolutely, positively, do not want to piss off. (Do not, for example, write an article for Total Pro Sports about how hot their wives and girlfriends are.)

Anyway, here’s the list: the 11 biggest badasses in Rugby World Cup History. Bust out the ibuprofen, because just watching these videos is going to give you a headache and a stiff back.

Jonny Wilkinson is a bit of a reach for “all-time great hardman” since his RWC career isn’t even over. (He’s on England’s roster right now.) But he’s generally recognized as one of the best fly-half/insider centers in the world. And man, can he pulverize an opponent. Check out this other clip, where he picks a guy up, flips him around, then smashes him to the ground:

South Africa Springbok Andre Venter was one of the hardest (and, often, nastiest) players in the World Cup from 1996 to 2001. Don’t believe me? Watch this video in which he subtly…uh…stomps on another guy’s face. Ouch.

Sadly, old Andre Venter has contracted a rare disease of the muscular system that has left him in a wheel chair.

They call this guy “The Munch” because he was such a wicked tackler, and in this clip we see the most famous hit of his career. It’s from the 1991 RWC quarterfinals against France. If you fast-forward to about 1:35, you’ll see Skinner crash into #8 Marc Cécillon of France, pick him up, and carried back about 10 yards. That one epic hit completely deflated the French attack and helped England hold out for a 19-10 victory.

Prop forward Richard Loe was called “The Enforcer” by his teammates. To opponents, who often found themselves at the losing end of elbows, cleats, and close lines, he was more commonly referred to as a thug. Either way, this dude (who played for New Zealand from 1987-1995) was one scary mother, and very deserving of this loving tribute video.

In 2003, Samoan hardman Brian Lima issued one of the most bone-crushing hits in the history of the RWC (and probably in the history of rugby in general) against South Africa’s Derick Hougaard. The initial hit comes at the 0:09 mark (not that you could miss it, what with the reaction of the commentators), and then is revisited around the 2:00 mark. Careful, just watching this clip may give you whiplash.

How badass was former England rugby captain (and current England rugby coach) Martin Johnson? The dude was willing to initiate a diplomatic crisis just to “set the tone” for a match against rivals, Ireland.

“What’s that? Move 10 feet to my right so the President of Ireland doesn’t have to walk on the wet grass? Bugger off!”

But if this kind of bull-headedness isn’t enough to satisfy you that Johnson was one tough bastard, how about some plain, old-fashioned on-field violence? Okay, here you go: 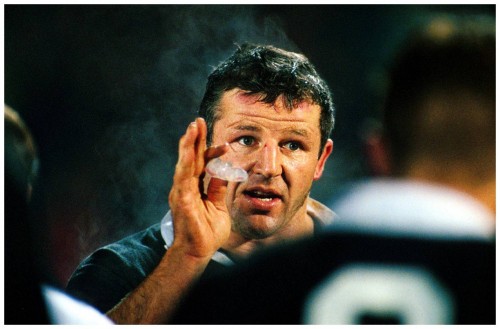 I couldn’t find a video that really did New Zealand’s Sean Fitzpatrick (active 1986-1997) justice, so I just went with this badass photo. However, that was him getting kicked in the face by Andre Venter in #10. And you exactly don’t see him rolling around on the ground for 10 minutes holding his face like a soccer player. So yeah, he was tough. Fitzpatrick is an icon in New Zealand, and considered one of the greatest All Blacks players of all time. Considering the amount of talent that comes out of that country, that’s saying something.

His name was Wayne, but he goes by Buck. He only played 22 international matches, but that was enough to cement his status as one of the hardest guys to ever play for New Zealand.

In a match against France in 1986, Buck incurred one of the most awful injuries any man could ever imagine: his scrotum was ripped open by a guy’s cleat. What did he do? Kept playing, obviously. Eventually he had the trainer stitch him up so he could return to the game.

He’d be #1 on this list for sure if that terrifying incident had actually occurred during a Rugby World Cup match.

Scott Gibbs just tackle a guy? No way. Tackle a guy, then give him a punch on the side of the head as he’s going down? Yeah, that’s what you could expect when you faced “Car Crash” Gibbs. (Skip to the 1:50 mark in the video to see what I’m talking about.)

Still, Gibbs (who played from 1986-1997) had more to give than just brute force. Check out this amazing try:

Bakkies Botha is regarded as one of the toughest and nastiest men to ever play the game. Like #11 Johnny Wilkinson, he is still active (playing right now for the Springboks). Unlike Johnny Wilkinson, Botha’s resume is so full of brutal incidents that he’s a no brainer for this list of the RWC’s ultimate badasses.

In his first ever international match, he got a yellow card for “stamping” (like, with your feet). Also, he’s served suspensions for eye-gouging Australian Brendan Cannon and head-butting New Zealander Jimmy Cowan—the latter of which occurred in July 2010 and is the highlight of the video presented here. So the point is: just stay clear of this guy if you can.

Coming in at #1 is yet another active player. Like the other two, he’s without question one of the biggest hardasses to ever step on the field.

To be sure, part of Sebastien Chabal’s mystique is his burly caveman appearance. But he’s also gargantuan, and has the brute force to back up his looks. I mean, it’s not like just anyone can get a montage of their top plays set to the score from Terminator. Plus, admit it: when you think of Frenchmen, you think of little Napoleon in his silly hat, or Albert Camus sitting at a sidewalk cafe, smoking and drinking coffee while writing in his journal. You don’t think of nightmarish guys like this. I mean come on, this dude is like some mythical beast, not a regular human being.

Anyway, here’s another clip, just to show you what he looks like at full-speed: