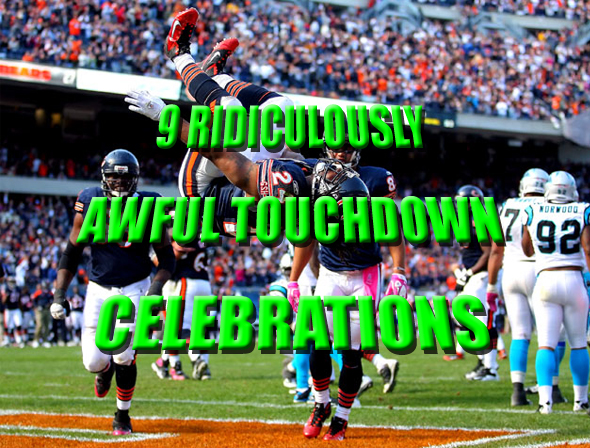 In recent years, the NFL has tried to come down hard on excessive touchdown celebrations. But really, aren’t these spectacles actually good for the league? Even if a guy is totally disrespecting his opponent, post-TD shenanigans generate publicity and keep people talking about football into the middle of the week.

Did you see the epic touchdown celebration FAIL by Marion Barber this past Sunday? In his first game back from injury, the guy scored a TD against the Carolina Panthers and was so elated he decided to do a backflip. Then he landed right on his face. On semi-national television.

Embarrassing for Barber, yes, but ridiculously entertaining for everyone else. So why would the NFL want to take this away from us?

Thankfully, while the NFL may deprive us of future celebrations, until someone finally invents a time machine, they can’t erase our memories of epic celebration flops from the days of yore. So in that spirit, I present to you a list of 11 ridiculously awful touchdown celebrations. Because it’s fun mocking the failure of others, isn’t it?

Who could forget this classic from September 15, 2008? Eagles rookie DeSean Jackson took a beautiful pass from Donavan McNabb for what would have been the first touchdown of his NFL career. Unfortunately, the guy was so eager to act like he was too cool to care about that first TD memento that he dropped the ball before he broke the plane of the end zone. Official ruling: 60 yard reception and a fumble. Nice start to your career, huh DeSean?

(PS, this won’t be Jackson’s final appearance on this list.)

They say that those who don’t understand history are doomed to repeat it. Well, apparently Aaron Dobson of the Marshall University Thundering Heard wasn’t watching that Eagles-Cowboys Monday Night Football game on September 15, 2008, because on September 10, 2010, Dobson makes a 96 yard reception in the first quarter against West Virginia, then drops the ball right before crossing the plane. Luckily for Dobson, this one went unnoticed, and the touchdown stood.

Okay, technically this isn’t a “touchdown” celebration. But it’s football, points were scored, and I’m the one writing this list. So I say it’s close enough. Also, it’s one of the most famous botched celebrations in the history of pro sports: Guy makes great play. Guy celebrates. Guy tears ACL, ruins his career.

Actually, this is kind of depressing. I need a drink.

This inexplicable touchdown celebration occurred just a couple weeks ago. After running a fumble back for a touchdown against the hapless St. Louis Rams, New York Giants linebacker Michael Boley did what any testosterone-fueled macho guy would do: he found a team intern and spiked the ball on his face. Actually, it was an accident, and Boley apologized. But I would rather pretend it was done with malice of forethought. (In fact, I pretend all things are done with malice of forethought. Makes life more spicy.)

I’m pretty sure this little maneuver, in addition to being painful and embarrassing, is actually illegal in Alabama. (I’ll have an intern check on that and get back to you. In the meantime, please move on to the next video highlight.)

Okay, here’s one that is definitely illegal in Alabama. (It’s okay in Arizona, just so long as you’ve got proof of citizenship.)

This Arizona Cardinals TD celebration was already pretty weird to begin with. But then the ref gets involved, and things get downright nasty. Cardinals defensive tackle Darnell Docket learns the hard way—and by “the hard way” I mean “from the fact that the ref gave him a reach-around”—that he shouldn’t ride his teammate like a horsey.

Well, I told you we’d see DeSean Jackson on this list again. This epic celebration catastrophe occurred during the 2004 high school football all-star game (a.k.a., “the U.S. Army All-American Bowl”). It pretty much explains why he went to Sacramento State and not, say, Ohio State, despite being the #1 high school recruit in the country. And it also helps explain why he wasn’t drafted until the second round of the 2008 NFL draft: teams thought he might have “character problems.” Yeah, I guess.

Here’s a look at the botched celebration from another angle:

Who would have thought the worst touchdown celebration of all time didn’t even happen in America?

Meet Kerwin Bell, ladies and gentlemen, former quarterback for the CFL’s Toronto Argonauts in 1998 and again from 2000-2001. The guy actually had some great years with the Argos, and even got to play in one NFL game in which he completed 5 of 5 passes for 75 yards and a touchdown. Sadly, all anyone will ever remember him for is that time he spiked the ball right into his own nads. I guess nobody told him that astroturf is really bouncy.