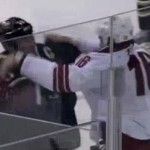 Last year we introduced you to our daily segment titled “Frozen Fisticuffs Fight of the Night,” where we showcase the best fight on the ice from the previous night of hockey action.  The 2010-11 season provided us with some spectacular bouts, as Cam Janssen walked away with “Fighter of the Year” honors, while he and Krys Barch provided us with the “Fight of the Year” back on January 2, 2011.

With the 2011-12 NHL season now underway, we are set to resume handing out our “Frozen Fisticuffs Fight of the Night” award.  Being the only two players to drop their gloves last night, Brendan Morrow of the Dallas Stars and Rostislav Klesla of the Phoenix Coyotes are the first to be honored with the award for their fight on Monday, October 10, 2011.

Here is their bout.