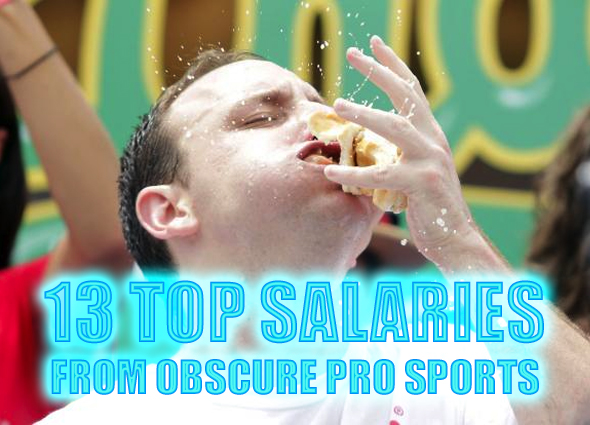 UPDATE: Obscure sports like underwater sword fighting and upside-down kickboxing continue to be very low earners for their participants (they do it for love of the sport), but there are a few lower-tier sports that earn big bank for a lucky select few. So a couple of bonus entries on this list are called for, showing a couple of high earners in some of these sports in the last two years. Volcano boarding still doesn’t pay, though, probably because of the lack of big corporate sponsorships. And the lava.

Last week, Total Pro Sports brought you a list of the highest athlete salaries in 2011. Not surprisingly, all the top salaries came from only four of the world’s most popular pro sports—boxing, baseball, basketball, and auto racing. But this left me wondering: what about the lesser known pro sports?

So, I did a little digging, and today I have for you a list of the top salaries of obscure pro sports. However, I didn’t order this list simply according to the size of the salary. That would be kind of boring when talking about sports you didn’t even know people get paid to play.

Instead, I’ve ranked the entries on this list according to the disparity between the size of the salary and the obscurity of the sport. Which is just a fancier way of saying, I ranked them according to how surprised I was by the size of their salary, given the sport they play. So my methods, as always, are pretty scientific. 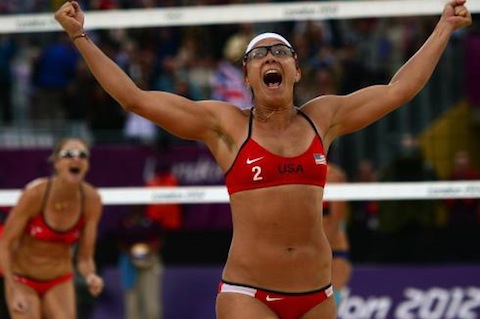 Misty May-Treanor is the closest thing that beach volleyball has to a breakout star, and she’s got the salary to prove it, having earned over $2.1 million in a single year. As you’ll see below, that’s a lot more than her well-compensated male counterparts, which makes beach volleyball one of the only areas where women are better paid than men! 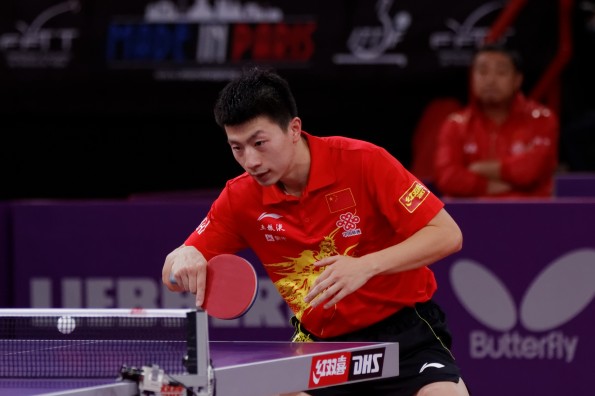 $250,000 might not seem like a lot, even by the standards of obscure sports, but when you consider that Ma Long earned a little over that in 2013 doing something most of us did in rec rooms and basements when we were kids. 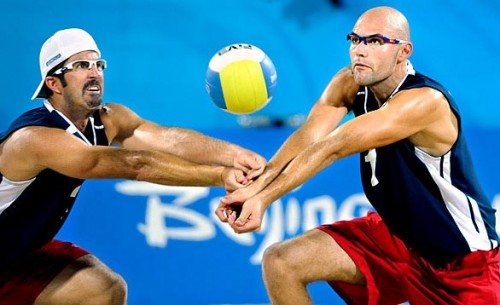 Beach Volleyball isn’t that obscure. It’s always one of the most popular events at the Summer Olympics (though, the bikini-clad women are the bigger draw). Still, it’s not particularly popular as a pro sport. You might catch a tournament here or there on ESPN 2 at 11AM on a Wednesday, but that’s about it. And yet American duo managed to pull in over three-hundred grand last year. That’s almost as much as the minimum salary for a Major League Baseball player! 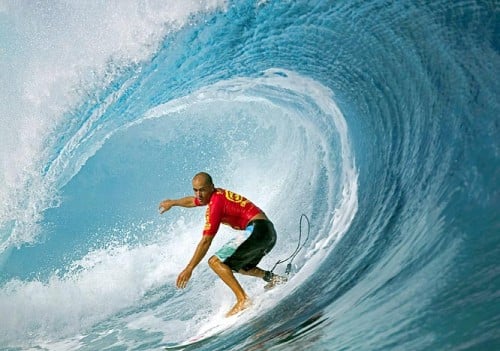 Just so we’re clear, Florida native Kelly Slater is a dude. A surfer dude, to be precise. And he’s doing well for himself. In fact, half a million is just about what I would have expected for the top pro surfer, which is why Kelly only ranks #12 on this list. He also makes a good chunk of change on endorsements and has a super hot girlfriend. So it definitely wouldn’t suck to be Kelly Slater these days. (Plus, do you get to see stuff like this when you go to work?) 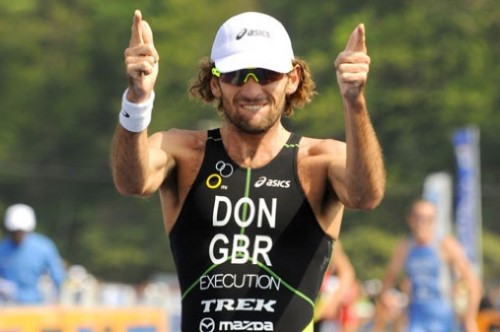 This one is kind of mysterious. British triathlete Tim Don has never been ranked higher than #3 in the world, and he did that only once. In 2010 he finished 15th, and yet somehow he on top of the money list with over two-hundred grand. I guess he won the events with the biggest purses. Still, doesn’t really seem fair, does it? 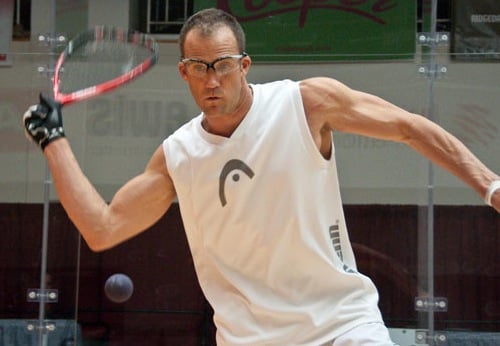 Where, exactly, is professional racquetball a popular sport? I assumed maybe in Europe or Asia, but all of the major events seem to be held in North America. That includes the most prestigious event, the U.S. Open, which is held in Minneapolis.

In any case, Canadian Kane Waselenchuk is the top-earning racquetball player in the world these days, pulling in a decent $300,000. (This figure, unlike the others presented here, is actually the sum of his winnings, appearance fees, and endorsements. So Waselenchuk’s salary is probably more like $150,000-$200,000.) 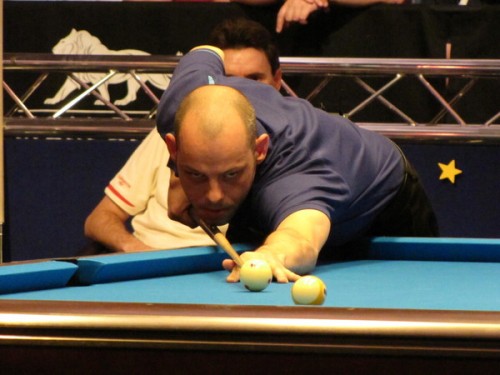 With many or most of the sports on this list, it would almost seem like a waste to put so much hard work and effort into earning such paltry salaries. Sure, you can make $500,000 surfing, but how much of that do you have to spend on travel and other expenses? A whole lot, I’m guessing. And then one day you’ll be too old to make money surfing, and what will you have? (Sorry, Kelly Slater.)

But with billiards it’s different. You can afford to make only $118,494 because the expenses are low relative to other sports, and you can be competitive well into your 50s or 60s (as long as you don’t get early onset arthritis). So Darren Appleton here might be okay. 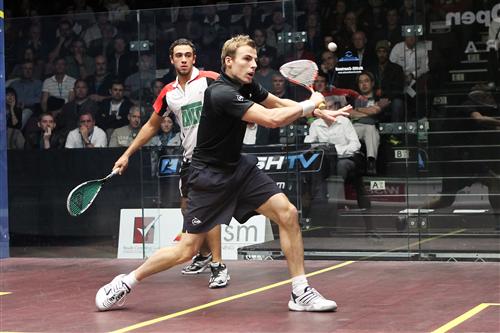 I thought squash was just some game that rich people played as “the club.” I had no idea there was a Professional Squash Association (PSA) and a Women’s International Squash Players Association (WISPA). But there is. And ss top dog Nick Matthew shows, you can’t count of squash to make you rich. So I guess you’d better be playing for the love of the game. 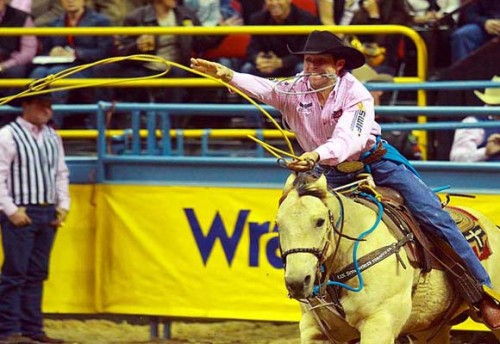 I think I expected the top-earners from the world of Rodeo to earn a little more than this. The sport is pretty popular in certain regions (like Texas and Calgary), and the costs involved—well-bred horses and lots and lots of cattle—are pretty high. How much of that $507,920 does Texan Trevor Brazile get to put in the bank at the end of the year? 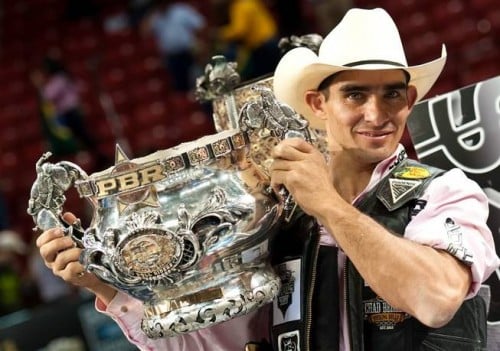 For most people, bull riding is a bit of a novelty. You see people do it on TV, or you hear about bars that have mechanical bull contests, but you kind of forget that this is an actual sport people pay money to watch. So that’s why bull riding ranks to high on the list. It’s certainly not because Brazilian Renato Nunes didn’t earn every penny of that $1.5 million. He most definitely did. 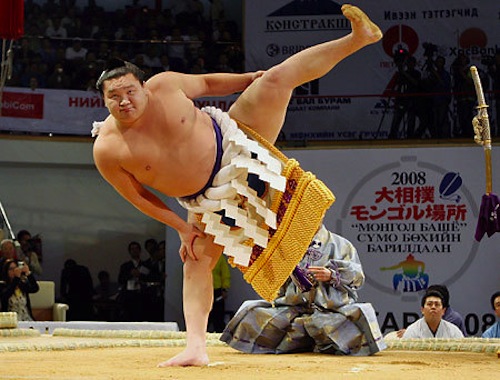 See, now I thought the top-earning Sumo wrestler would make a hell of a lot more money that this. Though it’s totally a novelty here (like Rodeo), isn’t Sumo kind of a big deal in Japan? You’d think the top sumo wrestler could at least clear $1,000,000. After all, the average salary of a baseball player in Japan is about $450,000. And if they paid them more, maybe Sumo wrestlers wouldn’t have to resort to stealing ATMs. 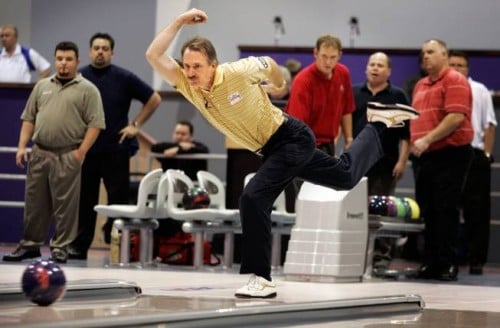 Given how much bowling is on TV compared to some of the other sports on this list (like Triathalon), I expected the top-earning pro bowler to be pulling down at least a quarter million, but probably something more along the lines of half a million. Now, I’m sure Walter Ray also has a solid income from endorsements; nevertheless, his actually salary seems shockingly low to me. 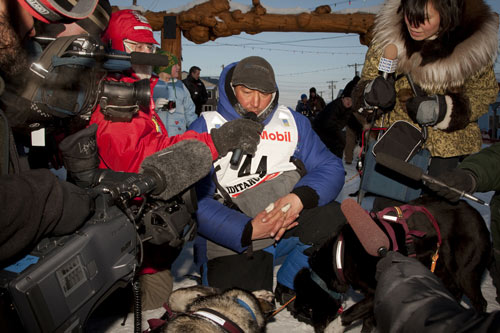 On the one hand, it’s rather amazing that you can make any kind of living on dog sledding. Everyone’s heard of the Iditarod, but no one knows when it is or who the hell has won it. On the other hand, it’s hard to believe people can afford to compete professionally when making only $50,000 a year.

Then again, all the competitions take place in Alaska and northern Canada, so the travel expenses would be relatively low. And you can probably get sponsors to give you dog food, so that takes care of another $10,000 in expenses. So given the low cost of living in the regions where these folks live, I guess they can get by pretty well on fifty grand. 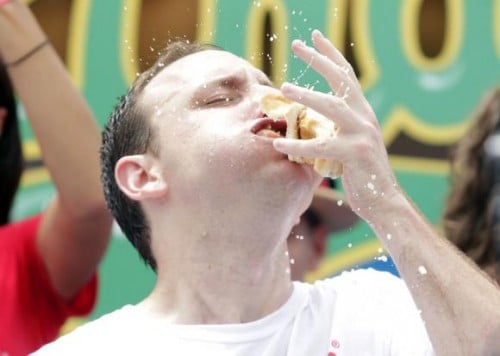 Is competitive eating a sport? My instinct says not, but ESPN says yes. And who am I to argue with ESPN?

In any case, I was absolutely shocked to learn than you can make this much money by making a complete ass out of yourself on a regular basis. But hey, whatever floats your boat, Joey Chestnut. 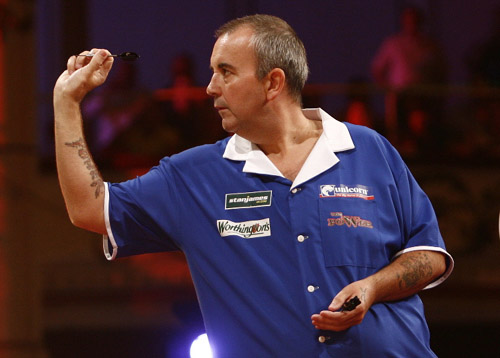 British darts champ Phil Taylor made a million bucks in 2010. That just blows my mind. Who knew spending too much time at the pub could become so lucrative?