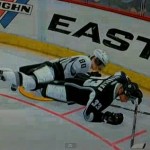 Every year EA Sports has quite the difficult task, as they attempt to bring every hockey fan closer to their fantasy of laying in the NHL but creating as realistic a video game as they possible can.  They have done a great job of accomplishing such a feat, as the graphics and game-play of the newly released NHL 12 is enough to make gamers feel as though they can  control whichever professional hockey team they choose.

But even with all of the sexual innuendos that are present within the game of hockey, I doubt any of us will ever see the following take place during an NHL game.