I’m not really sure what gave me the idea to do a list of the hottest female pro cyclists out there. Maybe it’s just because hottest female anything always goes over well. Maybe it was something I saw on TV. Or maybe I saw a hot girl riding a bike on my way to work and the image planted a seed in my brain. Regardless, after doing a bit of “research,” the one thing I do know is this: I don’t watch nearly enough women’s pro cycling. These women are insanely talented and (more importantly for our purposes here) insanely hot.

Check out this list of sexy cyclists, and you too may discover that you’re a pretty big fan of women’s cycling. 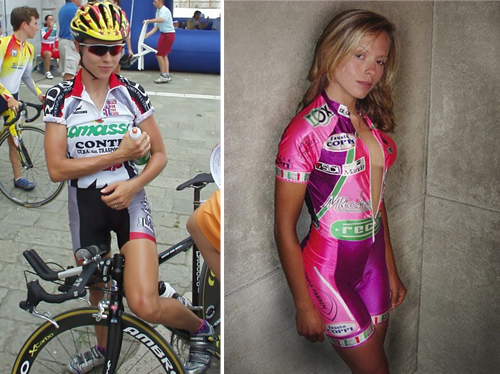 Lynn Gaggioli has been turning heads (because of her cycling and her attractiveness) since she burst onto the pro cycling scene back in 2003. For obvious reasons, there was a time that Lynn thought she might be a model. Personally, I’m glad she went with cycling. I don’t know what it is, but it just seems like she wouldn’t be as hot if she were just some boring model. 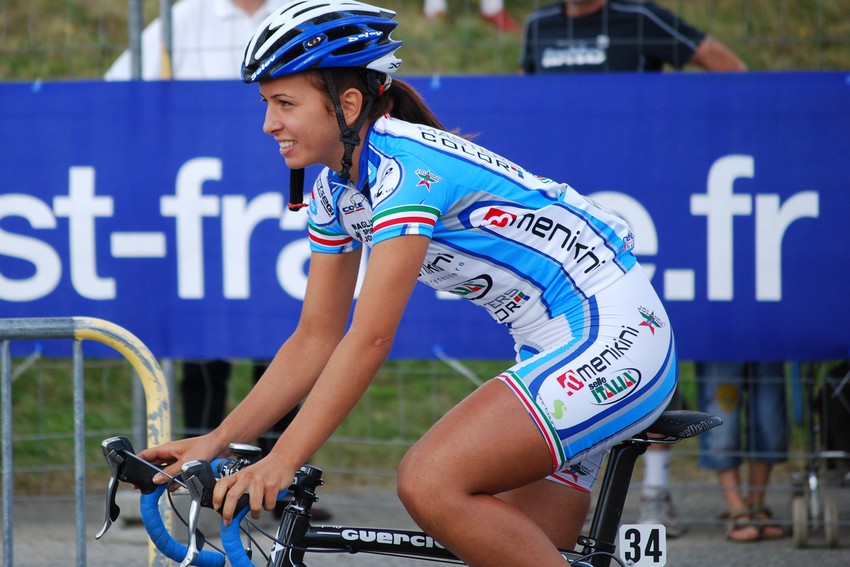 I was going to tell you that 22-year-old Giada Borgato here was a member of the mighty Colavita Forno d’Asolo pro cycling team. Then I googled “Colavita Forno a’Aslo” and discovered that the team just announced on Monday that it is folding. So I guess that makes this Italian hottie a free agent. (Note: I suspect Ms. Borgato belongs a little higher on this list. She’s Italian and, well, look at her. But since I’m a stickler about hard evidence, and since this is the best picture I could find—and it’s still pretty good—she’ll have to settle for #8.) 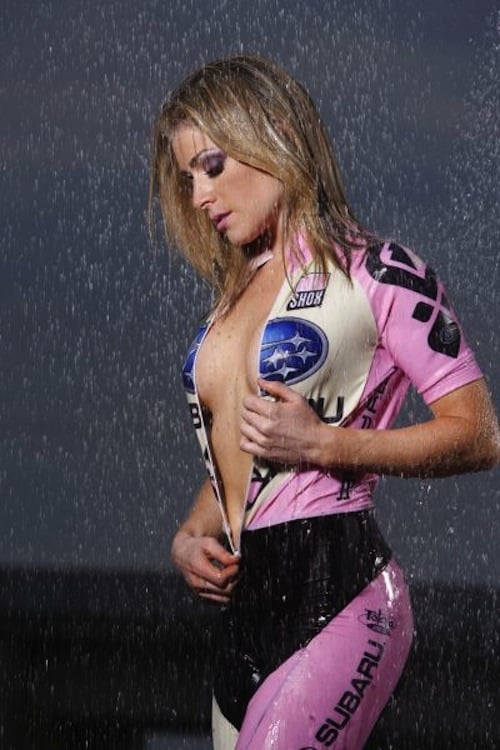 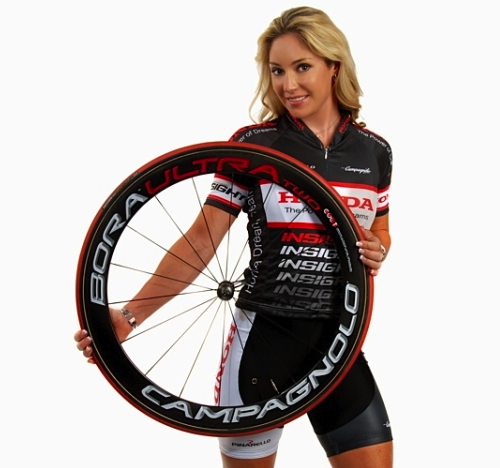 Rochelle splits her time between the road circuit and the track World Cup. Currently, this 29-year-old Australian hottie is a member of the “Honda Dream Team.”

Sounds like a pretentious name for a cycling team to me. I say if your dream team doesn’t have Larry Bird, Magic Johnson, and Michael Jordan, it aint that special. But what do I know. 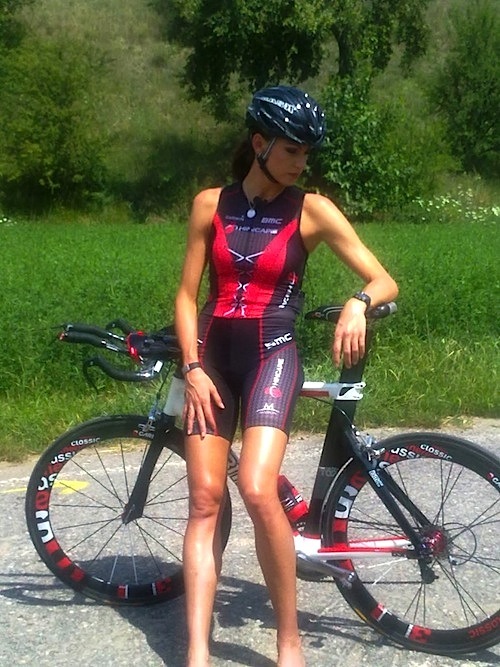 I was a little hesitant to include Jenny Fletcher on this list. Not because she isn’t super hot, because she is. No, I was hesitant because on her website she describes her as a “model/triathlete.” Because it's like, “Which is it lady? Are you a model, or a triathlete?”

But, despite my skepticism, it turns out she really is both. Fletcher has been modeling since she was 15, and she became a pro triathlete in 2010. And since she gets paid to ride a bike for 1/3 of a race, that makes her a pro cyclist. A really hot pro cyclist. 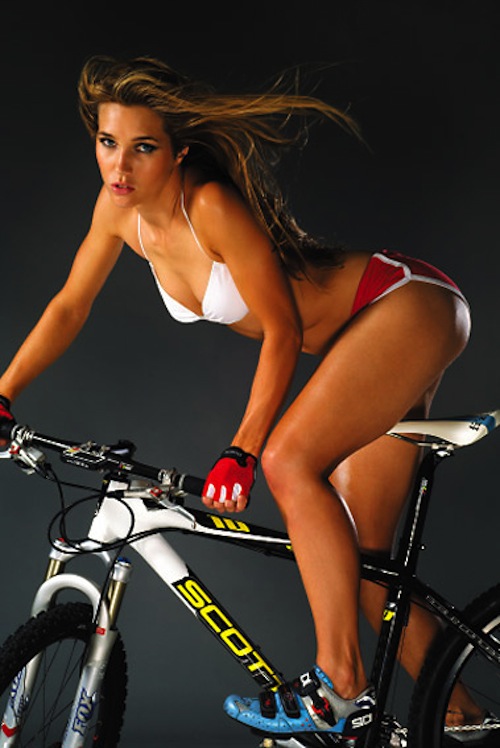 Niki here hails from Australia. She’s 33 years old, and she competes in both downhill and cross country pro mountain biking. Oh, and obviously, she is also a model. FHM Australia named her one of the 100 sexiest women in the world every year from 2002-06. (I guess she started going downhill at age 28.) I don’t know if she is or ever was one of the 100 hottest women in the world—FHM Australia may be a little biased—but I’d still take her. 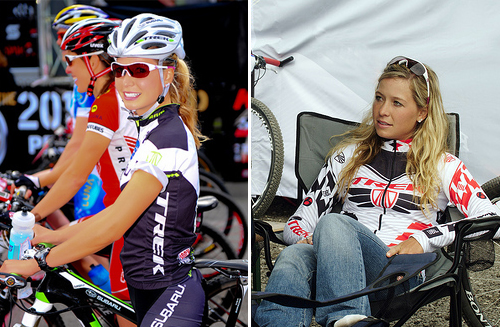 Emily Batty is the first pro cyclist on this list who has a website that doesn’t make her look like a total tool. The 23-year-old pro mountain biker simply says, “I Started riding bikes with family for leisure, then it turned into racing, racing led to my passion, and now its my career. Follow me in the chase for my dreams. Every goal I can imagine I want to achieve, I can’t do it on my own.”

Cute, right? And despite her all-American girl nextdoor looks, Batty is from Brooklin, Ontario. That makes her the hottest Canadian female pro cyclist. 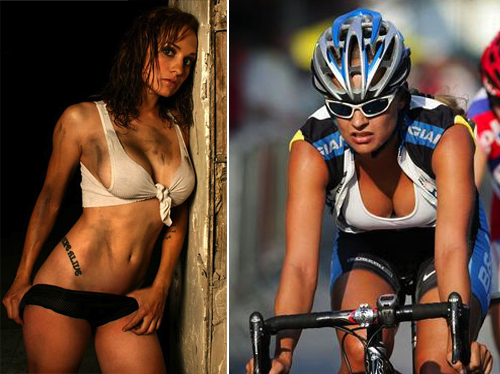 For some reason, some weirdo decided they should delete Liz Hatch’s wikipedia entry. Since no one objected within 7 days after the deletion was proposed, the page got cut. So the question is, why in the hell would someone not think this woman is noteworthy? She is a professional athlete who has appeared in the illustrious pages of Maxim. Maxim!

Even more surprising than the fact that someone cut Liz Hatch’s wikipedia entry is the fact that I can’t find up-to-date info on this woman anywhere on the web. Everything I come across is at least 2 years old. So if you have any info—like what team this beauty currently rides for—please, I’m all ears.

In any case, Liz is 30 years old and hails from America. That makes her the hottest American female pro cyclist. 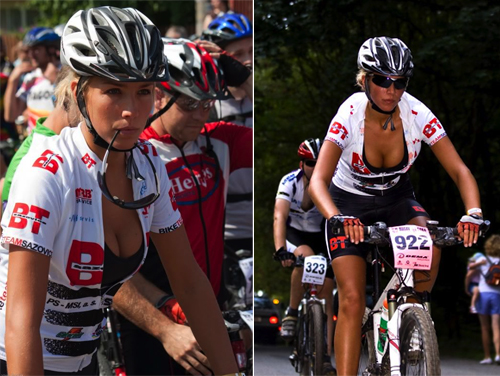 What makes this pro mountain biker from the Czech Republic the hottest cyclist in the world?

Fine. It’s her incredible rack. Her face is gorgeous too, but the boobs are what really sets her apart from the rest.