>Total Pro Sports
More
11 Most Expensive Stadiums In The World

11 Most Expensive Stadiums In The World 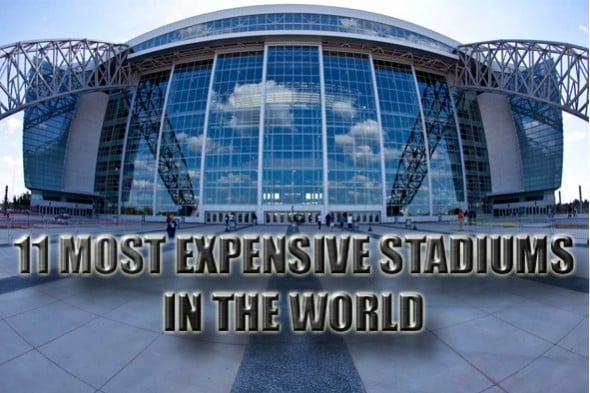 UPDATE: Contrary to what many economists predicted back in 2011, stadiums have only continued to get more and more expensive as audiences grow and lawmakers and sports executives get more adventurous. To cover this trend, we’ve added a couple of bonus entries to the list below, which will give you an idea of how stadiums have continued to increase in price (and, some would say, value) even in such a short time.

For a long time, stadiums were all function and no form. All any team was trying to do was fit as many paying customers as possible around the field of play. If you had asked the designers of Wrigley Field, for example, what “amenities” they planned to include in the stadium, they might have said, “well, there will be over 6 toilets!”

Today, things are quite different. Stadiums are supposed to be visually striking while also providing spectators with constant entertainment and about 500 different ways to spend their hard-earned money. Consequently, stadiums have gotten a lot more expensive.

For today’s list, we bring you the 11 most expensive stadiums in the world. But we’re not just ranking venues according to their original price tag. If we did that, the whole list would just be made up of the 11 most recently completed stadiums. Instead, we’ve adjusted the original costs of the world’s most expensive stadiums for inflation, thus giving a better idea of the real cost of these places.

Most of the entries here won’t surprise you. But a few might.

This year’s FIFA World Cup was the impetus for this new version of a longstanding soccer stadium in Brazil. It will also be home to some soccer games during the upcoming 2016 Summer Olympics, but despite its high cost it’s reportedly in need of a few repairs – controversy erupted recently over the realization that the roof was leaking!

The Barclays Center in Brooklyn, New York was a controversial project thanks in 2012 in part due to its $1 billion construction cost. But the new home of the Brooklyn Nets is a lot more than just a basketball stadium, playing host to a variety of music events, including its opening – a concert from famous Nets fan Jay Z. 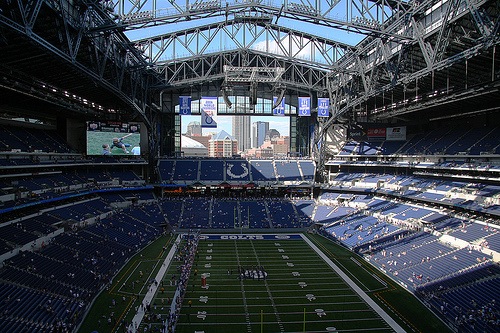 You probably wouldn’t expect to find one of the most expensive stadiums in the world in Indianapolis, but that’s were you’ll find this $735 million venue. It’s the current home of the Indianapolis Colts and it opened in 2008. The reason for the insane price tag? The retro field house architecture (even when they’re watching football, those Hoosiers get basketball out of their heads) and the monstrous retractable roof. 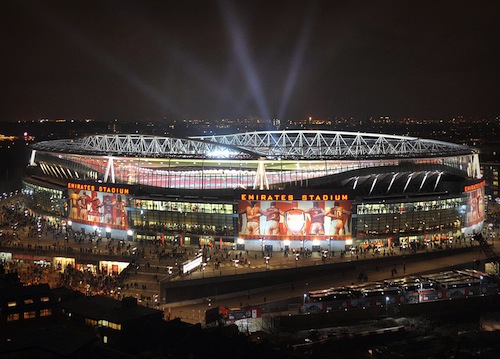 Home to one of the world’s most famous and valuable soccer clubs—Arsenal F.C.—Emirates stadium was completed in 2006 at a final cost of £390 million. Converted and adjusted for inflation, that’s about $750 million today. This place is somewhat of a rarity in the English Premier League in that it is brand spanking new. Most of the other top clubs have modern facilities, but they came about as the result of continual “renovations” (like Man U’s Old Trafford) rather than the construction of an entirely new structure. 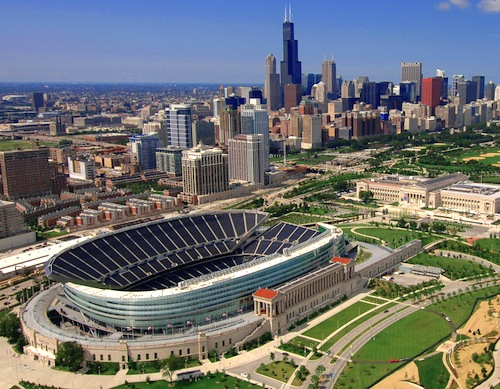 Whether or not the current Soldier Field constitutes a “renovation” depends on your perspective. One could argue that, since they kept the original 1924 facade with its distinctive neoclassical columns, the stadium was simply renovated. However, one could also argue that, since they no longer use any part of the original seating, what we really have here is just a brand new stadium built inside an existing stadium. (And this one would be my argument. Since 2003, it’s looked like a space ship landed inside the old stadium. A $755 million space ship.) 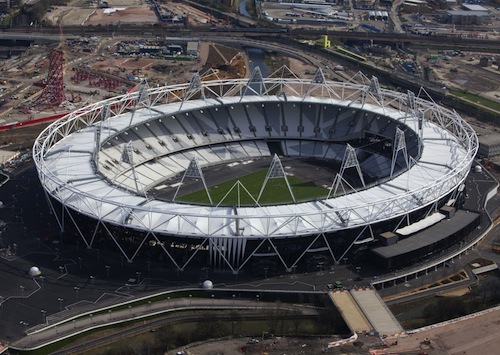 This 80,000 seat stadium was built for the 2012 Sumer Olympics at a cost of £486 million, which comes to about $775 million. That’s an awful lot of money for a stadium that will have absolutely no use once the Olympics are over. The London Olympic Committee has been trying to get somebody, anybody to agree to buy the thing when the games are over. Premier League clubs Tottenham Hotspur and West Ham United expressed interest, but their deals both fell through. Now the Olympic committee may be begging a lower level English soccer team to become tenants—not the typical fate of a three-quarters-of-a-billion dollar stadium. 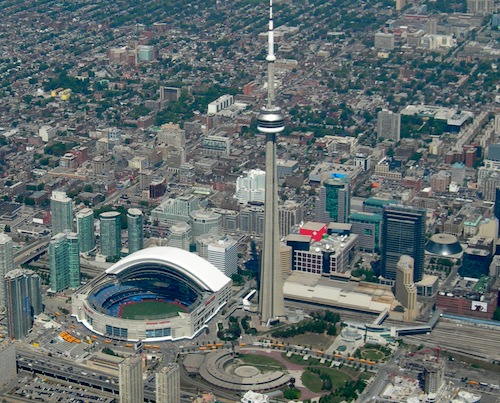 The original price tag of the Rogers Centre (formerly, and preferably, the SkyDome) was a whopping $570 million back in 1989. Today, with inflation, that comes to $914 million. The reason for the high cost is the stadium’s fully retractable motorized roof—an absolute must if you plan on playing baseball in Toronto in April. Now there are a number of stadiums with retractable roofs, but the SkyDo—er, Rogers Centre—was the first. 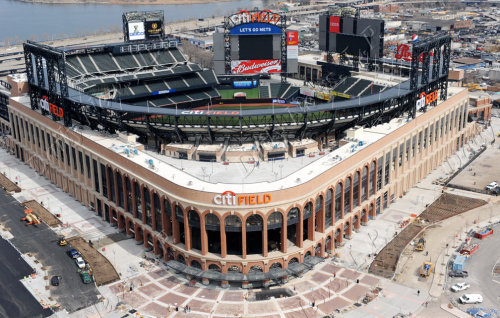 Why does a 41,000-seat stadium (opened in 2009) need to cost almost a billion bucks? All the luxurious amenities, of course—like the wiffleball field out behind center field that’s an exact miniature replica of the stadium, and the copious amounts of gourmet food options. Also, it’s in New York. Well, okay, Queens. But it’s still a pretty pricy place. 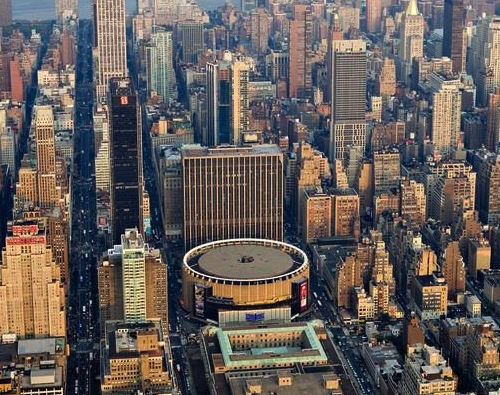 Madison Square Garden opened in 1968, which makes it the oldest venue in both the NBA and NHL. The final cost of construction was $123 million, which is $776 million dollars in 2011. That figure alone would put MSG at #8 on this list. However, we’ve also included in the Garden’s cost the $322 million renovation completed in 1991, which added 82 luxury suites. That brings the total to $1.1 billion. And pretty soon the cost of this historic sports and music venue will shoot even higher into the stratosphere, as MSG is currently undergoing another 3-year, $800 million renovation. 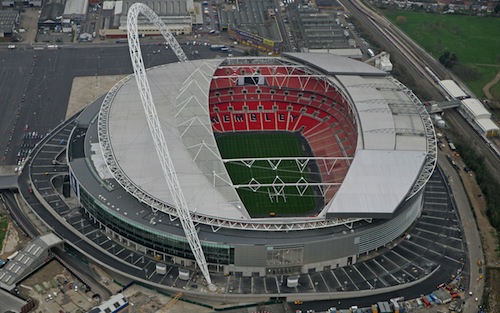 The 2007 version of Wembley Stadium has a retractable roof supported by the massive “Wembley Arch,” which rises 40 stories in the air and has a span of 1,000 feet. The thing is a marvel of modern engineering, and is pretty much all you need to know to understand why this 90,000 stadium (home to England’s national soccer team) cost $1.25 billion to build. 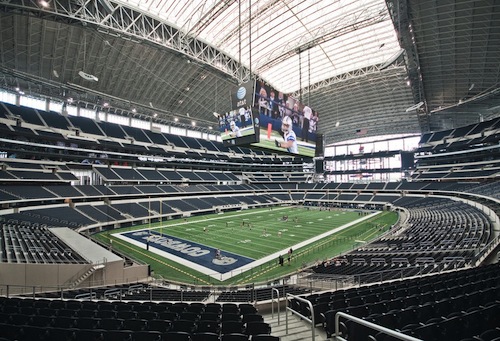 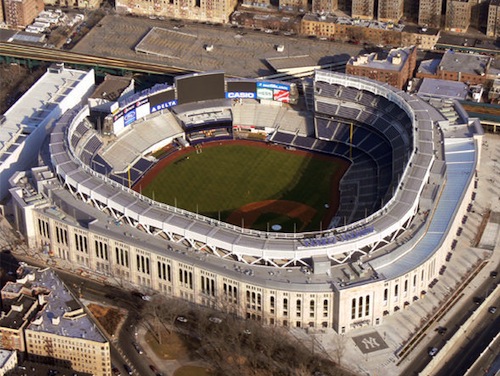 If the old Yankee Stadium was the House that Ruth Built, then the new Yankee Stadium would have to be the House that George Built—George being late Yankees owner George Steinbrenner, of course. He bought the Yankees for $8.7 million back in 1973, which today would be about $45 million. Obviously, the Yankees are worth a hell of a lot more than $45 million today—like, $1.25 billion more. With that kind of return on his original investment, it’s no wonder the guy decided to build his team a $1.5 billion shrine. 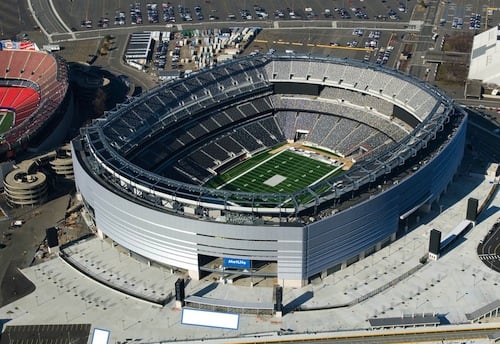 The New York Jets spent 26 years as tenants of the New York Giants in the old Giant Stadium. But finally, in 2010, the New York Jets became equal partners with the Giants in the ownership of the brand new 80,000 MetLife Stadium (a.k.a. the New Meadowlands Stadium). At an incredible $1.6 billion, this is the most expensive stadium in the world—though at least the cost was shared by two teams instead of just one or, worse, the taxpayers of New Jersey.