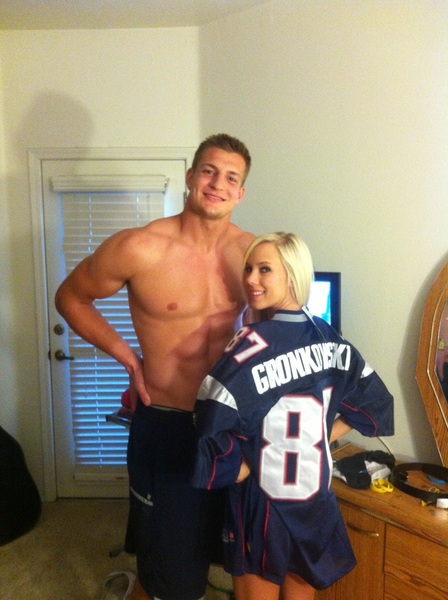 In fact, they created such a big stir that Gronkowski has since felt the need to apologize to Patriots owner Robert Kraft and explain himself to the media.

“I mean, I didn’t intend anything to hurt the reputation of anyone on the New England Patriots or on behalf of (team owner) Robert Kraft,” Gronkowski said, according to The Associated Press. ”It was a simple picture. That’s all. I’m here now. I’m here to talk about the Pittsburgh Steelers and the big game this weekend.”

I, for one, do not understand the need for an apology or explanation. The man has 401 receiving yards and five touchdowns on the season and he was simply enjoying a much-deserved bye week. Is he not allowed to hang out and take PG-rated photos with pron stars? Bibi is human after all. Perhaps she is a big Patriots fan and always wanted a photo with one of her favorite Pats players. Does her line of work mean she should be treated like a parasite by any athlete who does not want to face the media’s scrutiny?

At the end of the day, the image was harmless and it did nothing more than create an interesting story that had a few fans believe Gronkowski could land on the IR with a season-ending STD (he has since claimed that he did not sleep with her).  No damage was done and perhaps the best way for Gronkowski to silence his critics is to have himself another three-touchdown performance, like he did during last year’s game against the Pittsburgh Steelers.