Today marks the 52nd anniversary of one of the most iconic artifacts in professional sports: the hockey goalie mask. On November 1, 1959, in a game against the Rangers at Madison Square Garden, legendary Montreal Canadiens netminder Jacques Plante became the first goalie in the NHL to wear a mask that entirely covered his face.

The purpose, of course, was to protect his face from flying chunks of frozen rubber. However, it also just so happened that the mask made Plante look absolutely terrifying. So it wasn’t long before other NHL goalies picked up on this and started getting creative with their mask designs as a way of intimidating opponents. Today’s goalie masks aren’t really masks, but helmets. Yet, thankfully, goalies have maintained the tradition of painting terrifying images on their protective gear.

In honor of this awesome tradition—and since the Halloween spirit is still in the air—today we take a look at the 12 scariest hockey masks in the history of the NHL. Enjoy! 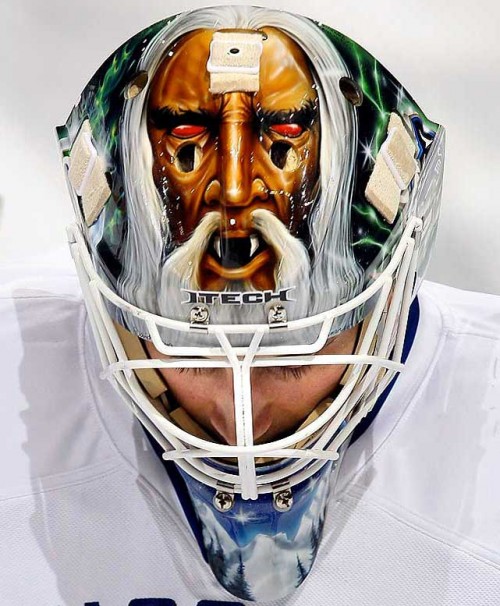 Curtis Sanford hasn’t really had what you would call an illustrious NHL career. He’s spent parts of 6 seasons as the backup goalie for the Blues, Canucks, and now the Blue Jackets. However, despite his anonymity in game logs over the past decade, the guy will at least be remembered for having one of the creepiest goalies masks of all time. (The guy on this thing looks like a cross between a vampire and the White Wizard from Lord of the Rings, doesn’t he?) 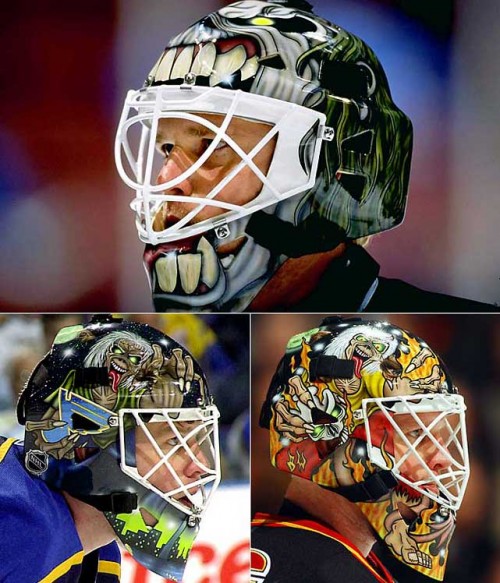 In his 8-year NHL career with the Stars, Blues, and Flames, Roman Turek had a handful of creepy masks—and all with a similar theme and style. In this collage, the top photo from his days with Dallas (1996-99) takes the cake. But the others are also pretty damn disturbing. 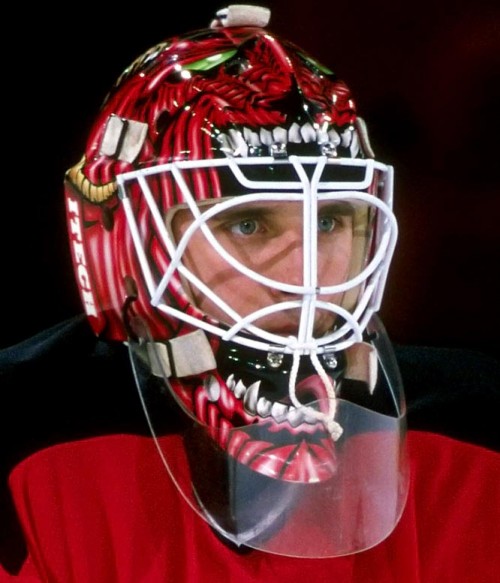 Being a backup goalie for Martin Brodeur (which Dunham was from 1996-98) is a pretty thankless task. You’re only going to play in games that don’t mean much, and there’s no way you can possibly live up to that guy’s standards. But like Curtis Sandord, Mike Dunham made his mark with an awesomely wicked mask. Of course, you have to wonder why every New Jersey Devils goalie doesn’t go with a satanic goalie mask. Isn’t that kind of a no-brainer? 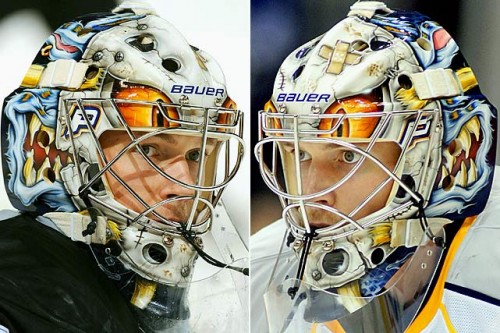 In addition to being one of the NHL’s top goalies in 2011, Nashville’s Pekka Rinne also has one of the league’s most twisted masks. What’s unique about his is that it manages to be cartoonish without loosing any of its creepiness. Actually, the more I think about it, I think the cartoonishness might be what makes it so creepy to begin with. 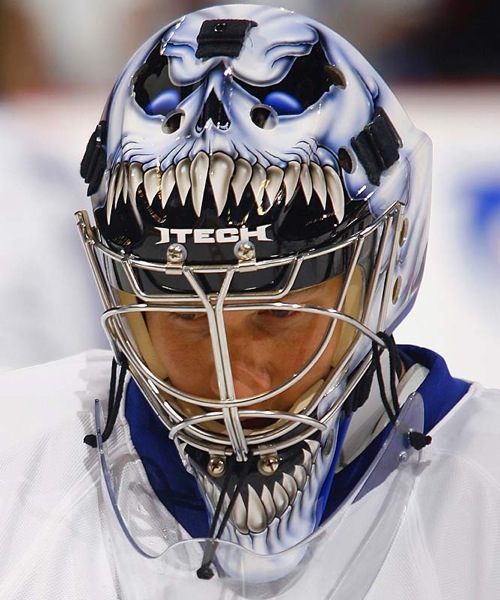 Poor Vesa Toskala may have been a washout as one of the Maple Leafs’ many goalie experiments in recent years. In January of 2010, the Leafs traded their former #1 goalie to Anaheim for J.S. Giguere, but Toskala didn’t even appear in a game for the Ducks before being traded to Calgary for another goalie on this list (#4). But even though Toskala couldn’t establish himself as a #1 goalie in the NHL, at least he can take solace in the fact that he made this list of all-time scariest hockey masks. Congratulations, Vesa! 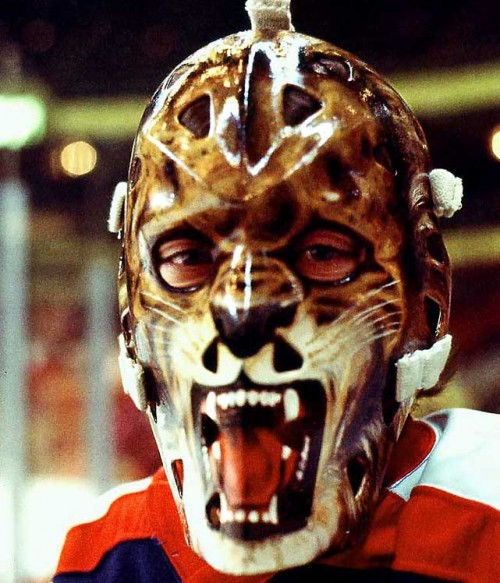 Gilles Gratton was one of those guys who helped give goalies a reputation for being “eccentric.” However, if it weren’t for his colorful personality and extremely fearsome lion mask, it’s likely no one would remember this guy. I mean, he spend all of 2 seasons in the NHL, appearing in 6 games with the Blues and 41 games with the Rangers between 1975 and 1977. 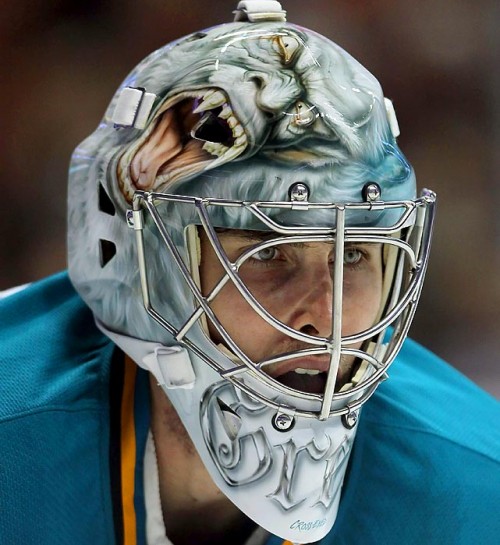 Thomas Greiss is currently the backup goalie for the San Jose Sharks. Are you beginning to notice a trend? So far, most of the goalies with scariest masks on this list have been backups. I’m not sure if it’s just that they have more time to think up scary masks, or that they make their masks scarier in order to stand out a little more. But there is definitely a pattern. As for Greiss’ mask, I’m not really sure what you would call that pasty creature. But I know it’s probably going to give me nightmares. 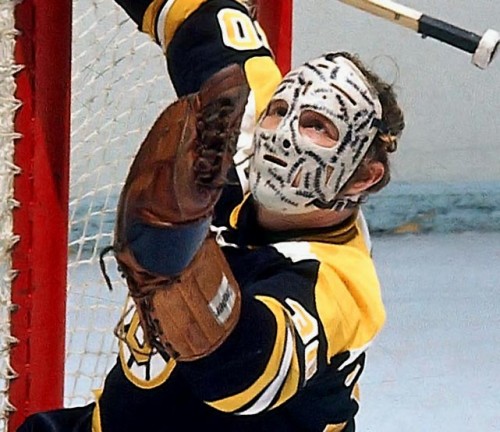 Finally! We get into the top 5, and we get our first mask from a Hall of Famer. Cheevers played two stints with the Boston Bruins in his career, backstopping them to Stanley Cup victories in 1970 and 1972. Nevertheless, Cheevers is just as famous for his iconic mask as he is for his stellar play—perhaps more so. Every time a puck his him in the noggin, his trainer would paint a new set of stitches on the mask. Over time, as you can see, he came to look like quite the badass. 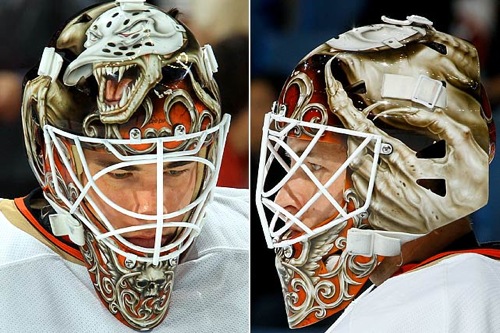 I’m sure some purists would disagree with my placement of Gerry Cheevers’ famous “stitches mask” as low as #5 and behind a relative unknown like this mask from Curtin McElhinney. But evaluating the two strictly in terms of their ability to induce shivers, I think you really have to give the upper hand to McElhinney. McElhinney is currently playing in the AHL, and played in the NHL most recently with the Senators. But when he was with the Ducks during the 2009-10 and 2010-11 seasons, he had one of the nastiest, creepiest, most terrifying hockey masks I have ever seen. It was so creepy, in fact, that it actually made Anaheim’s the lame mascot (the “mighty” duck) seem intimidating. 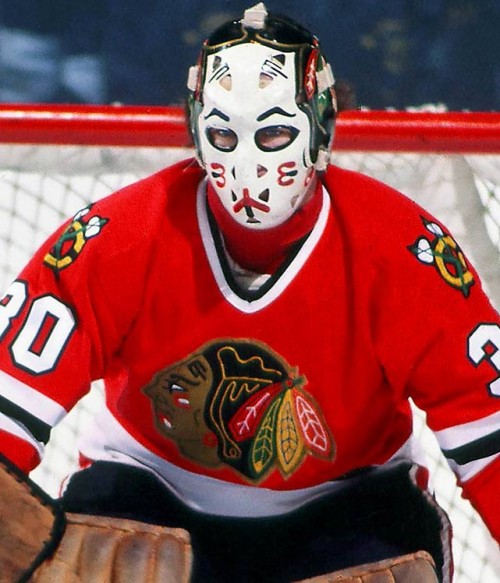 Bannerman played 7 season for the Blackhawks (1980-87), and for the most part was a slightly above average NHL netminder. His mask, however, belongs in the scary goalie mask Hall of Fame. Those classic white goalie masks look scary enough on their own. (It’s no coincidence that Jason from Friday the 13th wore one.) But for some reason, when you add Native American war paint, they become absolutely unnerving. 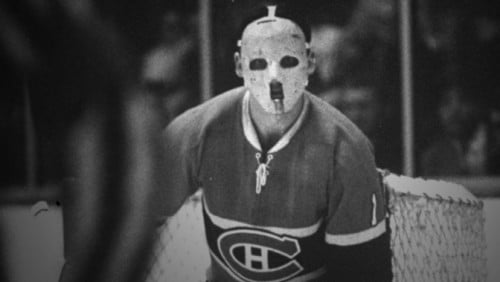 The very first full-face mask we ever saw is still one of the scariest in the history of the game. The funny thing is, Jacques Plante’s mask probably wasn’t intended to be “scary.” I’m sure they were just trying to be functional. But there is just something utterly petrifying about the way a man’s eyes look so cold and lifeless peering out from that smooth mouth-less visage. 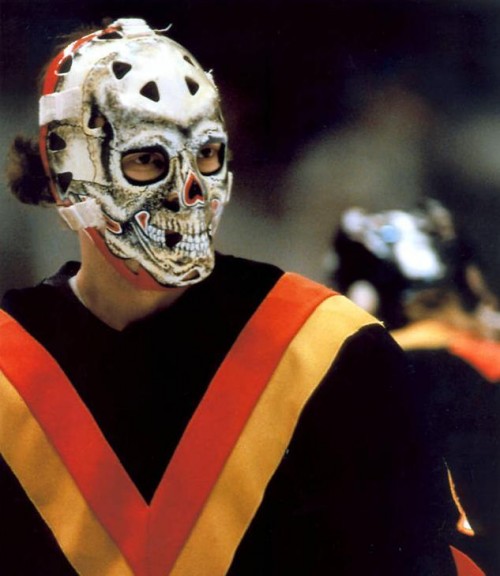 The #1 scariest hockey mask of all time was the mask worn by Gary Bromley during his years with the Vancouver Canucks (1978-81). The backup goalie got the idea from his nickname, which for some reason was “bones.” It’s quite possible that the mask wouldn’t have been as terrifying if played for another team and wasn’t wearing those God-awful “V” sweaters the Canucks used to have. But he did play for the Canucks and he did wear that hideous sweater. And the result was that he looked more like a sinister movie villain than a hockey goalie.