>Total Pro Sports
NFL
Was There A UFO On Sunday Night Football? (Video)

Was There A UFO On Sunday Night Football? (Video) 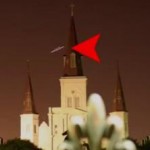 During the New Orleans Saints’ Sunday night beatdown against the Indianapolis Colts on October 23rd, Drew Brees touchdown passes weren’t the only thing soaring through the air in Louisiana.  NBC cameras caught something else flying around the Saint Louis Cathedral near the Superdome, and it certainly wasn’t a bird or a plane.

A UFO, perhaps?  We won’t jump to any conclusions here, but this is something you may want to see for yourself.

Hat Tip – [Outside The Boxscore]