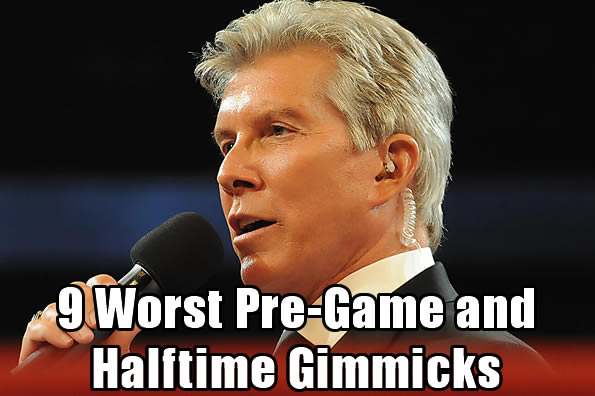 While sporting events are always intended to be spectacles to be embraced by fans and non-fans alike, it’s easy to get carried away and offer up some pretty asinine pre-game and halftime ceremonies (some official, some…not) that just make everyone groan.

Sometimes sporting events should just focus on sports and leave the pomp and circumstances for royal weddings.

Someone didn’t get enough attention as a kid, so they decided to make up for it later in life by ruining sporting events with a parachute and a fan strapped to their back. Though James Miller has taken his unique brand of aeronautics to many sporting events, the funniest and most enjoyable appearance of his was actually supposed to precede the event, as all his other appearances had, but a technical glitch (possibly in his brain) didn’t see him crash the Bowe-Holyfield fight until the seventh round, at which point he got tangled in some overhead light cables, then was ripped from his parachute and beaten until he was unconscious.

Not one to learn his lesson, he pulled the same stunt at a Raiders game (A RAIDERS GAME!) a year later. Fortunately, he didn’t land in the stands on that one.

In 2002, he hung himself. Probably the smart move on his part.

8. Rappelling Down To Drop The Ceremonial First Puck

Talk about gilding the lily. I don’t know why this was scheduled for when it was. Could they not hold off until Veterans Day? More importantly, could they not have a military official, active or retired, just walk out there and toss the puck?

This seemed like one of those things that would have about a one-in-a-billion chance of going right. The fact that it went off is a testament to their good planning, but what are the odds this guy doesn’t somehow get stuck or fall, delaying the face-off 23 minutes?

This is actually a recurring thing, if you consider Nickelback and Creed the same band, which I do. I was in attendance for this debacle, which was pretty damn funny. In 2001, Creed played the Dallas Cowboys Thanksgiving game halftime show, which I guess is innocent enough. I mean, they’re horrible, but there’s nothing that can be done about how bad they were at that stage in the game, so it was easy enough to excuse yourself to a bar. Along with Creed were some Cirque de Soleil folks who were winding themselves up in fabric and doing their thing. There were also something like a thousand doves or pigeons that were to be let out upon the conclusion of Creed’s suckfest.

Well, everything went as planned. Creed played their predictably bad music, fireworks went off, and the doves were released. The only problem was…Cowboys Stadium was pretty much a dome. So if those pigeons wanted out, they would have to climb through the narrow opening.

The birds did not do that. They exited to the sides, which meant that they flew into windows, luxury boxes, and the concourse.

I haven’t seen birds released indoors since that day.

6. Any First Pitch By An Elderly Person Or Non-Athlete

Can’t we just have a collective cringe before the game and save these poor saps the embarrassment of demonstrating that they can’t make it to home plate without two-hopping it? Sure, when a celebrity is able to fire the ball into the strike zone with any sort of velocity, it’s a pleasant surprise, but otherwise it’s no fun for anyone involved. If you want to cash in on a celebrity appearance, that’s fine, but why make them perform an athletic action that will soon be upstaged by 22 professionals? It’s mean.

5. Celebrity Coin Flips (Again, Any One…Ever)
This one is just gratuitous. I know some traditionalists will argue that this is nice gesture to nod to a famous alumni or fan, but I just don’t care. Matthew McConaughey is gonna toss for Texas? Don’t care. Reggie White is gonna toss for a Packers game? That’s impressive, but only because he’s been dead for a decade. Ok. Let me revise my statement. Unless you’re going to have a reanimated person who has been dead for at least four years, don’t bother me with the coinflip. I would rather you just do it in private and get the game moving. I know there are commercials involved, though, so this will fall on deaf ears.

The only coin flip I would want to see on national TV is this one:

Boxing is certainly about spectacle, and that’s a large part of the sport’s charm. Michael Buffer (see below), weigh-ins (see below), and other gimmicks seem to now overshadow the fight at hand. However, no one has ever milked their time in the spotlight like Prince Naseem Hamed. It was cute at first, but after a while it just seemed tedious, desparate, and sad, like an adult trying get the wave going at a sporting event.

According to Wikipedia, the last bastion of all information, good and true, Hamed has entered fights “via a Chevrolet Impala, a flying carpet, an elevator, and a palanquin; re-enacting the video of Michael Jackson’s Thriller; and wearing a Halloween mask. He was also known for his front somersault over the top rope into the ring.”

You want to make some over the top spectacle? That’s totally cool. Just make it quick.

It wasn’t lingerie, it wasn’t football, but boy was it stupid.

2. Michael Buffer For Other Sports

No, Michael, we are not “ready to rumble” because this is a football game. We only rumble at boxing matches. You’ve got a good thing going with your boxing announcing – there’s no reason to cheapen it. Well, actually there is. Michael Buffer reportedly has been paid as much as $1 million to show up and bellow his catch phrase for teams like the Dallas Cowboys and Detroit Lions.

Ok. So there’s a good reason to do it, but that doesn’t make it any less lame for the fans.

They stare each other down for the cameras and flex – that’s fine. They make their statements, that’s cool too. But the manufactured vitriol between the fighters for the sake of spectacle is just painful. It’s three days before the fight. Do we really think you’re going to risk your paycheck by coming to blows 48 hours before earning $25 million? No, we don’t, even if we might secretly hope you’re dumb enough to.

This is how it goes down. Someone says something at the press conference, one of the boxers stands up, then their entourages race up and all collectively hold themselves back from engaging in the non-fight that has presented itself.

I’m looking at you, Floyd Mayweather.