BYU Fan Struts His Stuff In The Stands (Video) 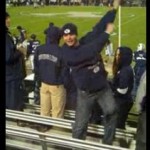 With a 7-3 record through the first ten games of the NCAA football season, the Brigham Young Cougars are currently tied with the Notre Dame Fighting Irish for the best record among the four Division IA Independent teams, and they are in a great position to earn an invitation to a Bowl game.

Their latest win was a 42-7 trouncing over Idaho last Saturday night, and with the fans in LaVell Edwards Stadium all liquored up after a full day of tailgating, they were ready to celebrate the victory by doing some dancing in the streets seats…

Well, at least this guys was.  You can check out his sweet moves in the video below.