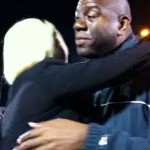 Veterans Day seems like the perfect day for a member of the armed forces to get down on one knee and propose to their significant other.  This man seemed to think so, although he felt he needed more than just the aura surrounding that special day to convince his woman.  Thankfully, Magic Johnson was present on the USS Carl Vinson when the proposal took place during the 2011 Carrier Classic between the North Carolina Tar Heels and the Michigan State Spartans.

Johnson was even kind enough to accompany the man on one knee, giving the woman no choice but to accept the proposal.  And interestingly enough, all that the future groom received was a high-five from his future bride following the acceptance, while Johnson received a full-out hug.

It will be interesting to see what happens to this relationship once the woman realizes that Magic Johnson isn’t a part of the package she accepted.