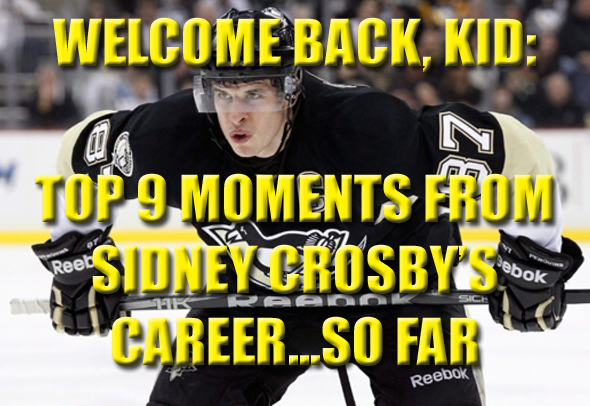 The Pittsburgh Penguins’ Sidney Crosby just spent the last ten months battling post-concussion symptoms—an absence so long that some were beginning to wonder whether his hockey career might be in jeopardy. However, last night Sid the Kid finally made his highly anticipated 2011-12 season debut, and once again all is right in the world of hockey.

So in honor of Crosby’s triumphant return—4 points on 2 goals and 2 assists is “triumphant,” right?—we thought it would be nice to take a tour of #87’s career highlights thus far. The guy may only be 24 years old, but you’d never know it by having a look at these amazing feats.

At 19 years, 9 months, 24 days, Crosby was the youngest NHL team captain in team history. Many wondered whether such a young and supposedly inexperienced player could really lead a hockey team. But it didn’t take long for Crosby to validate the faith Penguins team officials placed in him, and to show people that he was not a typical 19-year-old.

8. Gretzky-like assists against the Sens in 2010 Playoffs

At the very beginning of his NHL career, Crosby was constantly compared to Wayne Gretzky. That’s because no player since Gretzky had proven to be such a complete player at such a young age.

And almost immediately, Crosby put up points like a seasoned veteran. Sure, he didn’t score as much as Gretzky, but the two players are from different eras. In 1981-82, the average NHL team scored 321 goals. By contrast, last season, teams averaged only 229—an astronomical difference.

When you look at it this way (and I think you have to when comparing players from different eras), it’s clear that, relative to the league, Sid scores at about the same pace as Gretzky did early in his career.

But aside from a similar ability to score points, Sidney has shown in his career that he has a Gretzky-like spatial awareness and knack for setting up goals. The two highlight-reel assists above are perfect examples. And they’re from just one playoff game.

7. Sid puts it top-shelf backhander while falling down backwards

If any other player in the league scored a goal like this one against the Coyotes, you’d say it was just luck. But with Sidney Crosby you know it’s not luck. Or at least, it’s not entirely luck. That’s because he tends to score goals like this fairly often. (Okay sure, not every day. But there’s definitely a pattern.)

6. Dances past four New York Rangers to score a beauty

It was really hard to choose just one example from the plethora of Crosby’s amazing virtuoso efforts, but in the end I went with this one. Sid takes gets the puck in the neutral zone, turns on his turbo boosters, flies past four Rangers players, and puts the puck in the net. You know, no big deal.

Oh, and in case you were wondering, I was also considering going with this one:

Hardcore hockey fans are probably familiar with this Sid the Kid highlight. Sure, it’s from his days in the QMJHL (Quebec Major Junior Hockey League), but I think it still qualifies as a career highlight. I mean, the QMJHL isn’t exactly a soft league; probably a third of the NHL’s top prospects come from there. And people don’t just score goals like this every day. 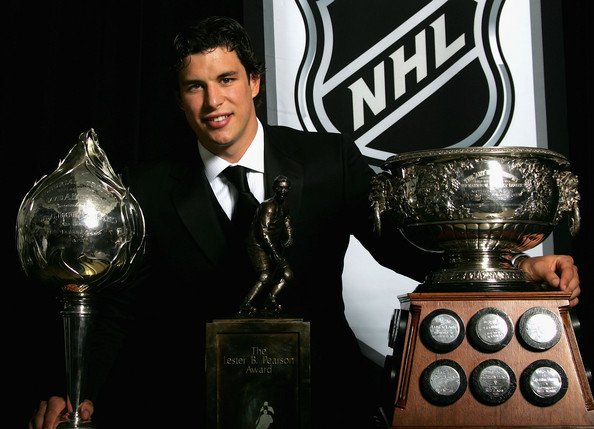 After posting 120 points on 36 goals and 84 assists during the 2006-07 NHL campaign—only his second season—Sidney Crosby won the Hart Trophy as the league’s most valuable player. At only 19 years old, he was the second-youngest MVP in league history. Who was the youngest player to win the MVP? If you can’t guess, you haven’t been paying attention. (It was Wayne Gretzky.)

Crosby was never really known as a pure goal scorer. But one of his most incredible qualities is his ability to make himself into any type of player his team needs him to be. And in 2009-2010, his team needed goals. So Sid stepped up and netted a league-high 51, earning his first (and probably not his last) Rocket Richard Trophy. Now, practically the only individual awards Sid has left to win are the Norris trophy for best defenseman and the Vezina trophy for best goalie. And honestly, I could kind of see him switching to D and winning the Norris.

Sidney Crosby was certainly not responsible for Team Canada winning the gold in men’s hockey at the 2010 Winter Olympics. He was surrounded by NHL all-stars. But you can’t argue with the facts. And the facts are that Crosby scored the goal that won the game and sent an entire nation into a frenzy. Was it a highlight reel goal? Nope. But when you’re a kid and you’re playing hockey (or any sport) in your backyard, it’s always the best player on the team (i.e. you) who wins the big game. So this moment was pretty surreal.

It didn’t take long for Sidney Crosby to attain the ultimate hockey prize. In 2008-09, Sid the Kid captained his Pittsburgh Penguins to a Stanley Cup victory in only his 4th NHL season. At 21 years, 10 months, and 5 days, he was the youngest NHL captain to ever hoist the Cup.

What had you accomplished by the time you were that age?